It was so nice to have slept in a bed last night at the Village Chalet in Oracle. Don’t get me wrong, I love sleeping in a tent miles from anywhere, but after doing that for a week it felt really good to be inside an A-Frame hotel room on a soft bed. One day I’ll live in an A-Frame, miles from anywhere, and that’s a G.D. promise. Marnie and Jim, the owners of the Village Chalet, are the epitome of ‘hiker friendly.’ You see that phrase used to describe a lot of places along the trails but these two are doing it right. This morning before driving us back to the trailhead, Jim drove me and QB to the Patio Cafe in town for breakfast. Patio Cafe had it going on. B had a Monte Christo sandwich and I had pork belly and eggs; a few items you don’t normally see on a breakfast menu. I definitely don’t eat enough pork belly. Then of course we both ate peach pie and ice cream.

We got back on trail around 12 and the rest of the day was nice and relaxing. Near a trailhead we passed 4 older women and one of them loved QB’s pink hair so much she said so and reached out and grabbed one of her braids. It was funny and sweet and stuff but I thought it was a little weird, like most people ask before they pet someone’s golden retriever nevermind grab a strangers braid to see if it’s real. Whatever, QB didn’t seem to mind and this woman obviously didn’t give a shit. Later on we ran into an Arizona Trail crew with the AZTA and they were running a training program with high school kids. It was cool, they hooked us up with some sodas and told us a little about what they were up to. The rest of the afternoon we walked up and down gentle hills on nicely kept trail through the desert. We walked along lots of saguaro cacti and had views of big mountains in the distance. Right before sunset we called it a day, set up camp, watched the sun drop and the stars come out. 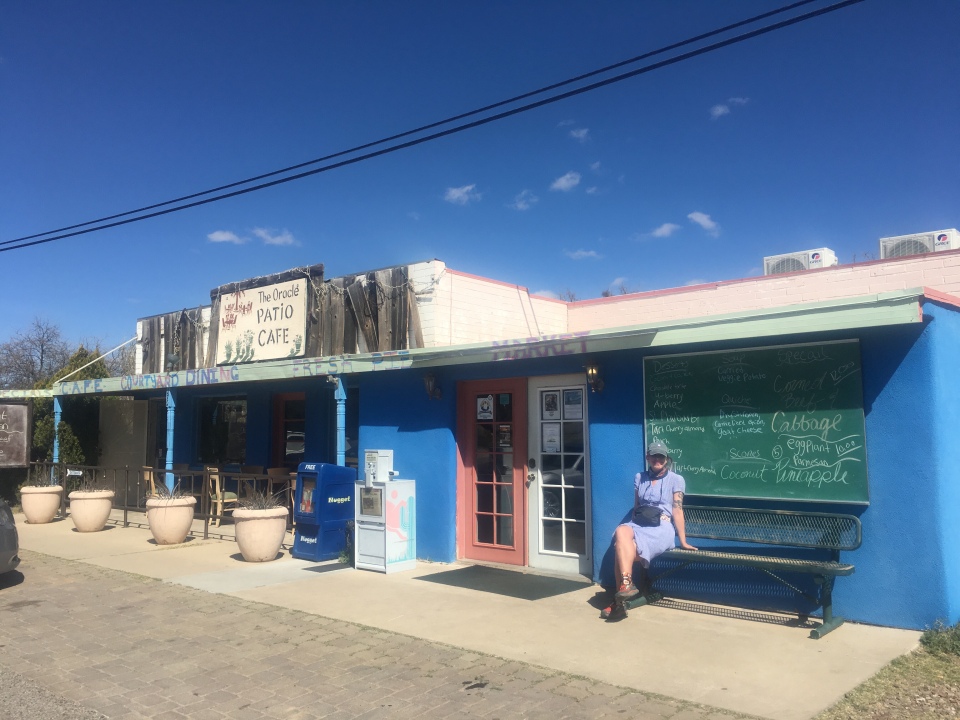 I thought today was going to be miserable. When I got out of the tent this morning it was cold with dark gray skies in every direction. All I could do was start walking. It did rain here and there and it was windy and cold but the sky produced a rainbow so that was cool, and by 11 the sun came out and warmed us up. The rest of the day was cool but sunny, ideal for walking through the desert. We crossed paths with Big Sky who was going east on the Grand Enchantment Trail or GET and talked with him for a little bit. The GET goes from somewhere near Phoenix to somewhere near Albuquerque(I think). It’s on my things to do list but not yet. Later on this afternoon we came to a trailhead and ran into Sequoia who was camping there and providing hikers with trail magic. He hooked us up! Grill cheese sandwiches, fresh oranges, sodas, packets of salsa and hot sauce and was a wealth of info on what we would find ahead on trail. After hanging out with Sequoia and his sweet dog for awhile we got back at it and walked another 8 or so miles. Around sunset we found a flat spot to camp and called it a day. 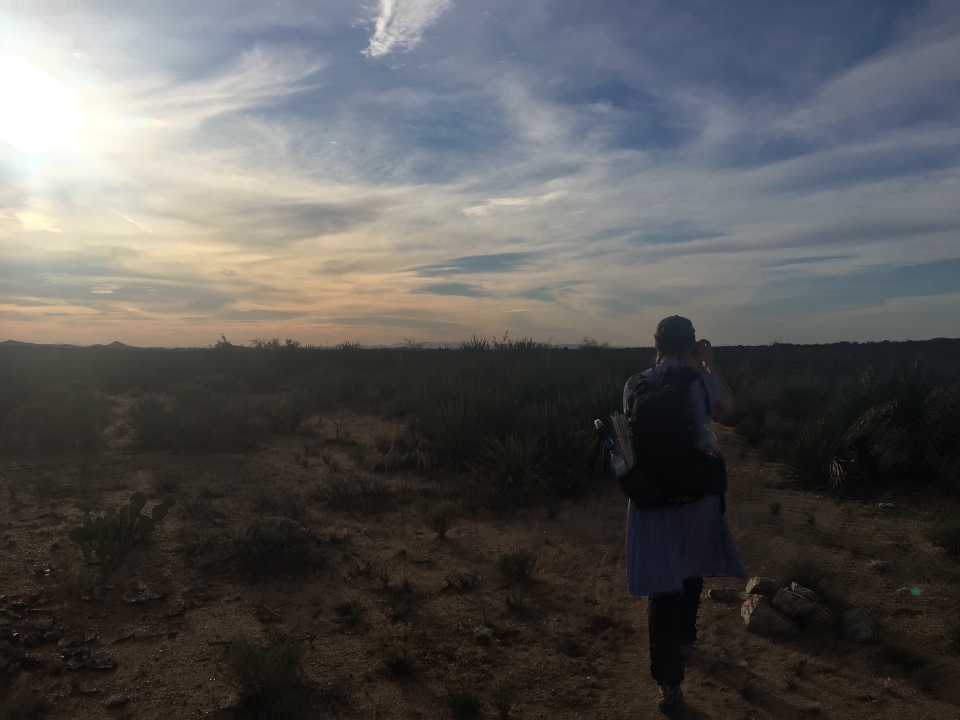 This morning was crisp and cool but sunny as we cruised through open range desert. My mind was wandering and a few times I got off trail by following cow paths that wound up going nowhere but looked eerily similar to the AZT. We saw a couple of weird things today; first was this big huge Crocodile Dundee knife sitting on a cairn on the side of the trail, then a few miles later was a stray or wild dog walking with a limp in the middle of nowhere. Neither of those things were all that remarkable but strange enough that they were worth noting. Around noon time we climbed a big hill appropriately named ‘Big Hill’ and then walked along a ridge on top of it with big time views of a huge copper mine. We met a handful of GET’ers today; Iron Mike, the Punisher, Trail Dale, and Ledge. It seems like many of the hikers on the Grand Enchantment Trail are seasoned thru hikers and it’s been fun to talk to them about some of the other trails they’ve hiked and trails they recommend. Maybe it’s because the GET is lesser known and people who are new to thru hiking opt for one of the more popular trails.

Yesterday while talking to Sequoia he told us there’s this place ‘Old Time Pizza’ in Kearney, AZ that will deliver pizza to the trail. Once we got close to the town we called Lorraine at Old Time from one trailhead and she delivered a gigantic delicious pepperoni pizza and a couple of sodas to us a few miles later at another trailhead. I’ve heard of stuff like this happening before but this was the first time I’ve had pizza delivered to me on trail and it was a real treat. After we ate we laid around in a food coma for a little while then walked a few more miles. We crossed the Gila River(the same river the CDT crosses something like 200 times in New Mexico) then walked alongside the river through a bunch of Saguaro Cactuses before finding a spot to camp. I got myself pricked pretty good by a cactus looking for a spot and it’s not quite as funny as the cartoons make it out to be.

Today started off easy enough. We contoured along the side of a valley in and out of drainage ditches loosely following the Gila River for about a dozen miles. Around noon time we stopped to eat and fill up our bottles with river water before cutting into some mountains for a long dry stretch. We cut away from the Gila for a 14 mile stretch to a water cache that didn’t seem too promising. Those 14 miles were hot and sunny and we were climbing and conserving water but they were definitely the best miles of the trail so far. I could try to describe what I saw or you could just look at the pictures below. The highlight of the day was while we were up on a ridge I was just walking along minding my own business and a Gila Monster walked right out in front of me. A Gila Monster!! I couldn’t believe my eyes, I’ve heard of these mythical creatures but never dreamed I’d actually be able to see one up close and personal. I’m terrified of snakes but for some reason giant lizards don’t scare me. Now if I could only see a desert tortoise all of my wildest dreams would come true. When we got to the water cache there was very little left but luckily QB and I both carried an extra liter and have enough water to survive. We walked another quarter mile before finding a campsite and for whatever reason I was legit beat by the end of the day. Resting these weary feet right now. 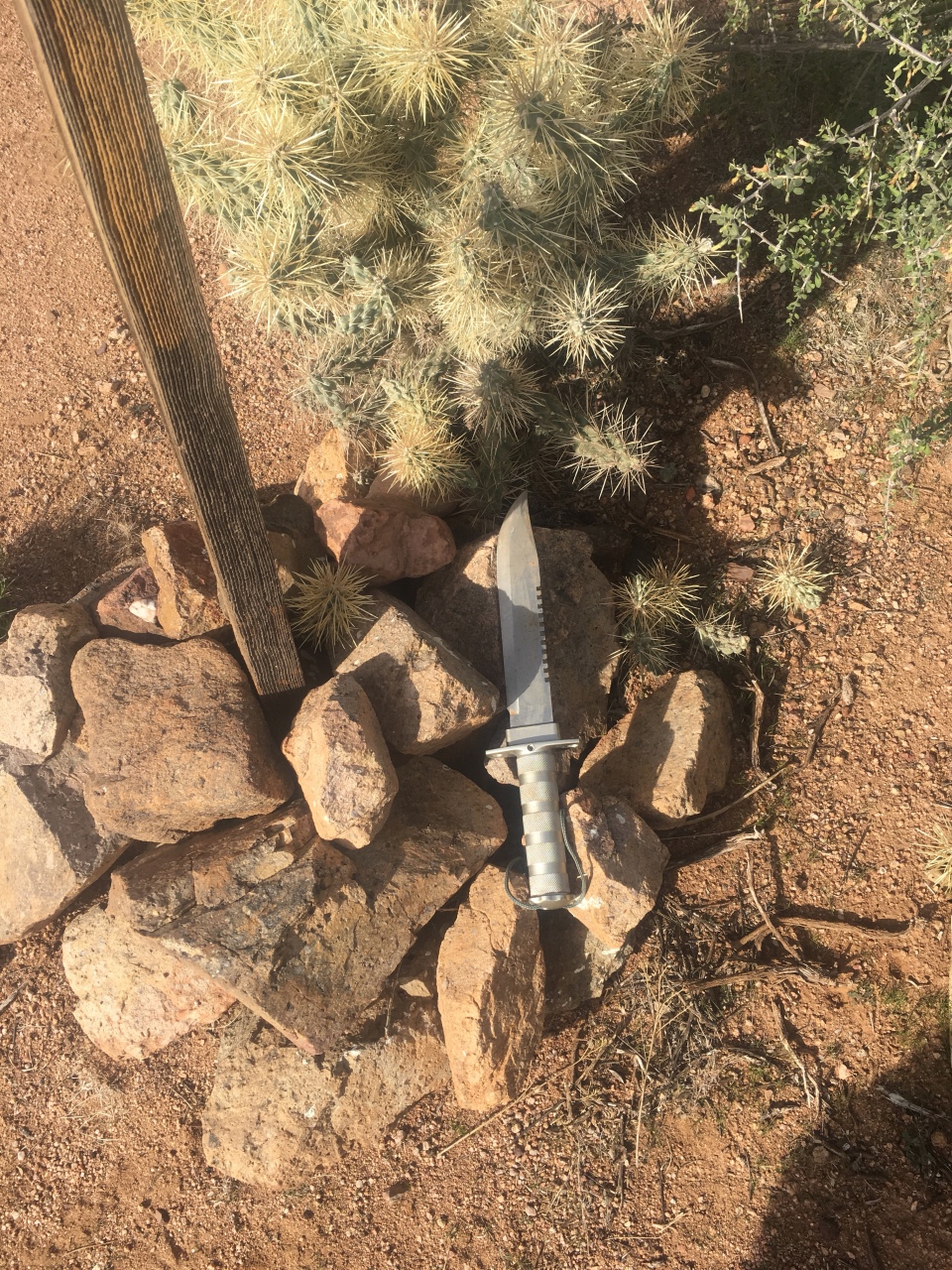 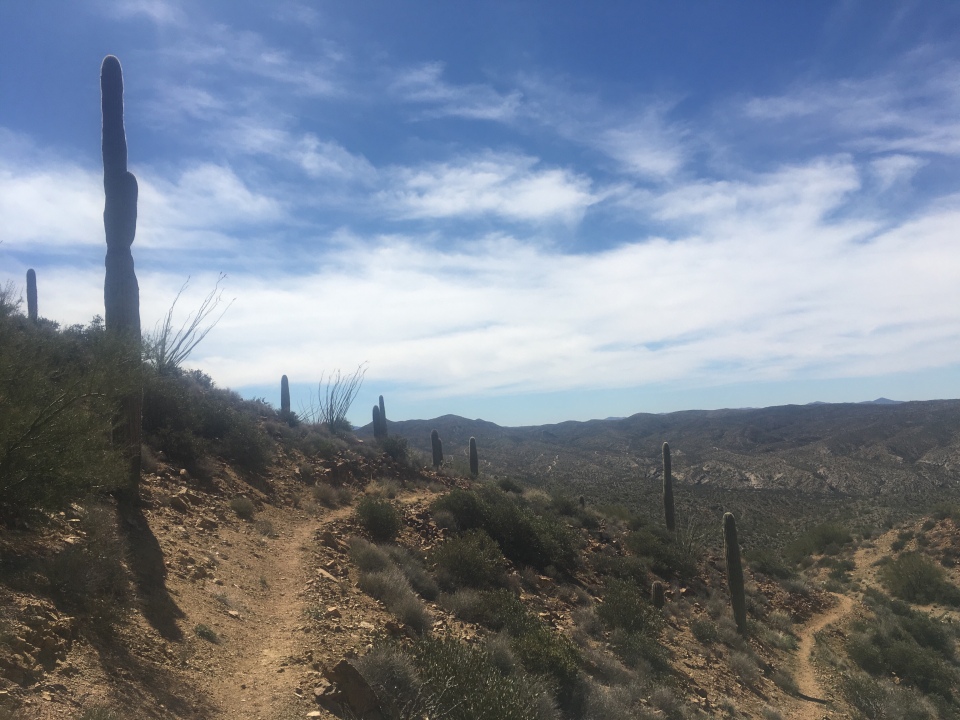 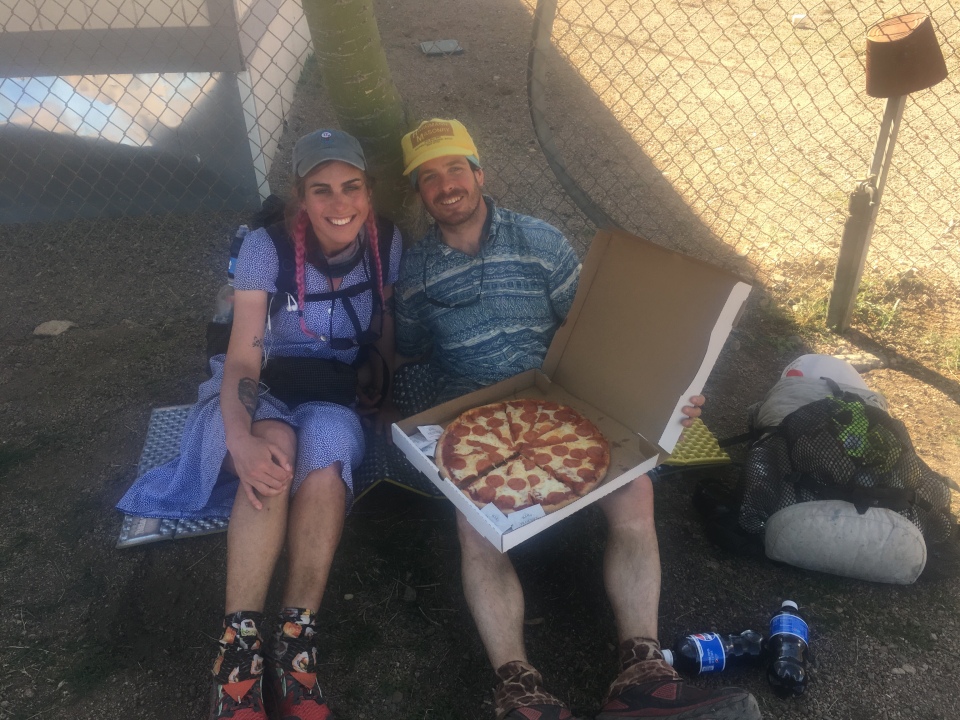 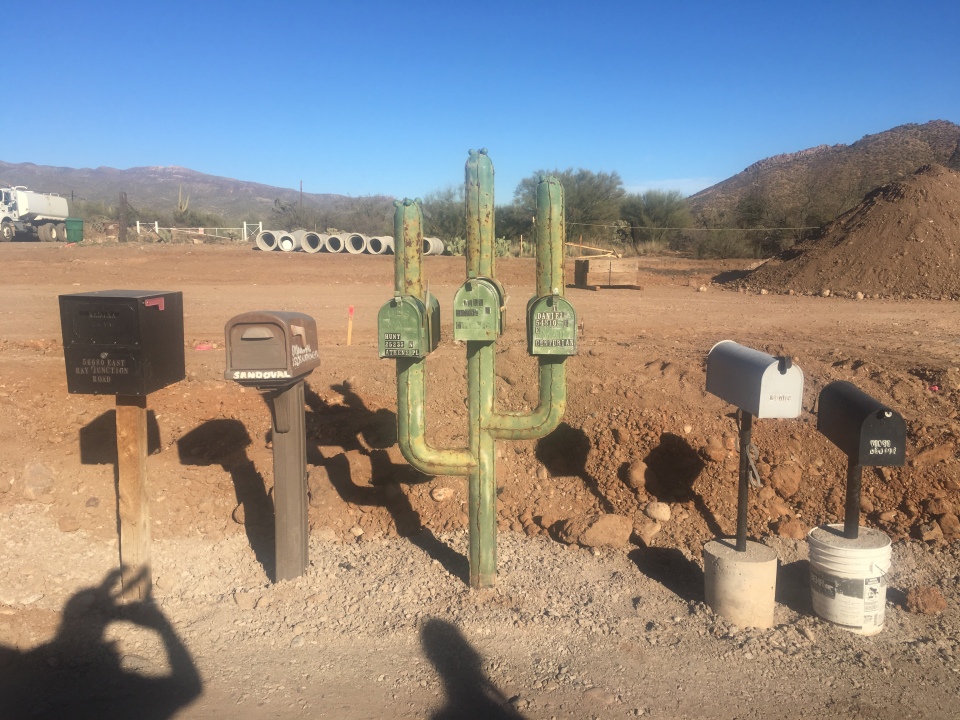 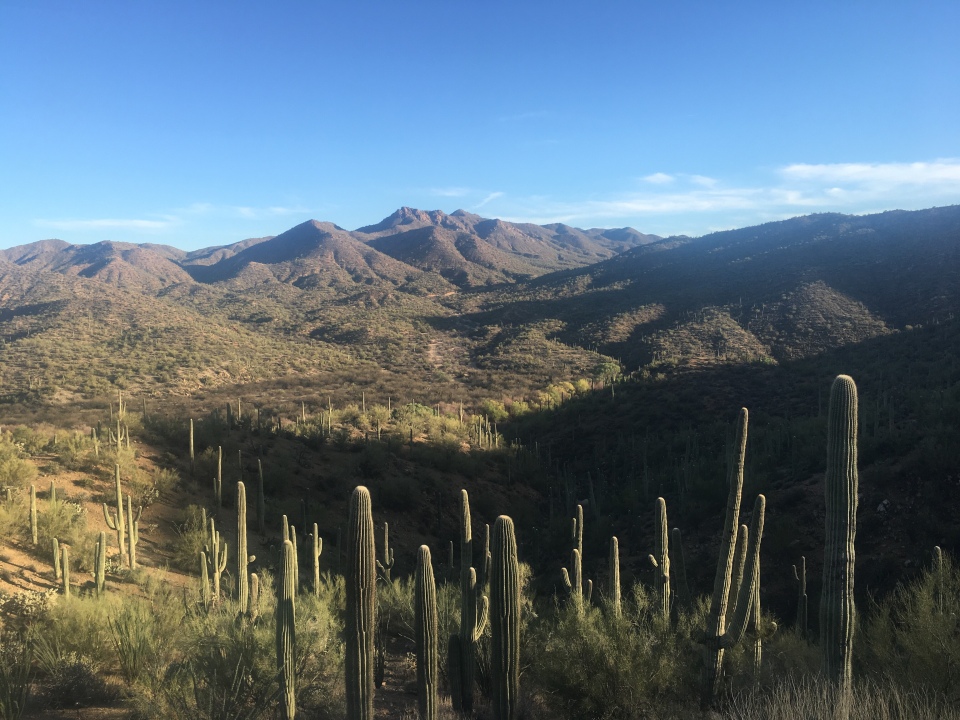 Town day is always exciting. This mornings miles breezed right by and soon after we walked around scenic Picketpost mountain we had our thumbs out on rt 60 hitching a ride to the town of Superior. 10-15 minutes later John, a local rancher, picked us up and drove us to the Copper Mountain Motel in this old mining town. Queen B and I got our room all squared away and then made a beeline for Porter’s Cafe where we inhaled bacon burgers, macaroni salad and French fries.

Back at the hotel I met a couple of other hikers; Socrosse and Tortuga. I didn’t know it right away but I actually met Tortuga a couple years ago while staying in a hut in the NH’s White Mountains while hiking the AT. I remember I got to the hut late and tried to trade chores with him so I could get out early but he wouldn’t budge. No big deal, I wouldn’t have traded chores if I was him either. He ended up being a pretty cool guy and I’m glad I ran into him again.

Tonight Diane and Ron, friends of my folks and Massachusetts transplants, drove out to Superior from their home in Chandler and took us to dinner. It was great to see them and always fun to share stories about the trail, especially while stuffing my face with Mexican food.

So 300 miles in and things are going well. I’m digging the trail, feeling good, QB and I are having fun, and enjoying the state of Arizona. If you like what you’ve been reading you can subscribe to this blog and or follow me on Instagram @endlesspsummer 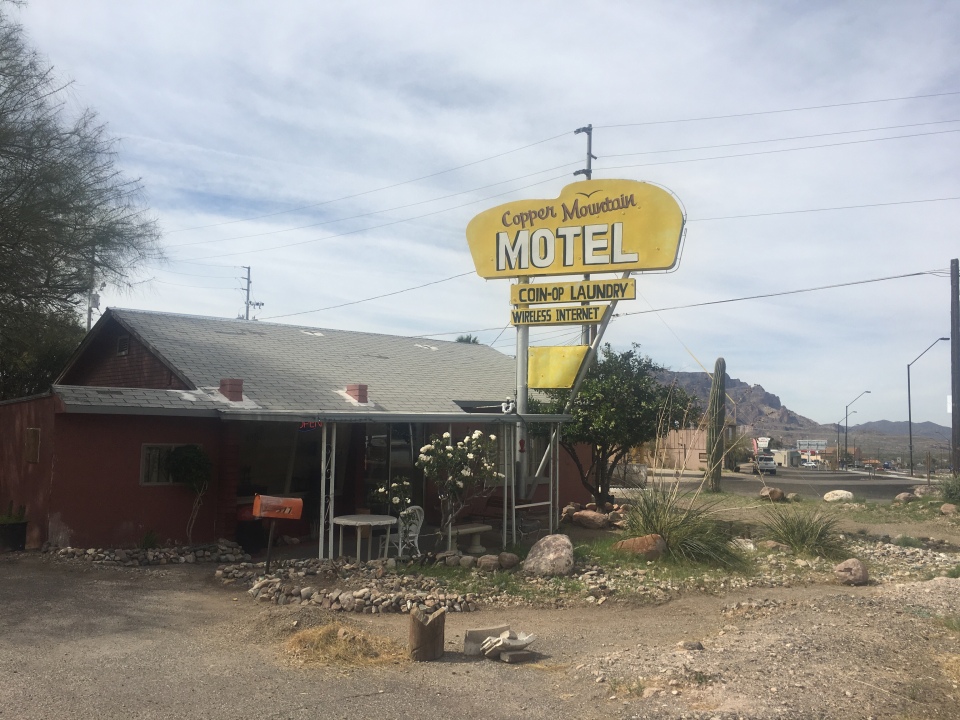 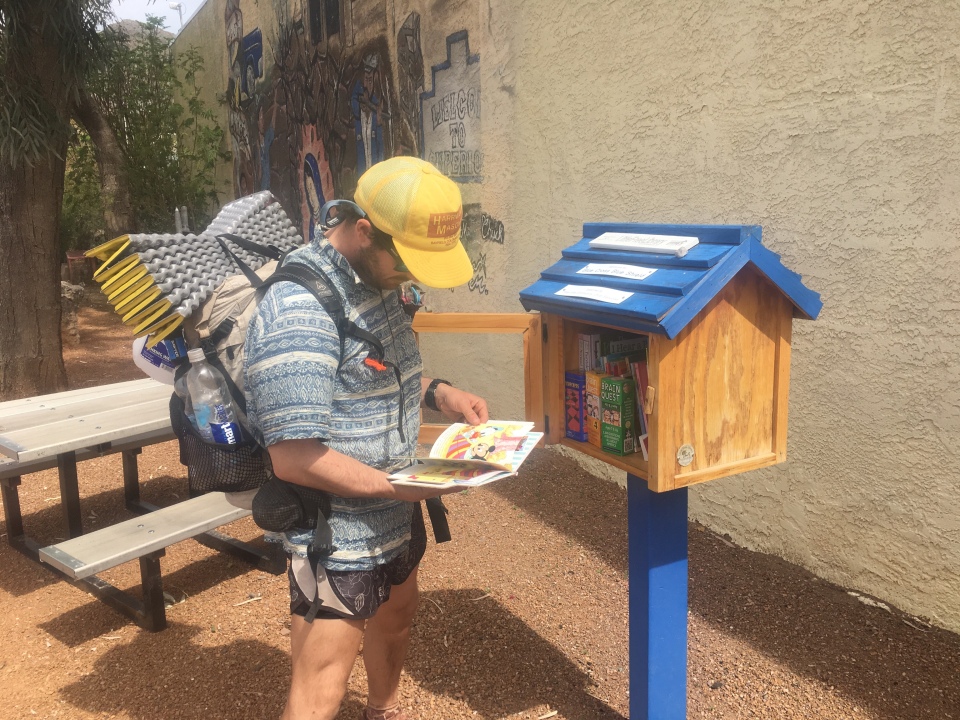