First thing this morning I put a nice beating on the continental breakfast at the Trade Wind Motel. It was a good one too, they had like 20 different boxes of cereal to choose from. I felt like I was in Jerry Seinfeld’s apartment. So many options but I gotta have my Pops, like 4 bowls of them. After breakfast we hit the trail, actually a road. For miles we walked along pavement and it was not ideal. We crossed under I-90 and it turned to dirt road which was better. This section of trail, about 52 miles today and yesterday, is actually an alternate of the official trail. The regular route is east of here near the city of Butte and a good deal longer. I originally planned on going that way but I heard that was also a lot of road walking and I don’t think I missed too much. Another time. Besides the city of Anaconda though, which was cool, the last two days have been a bit of a slog. I definitely was excited to be back on trail when we got there this evening. Road walking on dirt road is one thing but pavement walking is for the birds, especially highways with lots of cars. What’s cool about taking the Anaconda route is that all of a sudden we’re around a bunch of other hikers. The CDT is weird. Sometimes it seemed as if we would get into these vacuums where we would barely see other hikers for hundreds of miles but lately lots of hikers have been taking different alternates and all seem to be converging at the same time and place. We’re seeing lots of people. Pei Mei and his crew caught up and we walked with some of them today after not seeing them for a couple of states. Shortly after getting back on the official trail QB and I found a good spot to camp and called it a  night.

Anaconda Stack, this is one of the biggest smokestacks in the world and is now a state park. Google it for some interesting info

I did this for miles

and then some of this

this guy George gives water to hikers at his hunting camp

Today was relaxing. Just crushed miles all day and the trail didn’t have anything too spectacular for us but at the same time was pretty easy. While QB and I were taking a little break this morning Spirit came bombing by. We hadn’t seen him since near Breckinridge so we talked for a few minutes and then leap frogged with him a couple times today. At some point this afternoon we caught up to Griggs and walked with him for a few hours. We hadn’t seen him since he passed us climbing up the Argentine Spine. He’s been staying on the official route and absolutely crushing this trail, the only reason we caught him was because we took the shorter Anaconda route and he took the Red(official) route going to Butte. We moved right along while hiking with him but the 3 of us missed a turn and went a half mile the wrong way before realizing our mistake and doubling back. In everybody’s defense the turn really wasn’t marked all that well. Queen B and I walked a couple more hours before finding a campsite. While we were eating gummy bears or whatever, Bones, who we last saw near Breckinridge, walked up with a headlamp on. He was trying to catch Spirit but decided to camp here also. 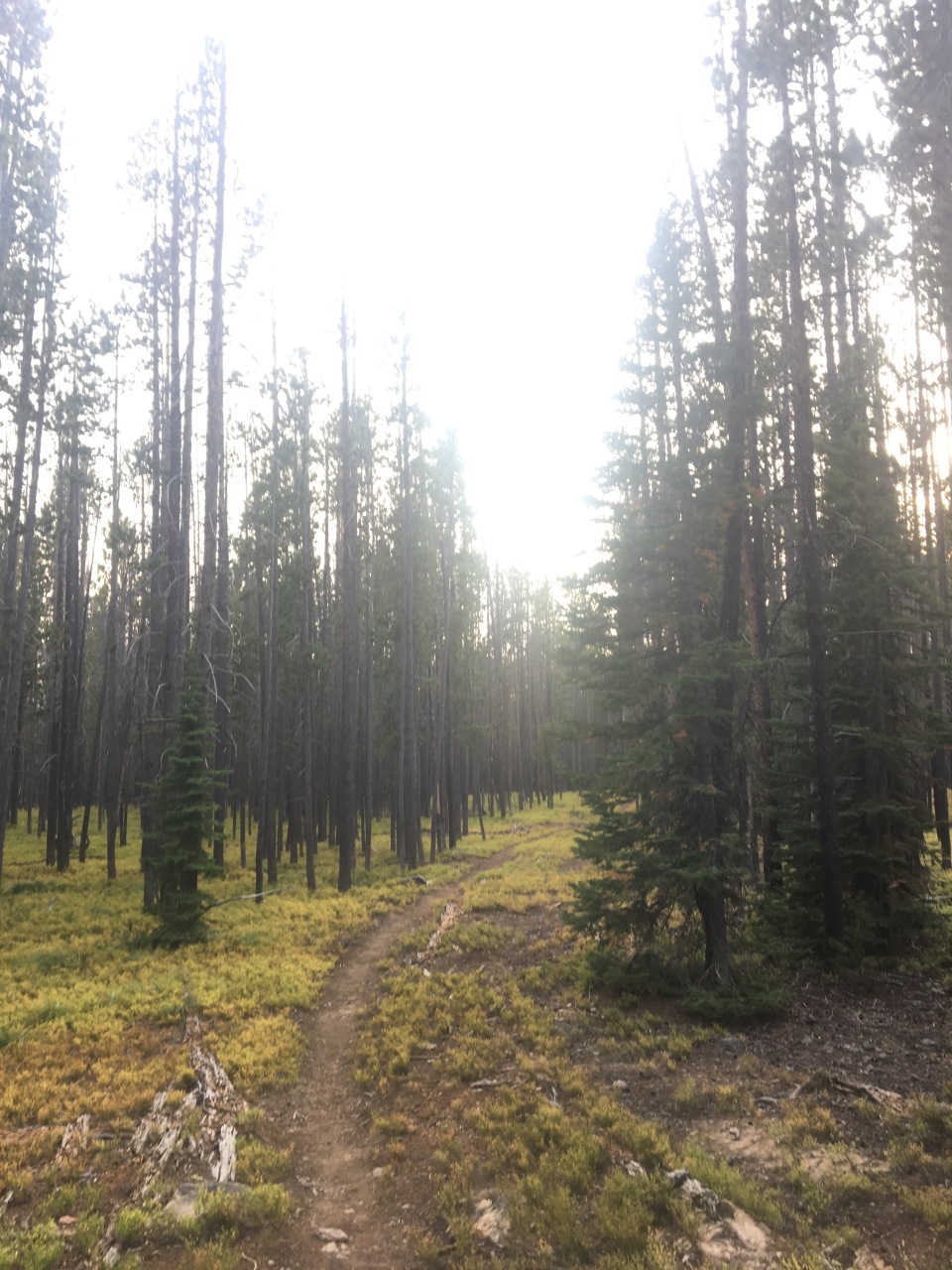 The trail was a bit bland today. Easy but bland. Although it’s been enjoyable, this whole section since Anaconda has been somewhat dull as far as the CDT goes. We walked a soft dirt path for awhile through a lodge pole pine forest and then joined a dirt road for miles. We walked in and out of the forest and over a few open meadows until we got to MacDonald Pass. Everything was all good today except for one mile that had tons of blowdowns that we had to walk over, under or around. A total nuisance. At the pass we put our thumbs out and the first truck that went by turned around and picked us up and took us into Helena. Hitchhiking with QB is pretty easy. Ted, a retiree and avid hiker, along with his dog Trip, took us all the way to our hotel and even offered us a ride back to the trail on Monday. We’re planning to take a day off here tomorrow and enjoy the capital so we took care of our resupply tonight then went to dinner downtown before crashing out for the night. 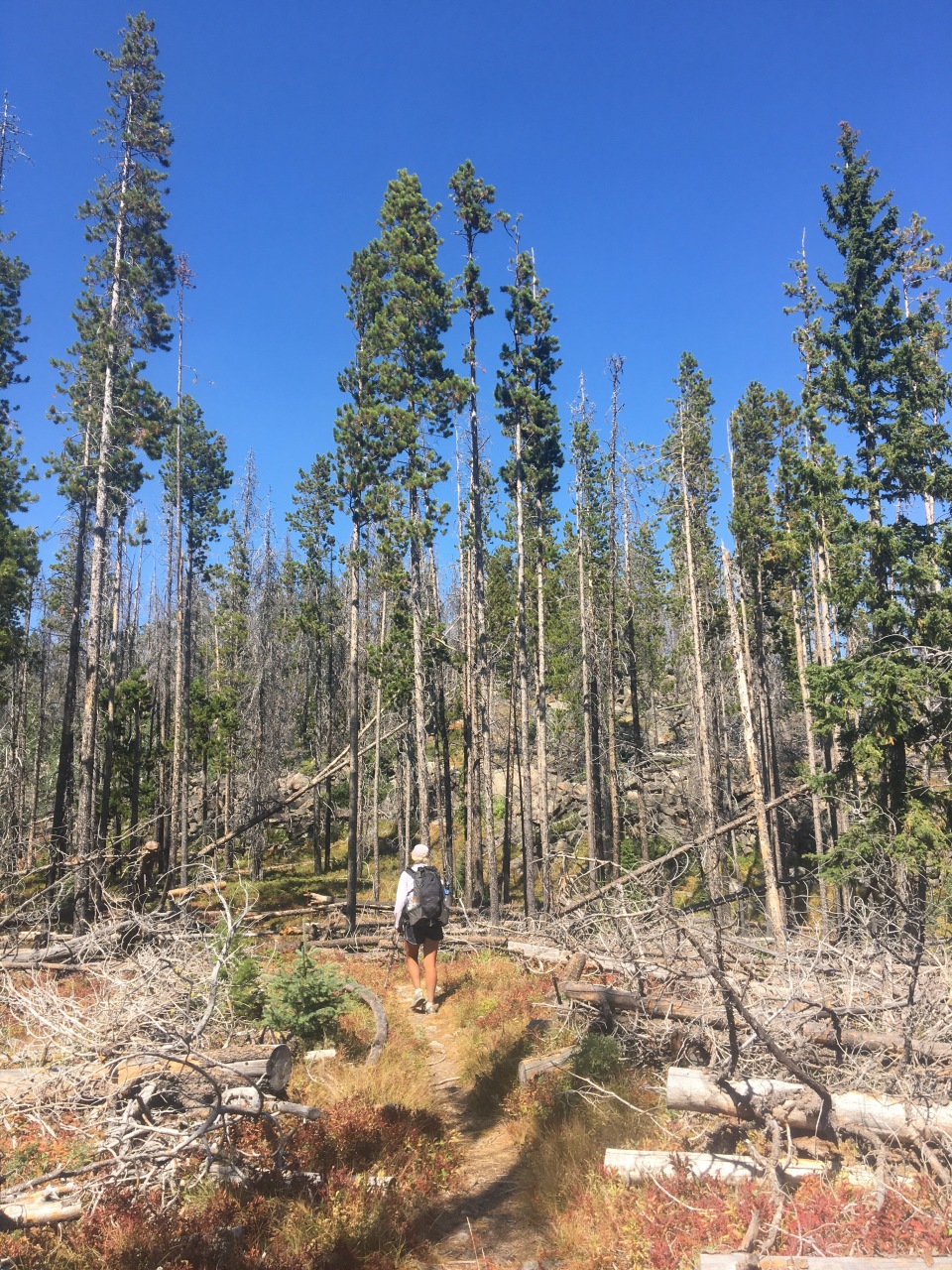 a view of the valley from MacDonald pass

Took the day off today to enjoy Montana’s capital city, Helena, and possibly our last zero on this trail. Helena is a nice little city rich in gold mining history. At one time it had the highest concentration of millionaires in the world living in it, or something like that. Queen B and I took a nice little walking tour of the city this morning and it was cool. First of all we switched hotels to one closer to downtown so while we walked there we explored the State House and ran a few other little errands. The other day one of my trekking poles got stuck closed to the point that it was rendered useless. So we had to go to a gear shop and instead of selling me new sticks, they let me borrow some pliers and with a little bit of effort I fixed the stuck one. We also checked out the St. Helena Cathedral, the original governor’s mansion, and a really cool art museum but the name is escaping me right now. It was a regular good old fashioned walking tour of a state capital on a nice 95 degree day. Today also included McDonald’s for breakfast, pizza, gigantic burritos, and ice cream. It was a very enjoyable day off. 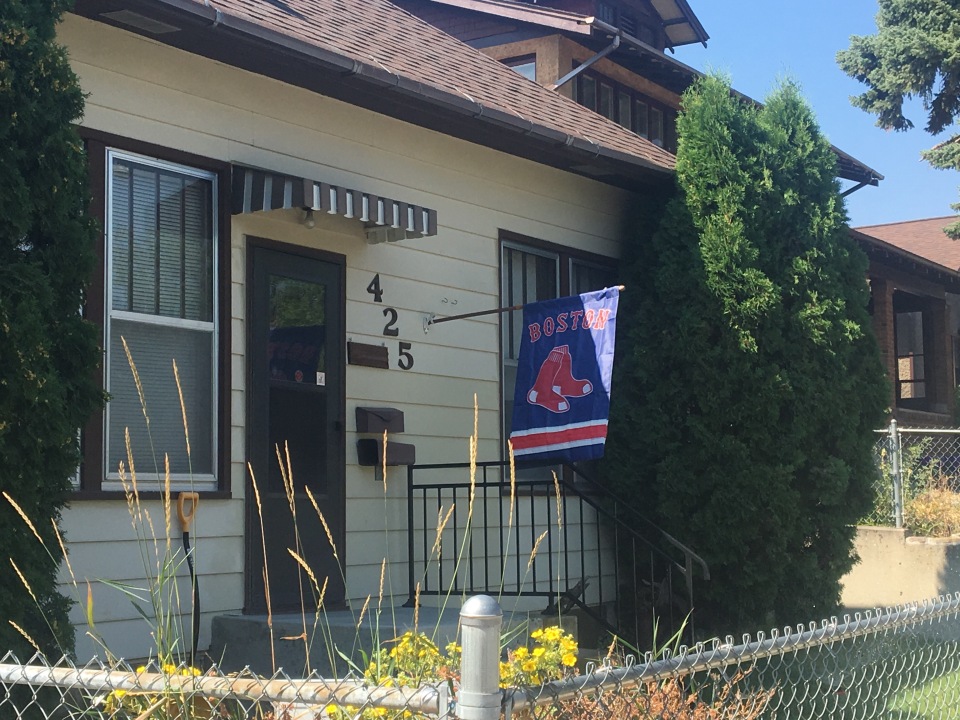 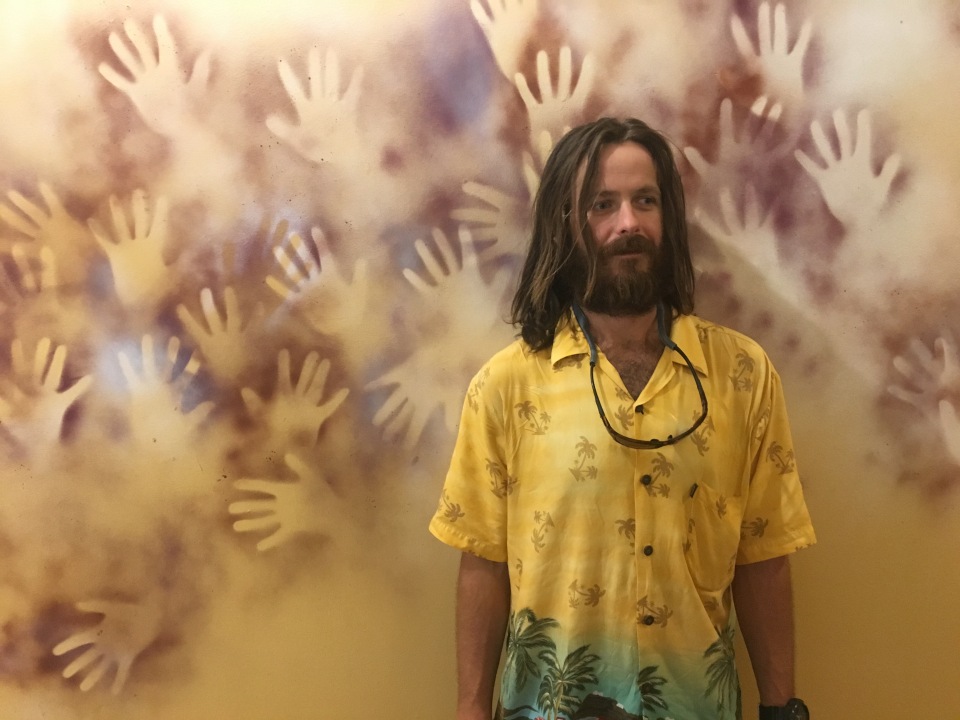 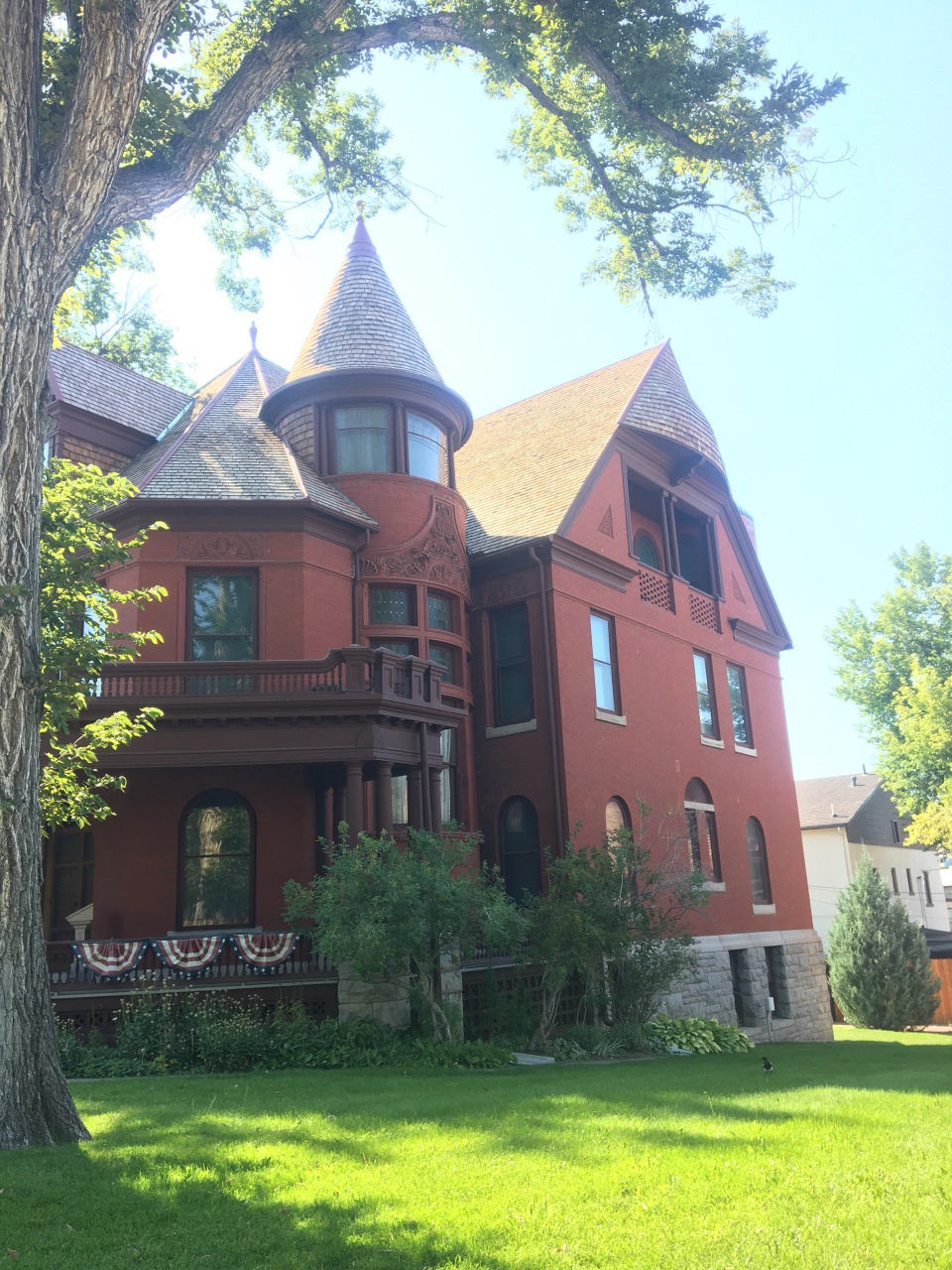 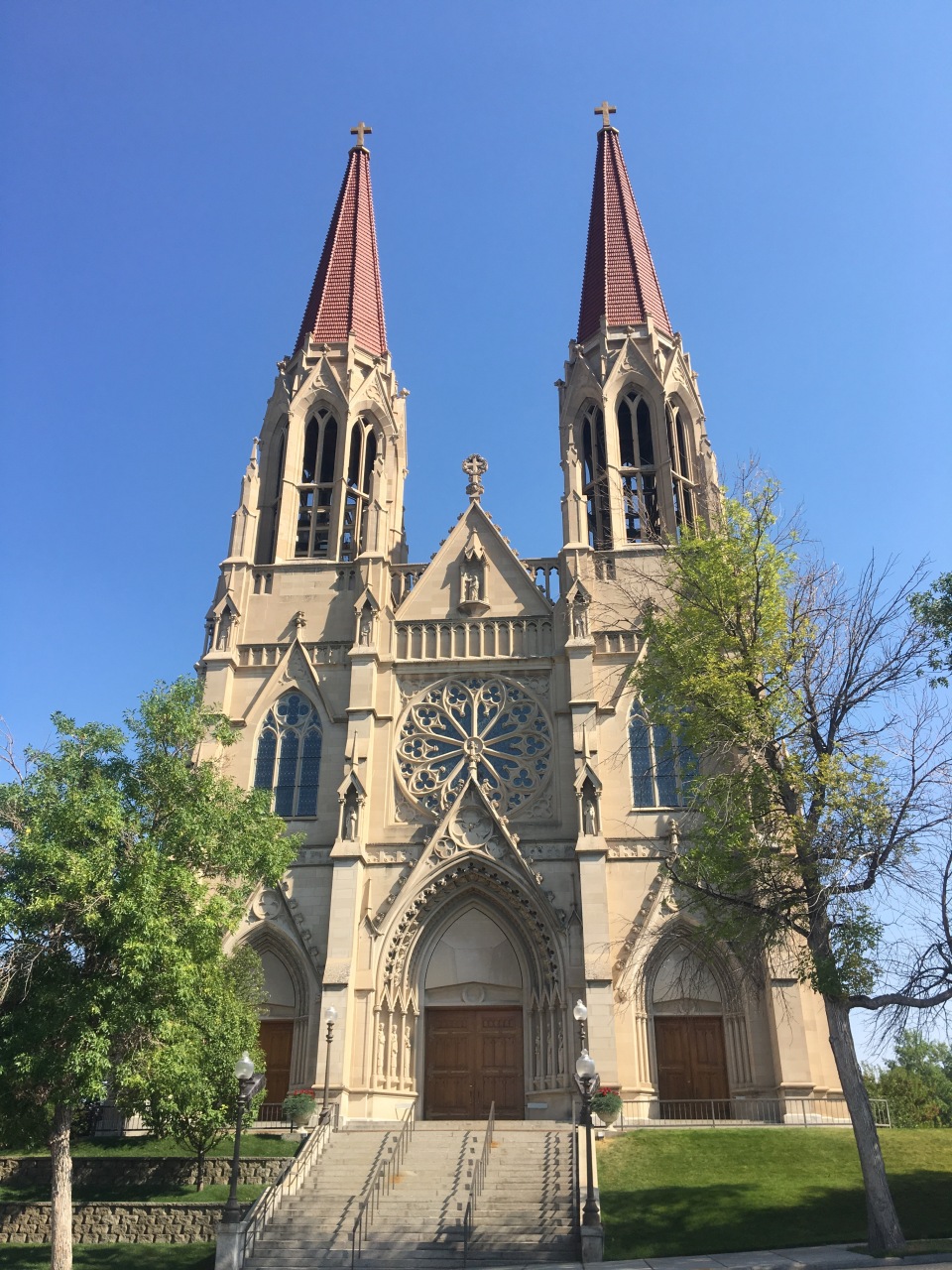 St. Helena’s Cathedral, I’m not against incredible architecture. This building is impressive. 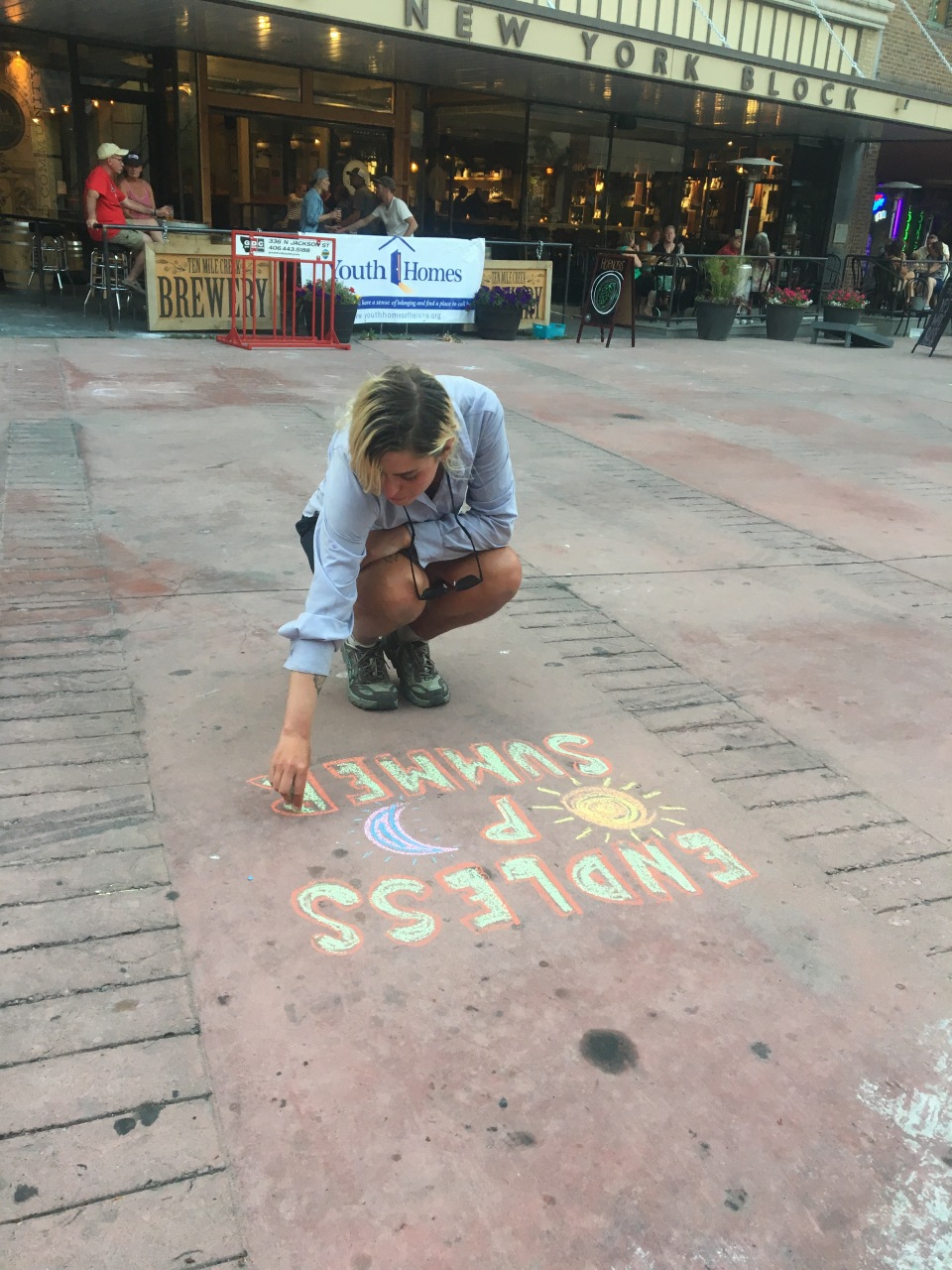 QB beautifying the sidewalk with a chalk mural

This morning we got breakfast down the street and looked over the upcoming section that includes a potential fire closure and reroute situation up ahead. After breakfast we went back to the hotel and noticed some of the other hikers had fresh haircuts. These guys bought clippers in town so we borrowed them and I gave QB a haircut. Not really, I just shaved the lower half of her head, I guess that’s all the rage these days. We then started back to the trail and got two relatively quick hitches back up to MacDonald Pass around 11. Back on trail we met up with Mac, Appa, and JPEG and hiked with those guys for most of the day. At some point we were in Ted Kaczynski’s old neighborhood(the Unabomber). The FBI seized his whole cabin though so there was no sign of the weirdo. This section is pretty dry and very smoky due to the wildfire up ahead. We took an alternate to the west of the trail that had a better water situation. Once back on the official trail we made it to a water source and shortly after that found a place in the pines to camp.

This is an old train tresses and looked extremely apocalyptic 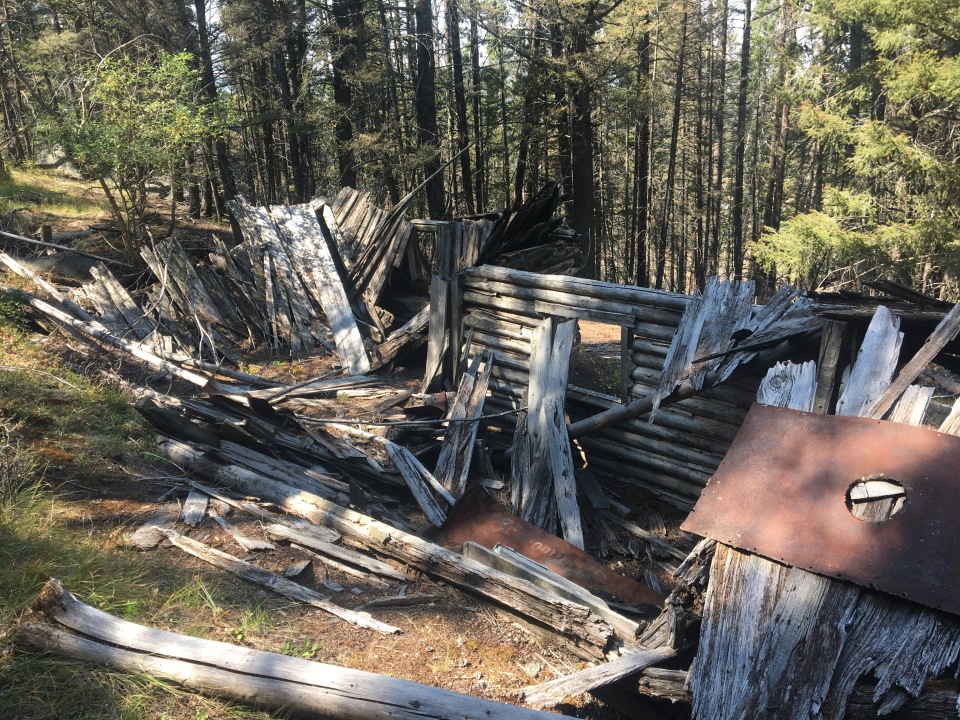 possibly what the unabomber’s cabin would have looked like, as this was in the area where the lunatic lived 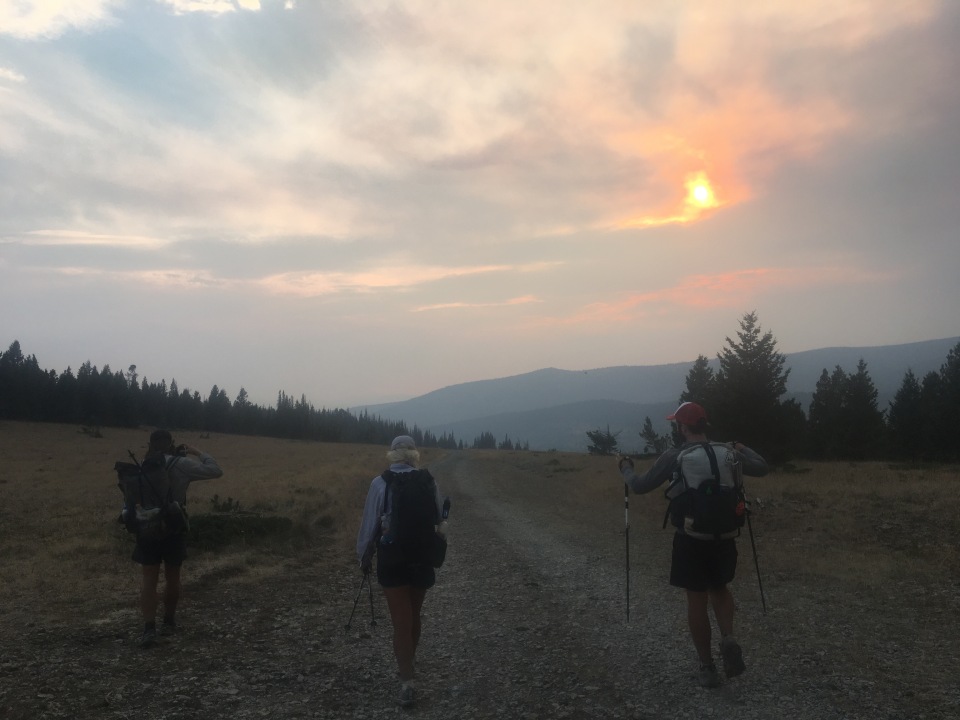 Today was a hot, humid, hazy, and smoky day to walk to Canada. The water sources were very limited but luckily we came across caches twice. There’s some awesome person in the area that stocks caches at both Stemple Pass and Flesher Pass and because of them I didn’t dry up today. Due to the weather and a bunch of short steep climbs it was a tough day to conserve water. We hiked with Mac and Appa this morning until those guys took a different route towards town. As of right now there’s a big wildfire up ahead causing a trail closure and a reroute so hikers are taking a few different routes to get down into Lincoln. Queen B and I got to Flesher Pass tonight and instead of going to Rodgers Pass(where the trail is closed), our plan is to walk the road from here to connect with the reroute a little earlier. This plan will eliminate some of the highway walking around the closure that will be inevitable. Wildfires and trail closures are a pain in the ass but also part of the hike and not really all that big of a deal for us compared to the people who are living up here and who are actually affected by the fires. Anyway after a long hot day we found a spot to camp about a quarter mile from the road and we’ll be walking that for awhile tomorrow before getting into Lincoln.

lots of hikers along this ridge, I felt like I was in the desert in on the PCT 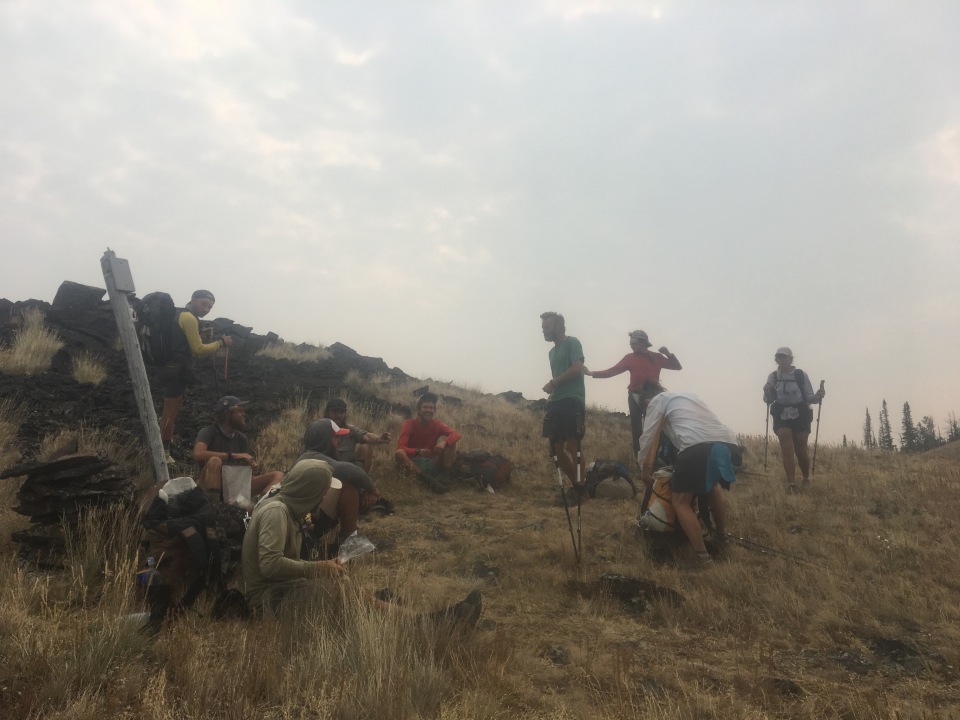 a large group of hiking enthusiasts 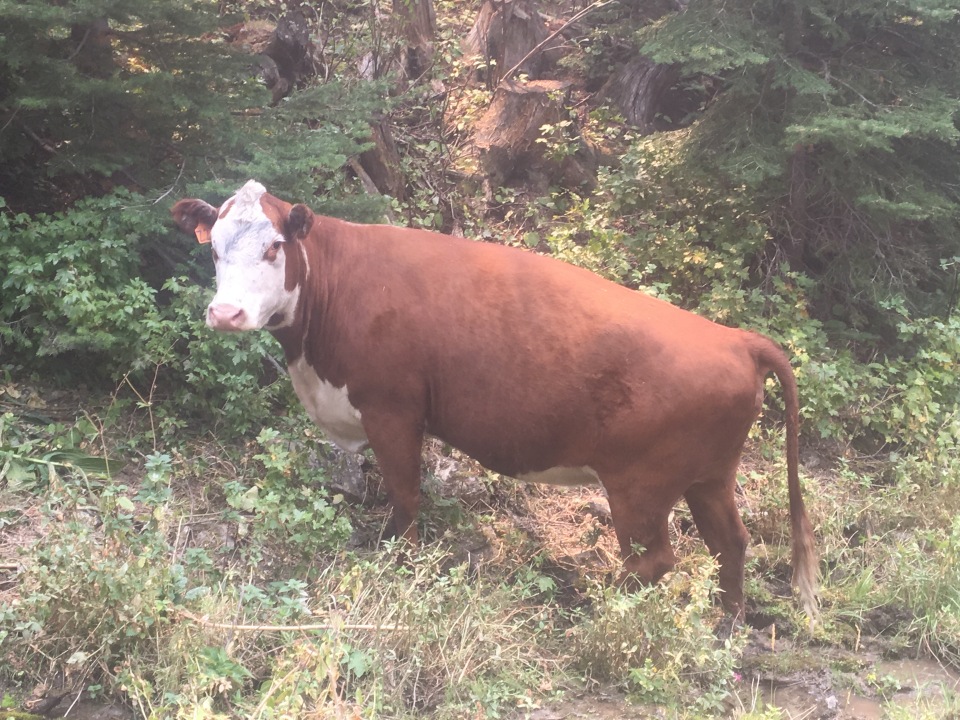 moo!!! I drank a bunch of this gigantic cow’s water 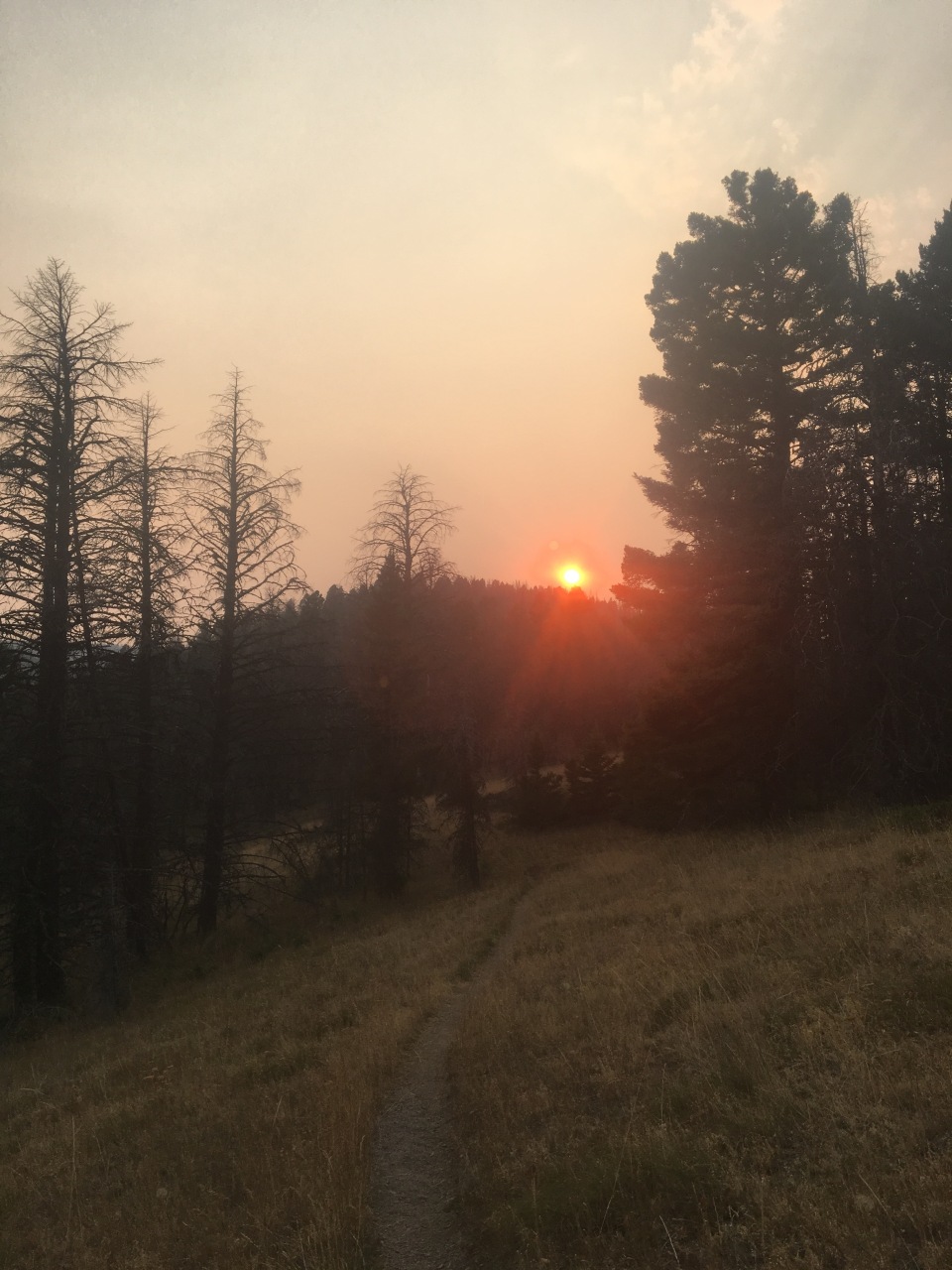 Holy smokes!! It’s been a super smoky morning as we walked down from Flesher Pass and even smokier here in Lincoln. We started walking down a trail that Queen B invented, following power lines steeply down to a road after a mile or two. Once we got to the road we walked along it for about 6 miles, took a left and walked another 6 miles to the point where the reroute cuts north. At this point we hitched into Lincoln and we’ll start back here tomorrow morning. We’ve got a big section coming up going through the Bob Marshal Wilderness so we’ll take care of a few chores in town this afternoon and hit the trail hard tomorrow.

The sun looks crazy in the smoke, don’t even need eclipse glasses 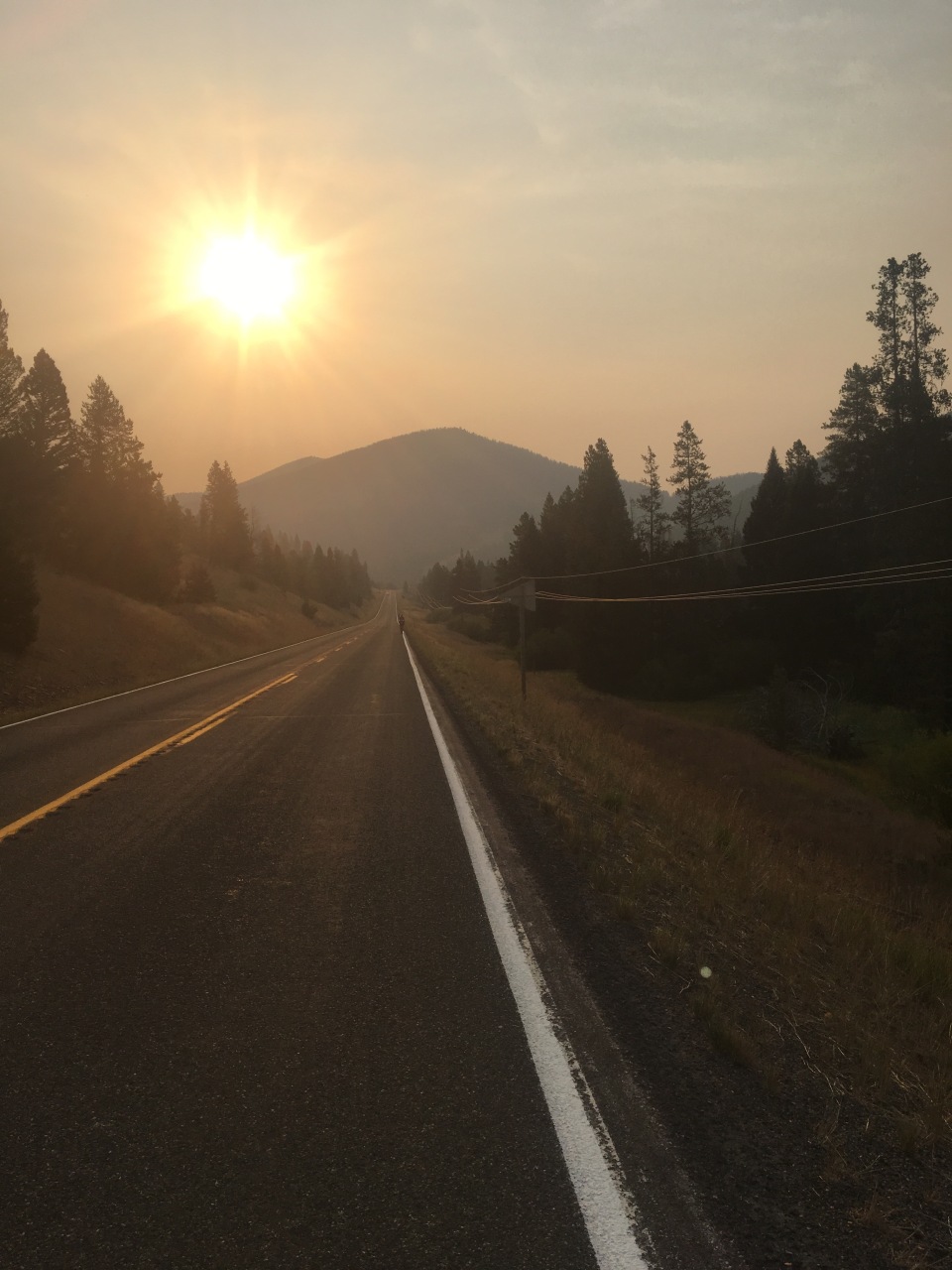