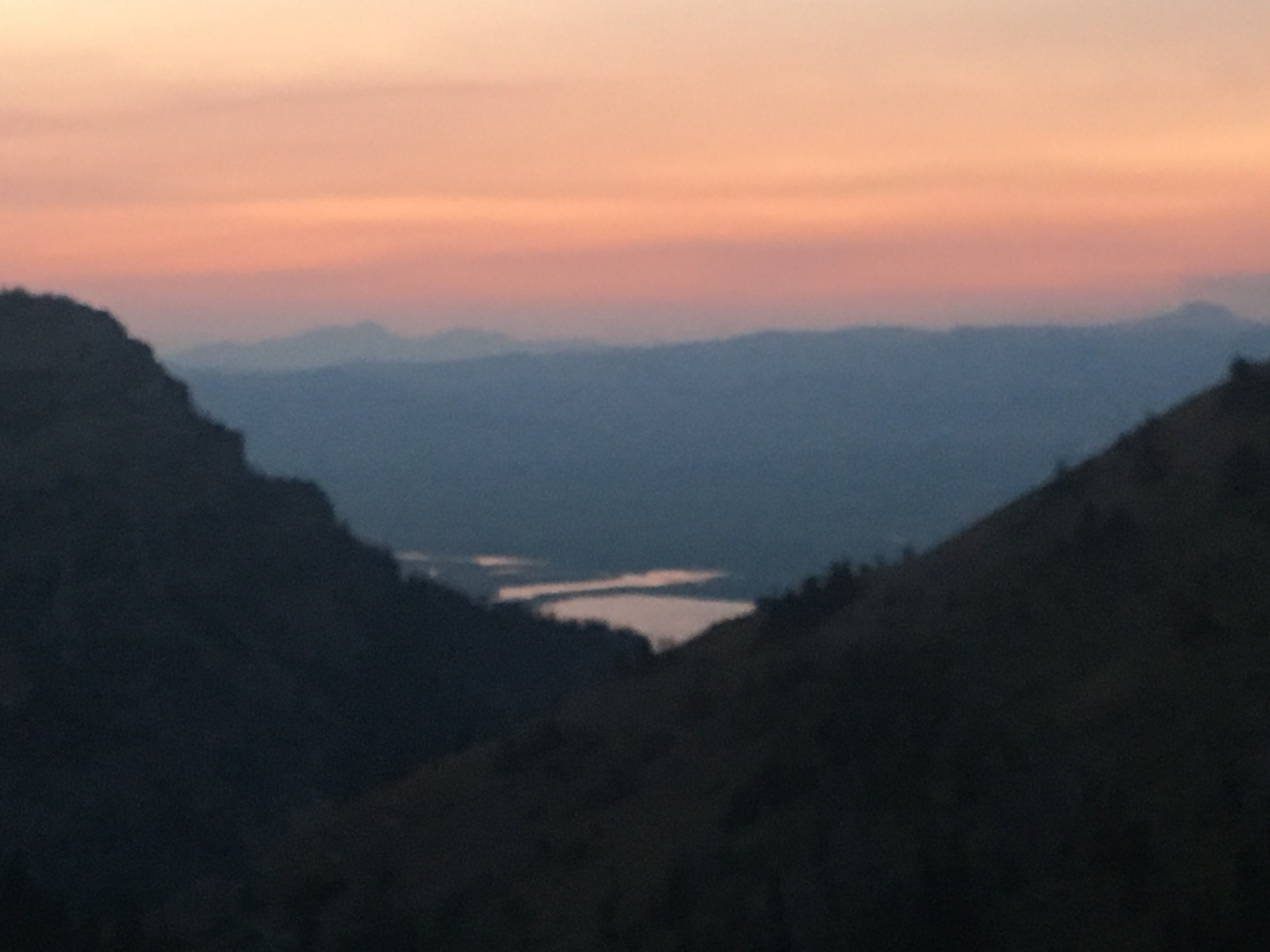 Yesterday after eating burritos at Mack’s Inn in Island Park we walked a couple miles on the highway before getting to the Sawtell Resort campground. Included with a cheap tent site was full use of their hot tub, pool and showers. Along with a couple southbounders, Magpie and Schweppes, and a pair of section hikers, Margo and Jasper, we soaked in the hot tub for a couple hours. I really hope they change the water in that thing after they let 6 stinky hikers stew in there for hours. After our soak I got a plate of Lo Mein at the Chinese food place across the street and called it a night. This morning we ate breakfast sandwiches then ice cream sandwiches at the little grocery store and began walking. The first ten miles were a dirt road walk that climbed up towards Sawtell Peak. Then we followed what wasn’t much of a trail at all for about 5 miles, more of a bushwhack, through tons of wildflowers next to a creek. At some point during this bushwhack we crossed into Montana for the first time and then walked along the Idaho/Montana border for the rest of the day. Once we got away from the creek the trail climbed through a forest and up on a ridge. We walked into an awesome sunset along the ridge but there was no place to camp up there. Luckily the moon was full and we are so far west that it stays light out until 9:30. Eventually we dropped down but the only decent spot to camp was right on trail. Oh yeah I saw a coyote puppy or maybe even a wolf puppy this afternoon jumping around and stuff, it was at the top of a hill probably about 50 yards away and I really wish I got a better look at this little rascal. 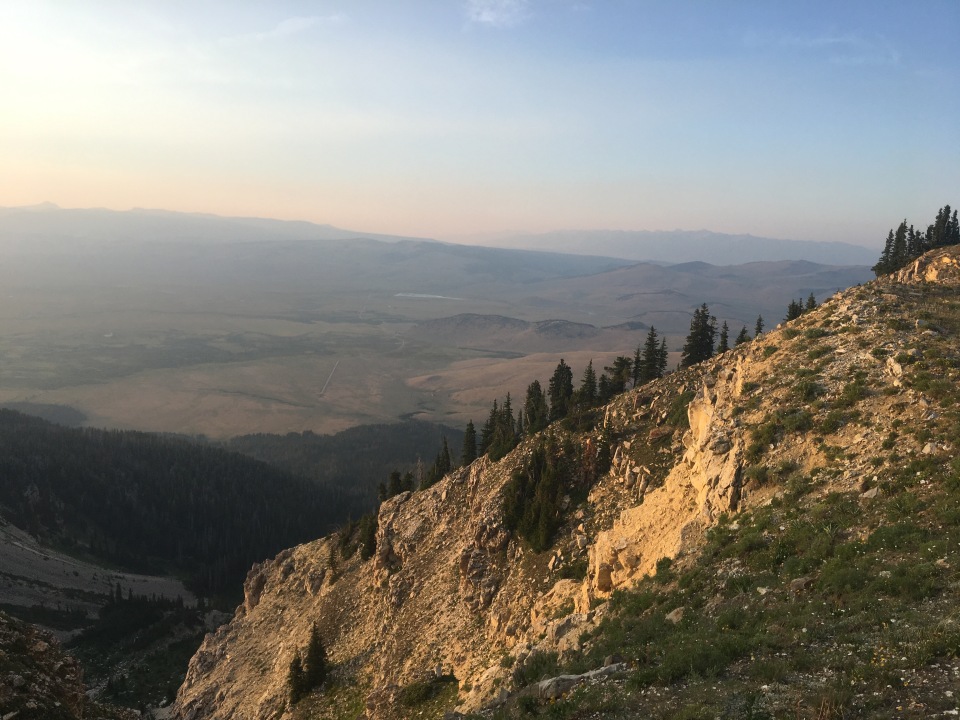 as you can tell from these pictures, I walked into an awesome sunset tonight

Today was rather uneventful. We got a later start than usual since we hiked late last night. The trail went up on a ridge this morning and then through forest for about a dozen miles before we stopped at Arduous Lake for lunch, not really fit for swimming though. After lunch we walked through a burn for hours and then had a nice climb up to a pass right before Rock Spring where we broke for supper this evening. I don’t want to say it was boring, I enjoyed myself and everything but it might have been the most uneventful day of the whole trail. We did see a couple of big sheep dogs barking at us shortly before we found a spot to camp but other than that didn’t see much wildlife and no other hikers. It has been a good section for birds of prey though, lots of cool hawks. 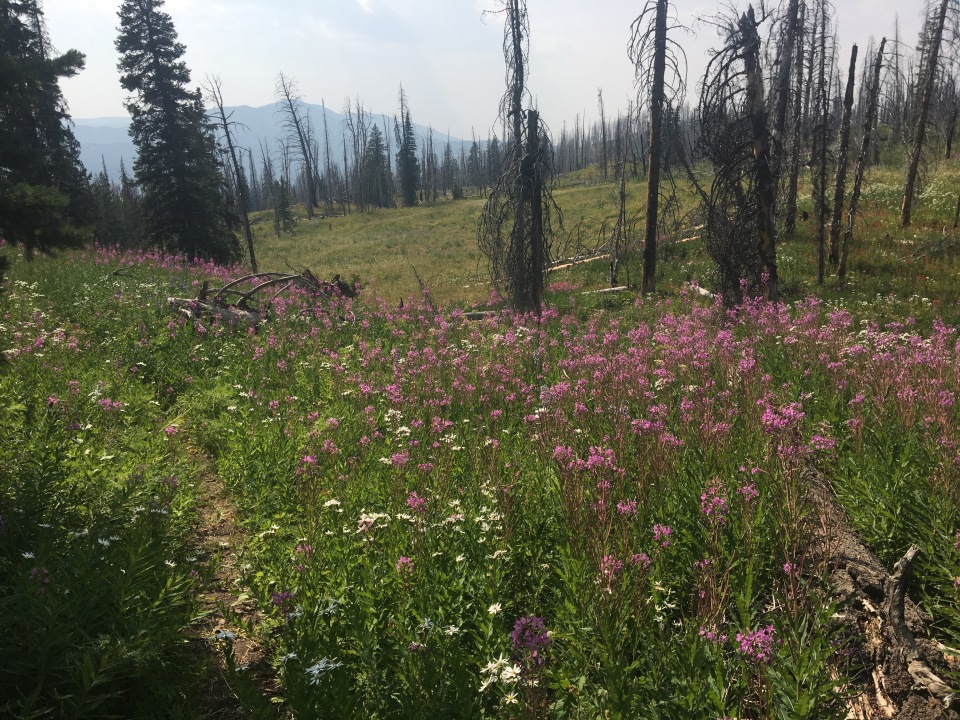 We pretty much just crushed the trail all morning and into the afternoon to get to Interstate 15 where we got a ride into the town of Lima, Montana. This is a tiny little town and the motel there was full of mostly southbound hikers who are filming a documentary or something. Jan’s Cafe across the street was renting out little cabins so that was cool, we got one of those for the night. In town we finally caught up to 3 hikers who we last saw in Chama, NM and have been just ahead of us for months; Moaglee, Little Spoon, and Kibbs. After we took care of some town chores a bunch of us went out for supper at Peat Cafe where you can cook your own steaks. The place was cool and the concept of cooking your own steak must work out especially nice for them since they don’t have to pay a cook plus nobody sends their food back. We ate our steaks then resupplied for the next section at a gas station. I’ve been eating all crap on trail and that’s what gas stations specialize in. 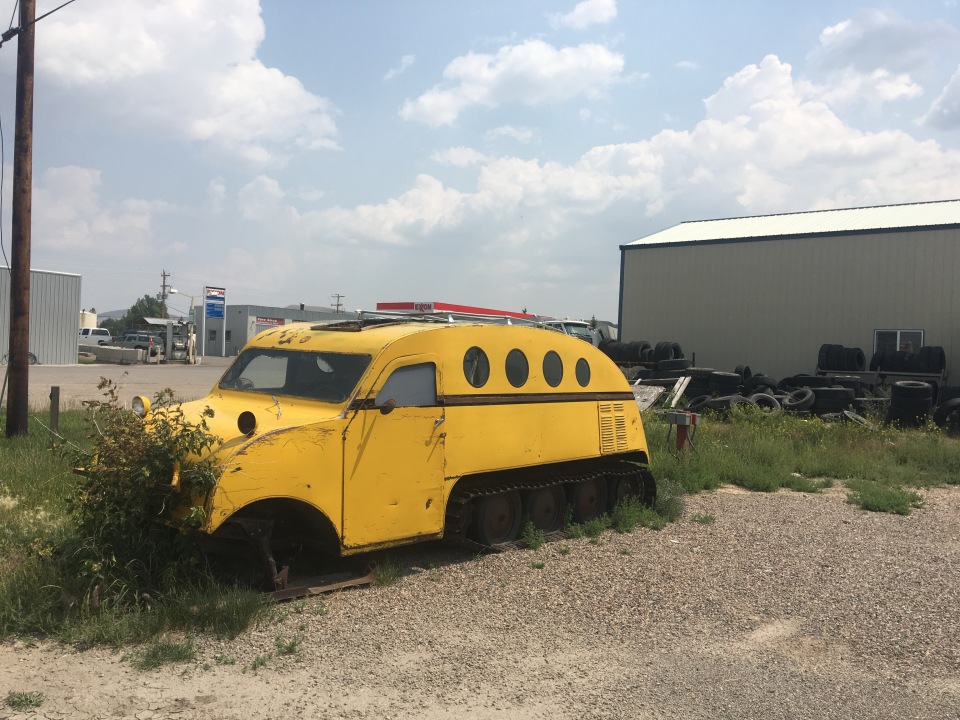 This morning we had breakfast with Moist at Jan’s Cafe next to the cabins. He had been hiking with Mac and Appa when we last saw him down in the boot heel and got off trail in Winter Park but was about to rejoin his buddies. Mac and Appa walked in the restaurant and were shocked to see that their buddy had come back from the proverbial dead. B and I put a beating on breakfast then walked out to the interstate and put our thumbs out. We got the rare big rig to pull over and drive us the 20 miles back to the trail around 12 o’clock. Once back on trail we walked on dirt roads through desert for a couple hours until the trail climbed up on an open ridge. There were electrical storms all over the place so we took an alternate that kept us low for a few more miles and hopefully the T and L would subside. This worked out for us for awhile since we didn’t get struck by lightning but on the bushwhack up to the ridge I had to walk through all kinds of nettles that made my legs itch like whoa. The ridge was a roller coaster of steep ups and downs for about a dozen miles before eventually dropping down into some pines where we could camp. I ran into 3 southbounders today including ‘One of Us’ who I first met in Northern California on the PCT in ’15. 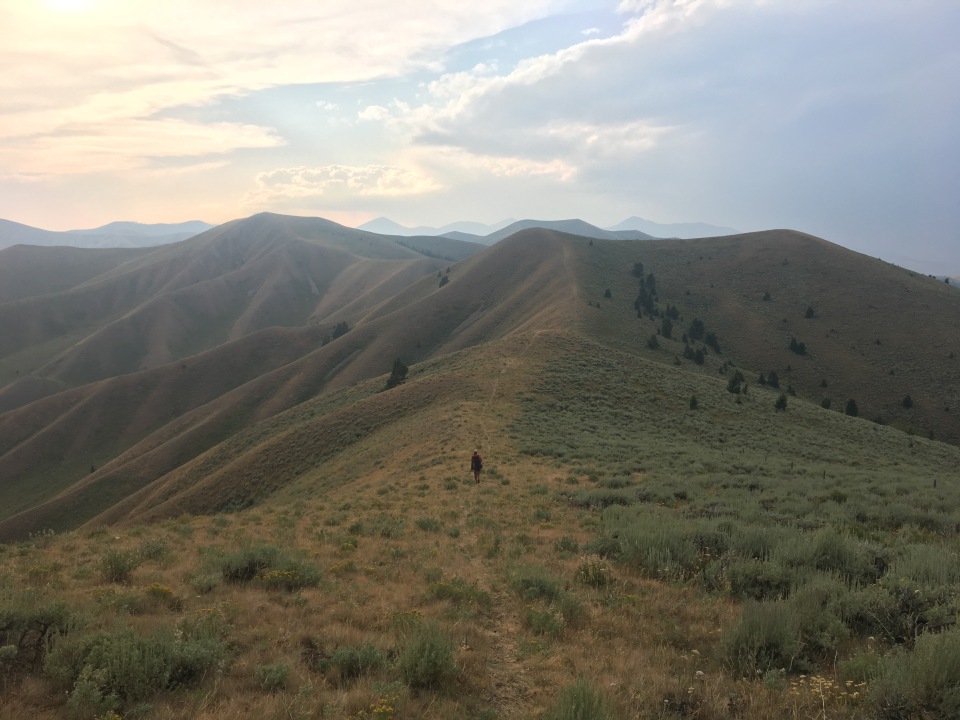 On the left is Idaho, on the right Montana. Or the other way around 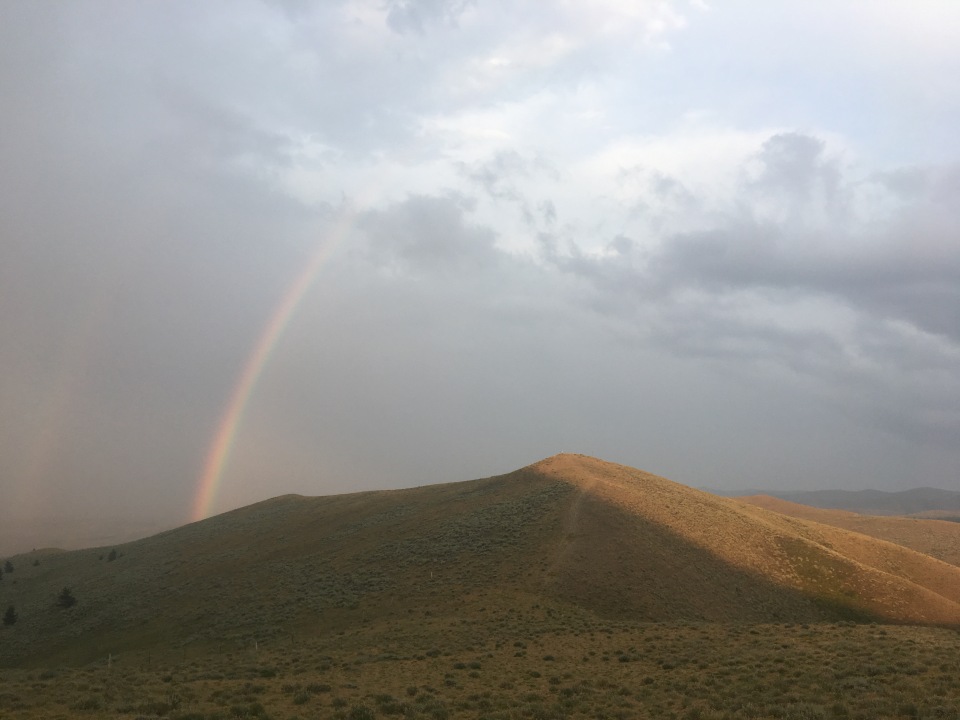 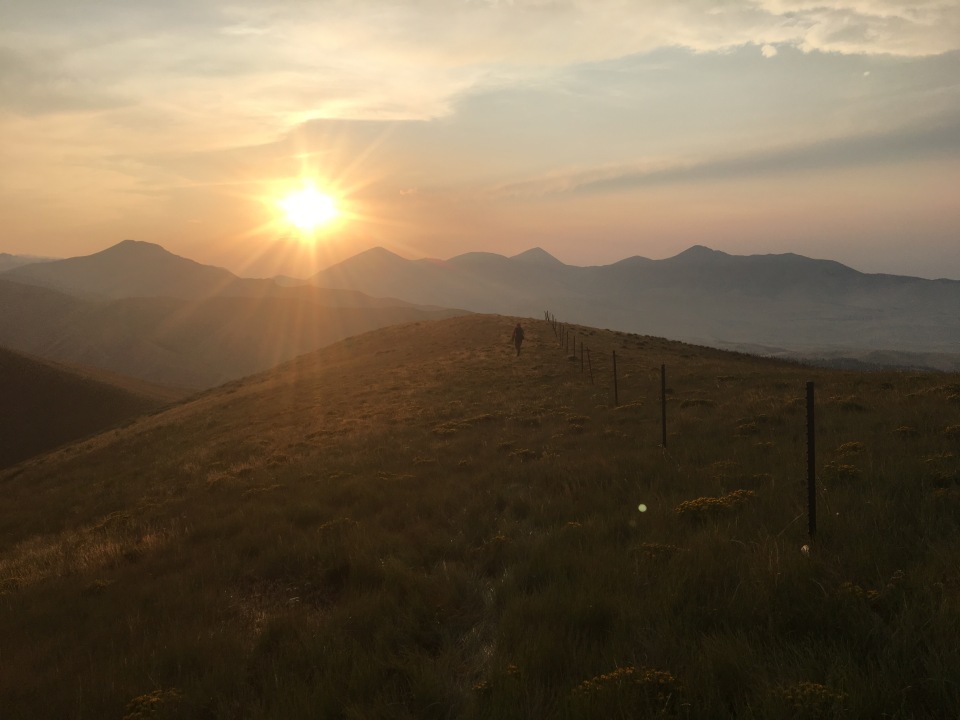 For some unexplainable reason I tossed and turned all night and barely got any sleep. Insomnia has been, without a doubt, the most frustrating and difficult obstacle I’ve had to face on this trail so far. I ended up getting a couple hours of sleep and didn’t start hiking until close to 9am. My first half dozen miles were miserable, I was exhausted and dragging ass through tall grass and constantly stepping on fresh cow pies. The trail then steeply climbed a few thousand feet and Queen B and I must have both caught the eye of the tiger or some other rush of adrenaline because we both bolted up that pass. The rest of the day my body felt pretty strong and thankfully the trail wasn’t too fierce. A good amount of dirt road and some long slow climbs and descents with wide open views. After seeing absolutely nobody all day we came across a group of 8 sobo’s all within a quarter mile of each other(rare to see that many people hiking together). Among them was Salt Lick who I met in ’15 in the California desert, it’s got to the point where every time I see a hiker coming my way I wonder if we’ve already met. QB and I walked a few more miles into the sunset and down towards Deadman Lake where we set up for the night just out of reach of a thunderstorm in the distance. 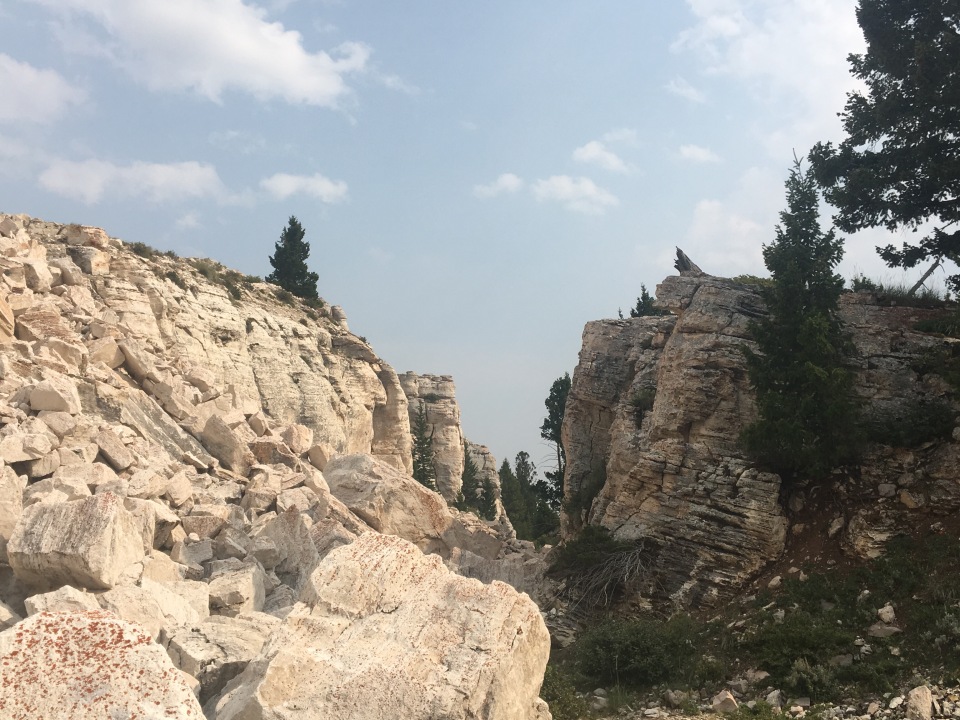 Just when I thought this trail couldn’t get any weirder, we come up on all these huge white cliffs 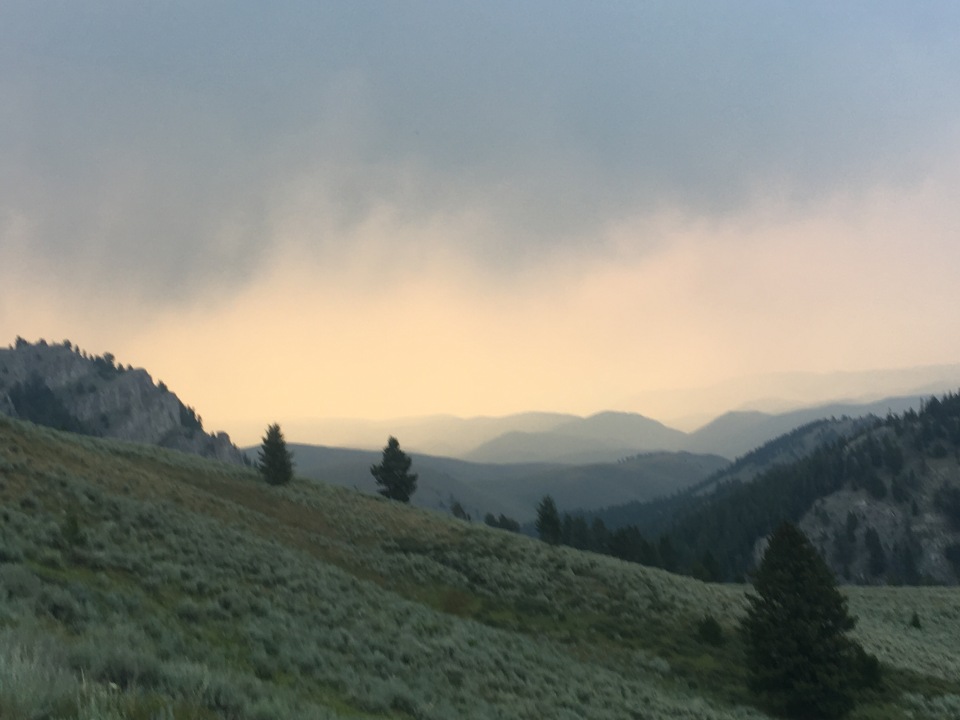 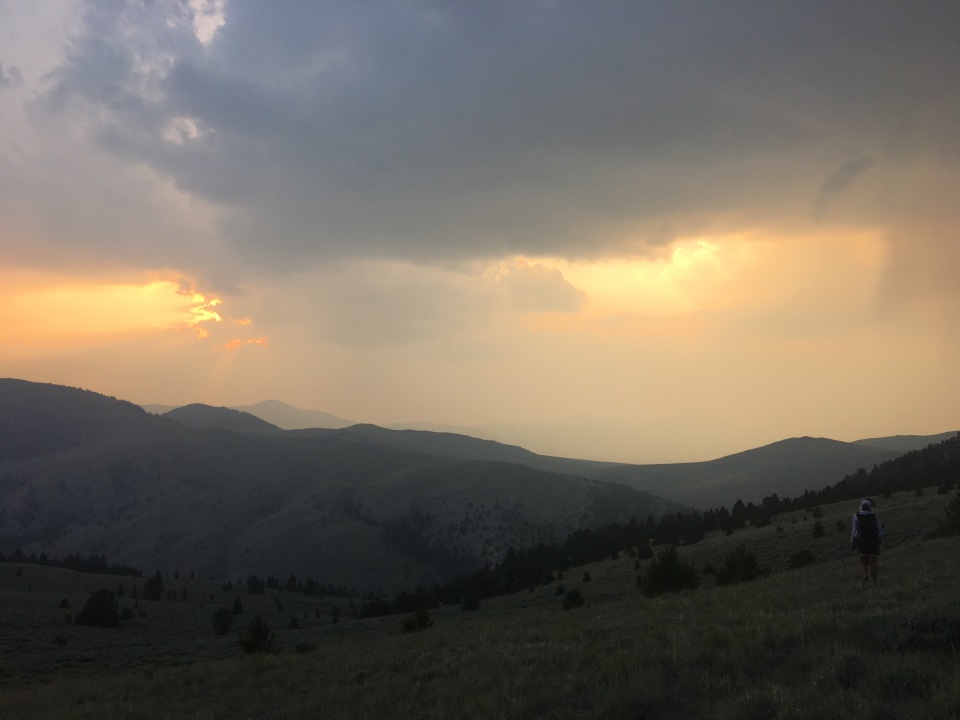 I thought I would be pretty sluggish today after another lousy night’s sleep but I got my mojo back right after climbing the steep trail to a pass from Deadman Lake. We then descended and followed the trail onto rolling plains for awhile. This afternoon thunderstorms moved in right before we had to climb up on to an exposed ridge so we found some shelter in a few pines and waited about a half hour. Perfect timing. The clouds moved through and the 3 or 4 miles up on the ridge went smoothly. We saw Moaglee and Little Spoon doing the same thing, chilling out and waiting for the storm to pass. Up on the ridge we had some pretty sweet views and saw a herd of pronghorn bolting past us(I thought these were the same thing as antelope but I guess there’s a difference). We dropped down from the ridge and everything was nice and peaceful for awhile and then out of nowhere we had this super cold rain for a couple hours. Whatever. It cleared up and we found a nice spot to camp in some pines by Morrison Lake. 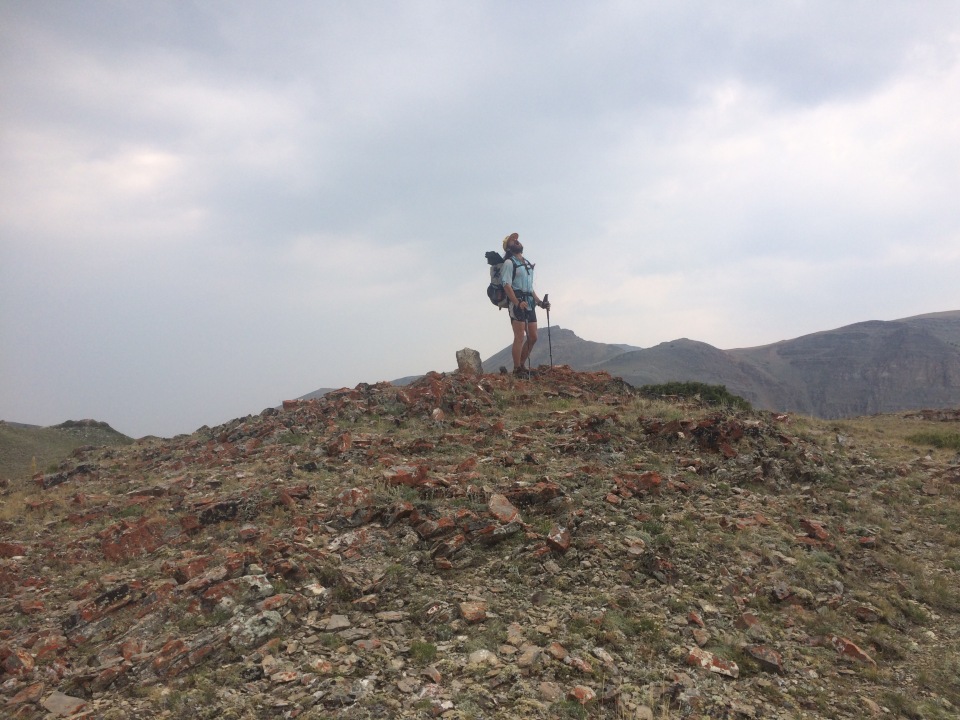 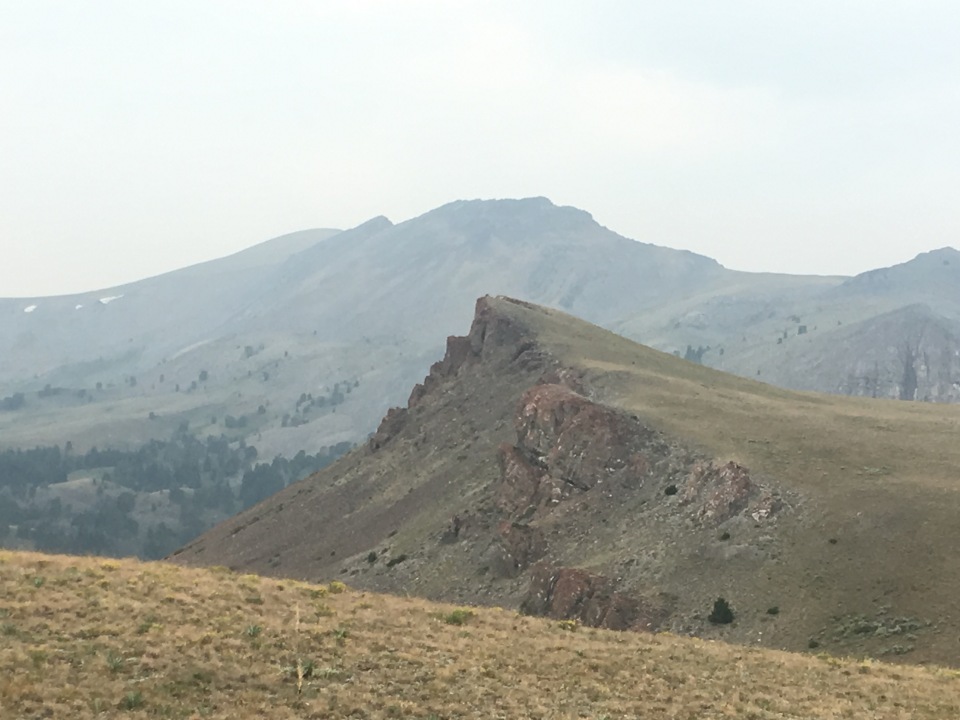 The sky hazy from distant wildfires

Finally some rest. Slept like a rock last night. This morning we got up and just cruised all day. The trail was mostly rolling dirt road up high on an open ridge but there were some good climbs in there. We saw a little red fox jumping around in the grass either playing or looking for mice and stuff. When it saw us it took off into the woods. Too bad because the last time I saw a fox it came right up close to play, probably expecting a frisbee toss or something. Once the trail turned off the dirt road onto actual trail and started up towards Elk Mountain I saw what I thought was a black dog. It wasn’t, it was a little black bear cub following another cub but this one was cinnamon colored and both were following a cinnamon colored sow. At first I thought it was a black bear cub hanging out with his grizzly bear friends, but I’m pretty sure this doesn’t happen. After this cool little bear sighting we got up over 10,000 feet on Elk Mountain and then just cruised downhill about 12 miles to Bannock Pass. Sam, the owner of the 4 room Leadore Inn, drove up to the pass and brought us down into Leadore(population 105) for the night. To get here from Bannock Pass we drove down gravel rt 29, the last unpaved highway in the country, supposedly. In town we grabbed some burgers at the town restaurant and then hung out in yard at the inn with Moaglee, Little Spoon, Kibbs and Lux. To see more pictures of this trip feel free to follow my insta @endlesspsummer 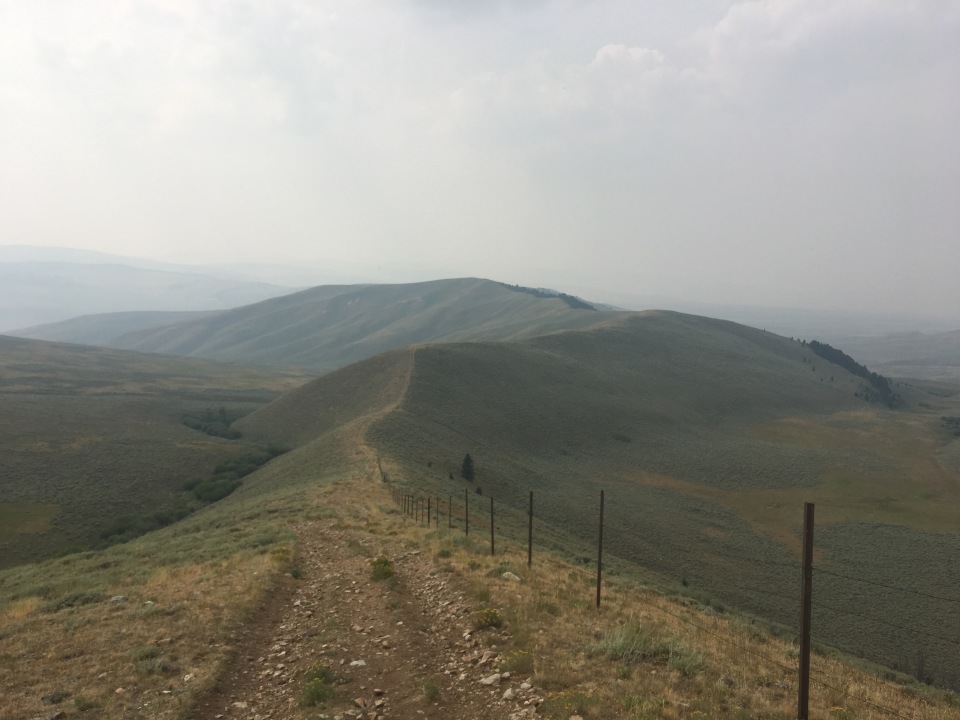 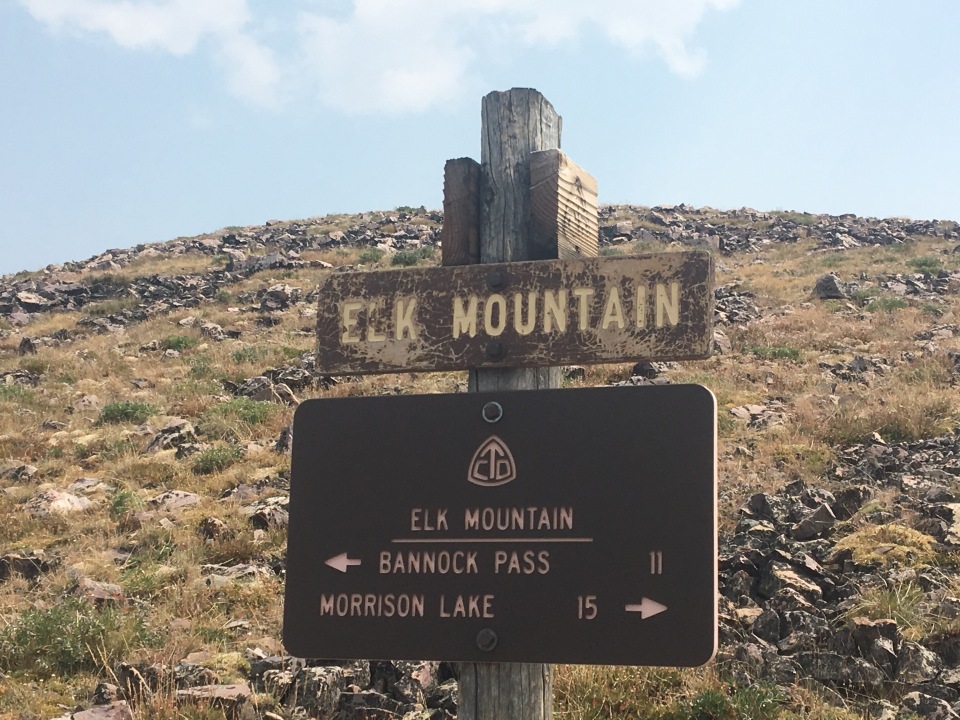