Enjoying some much needed sleep this morning, I didn’t get out of bed until close to 9:30. Just in time to put a good beating on the Days Inn continental breakfast. Then I returned to the room to continue sleeping until checkout. Queen B and I spent the bulk of the afternoon resupplying and relaxing inside an air conditioned McDonald’s with free wifi and a steady flow of double cheeseburgers and vanilla ice cream cones. Even though we sat out the heat of the day the temperature was still close to 90 when we got back on trail around 5. The trail cuts through the city of Rawlins and then follows rt 287 for a few miles before joining a dirt road out in the open range paralel to the highway. We ran into Buddy Backpacker and his parents Andrea and Dion who were hiking south for a section. I saw these 3 briefly last year in Colorado and we met Dion again way down in the boot heel of New Mexico a few months ago. We walked on, enjoying a nice sunset and found a place to camp as it was getting dark. 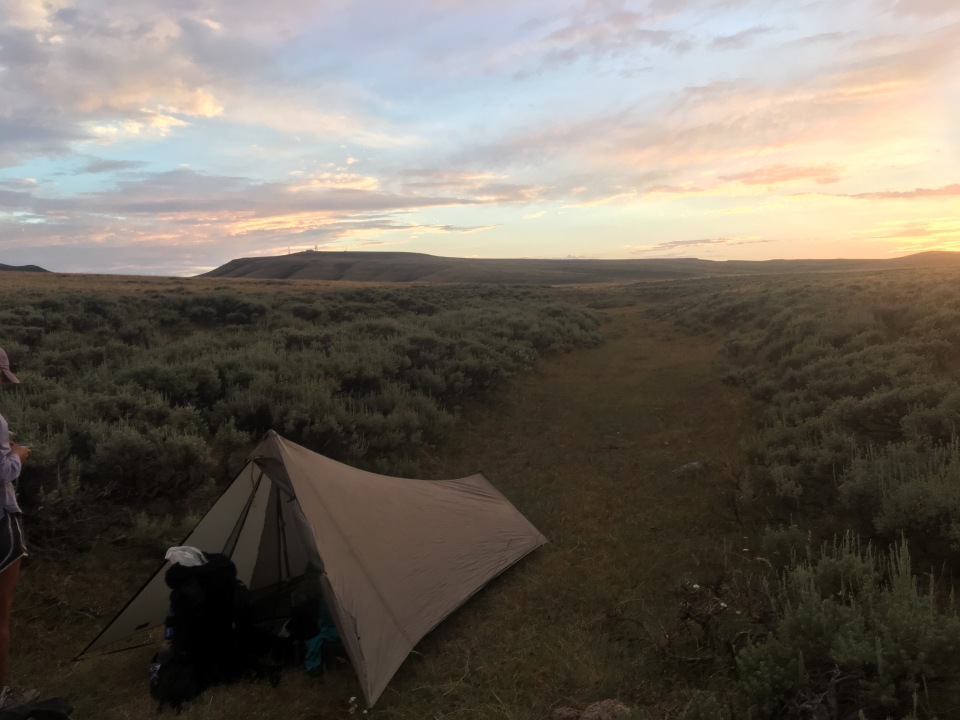 still living inside an REI commercial

We knocked it out of the park today! The trail was flat, hot, dry and treeless all day. It was ideal for big miles. Early on we decided we would aim for 40 and were relentless in our pursuit. Honestly though it wasn’t all that difficult. The trail through the Great Basin is made for cruising. You have to go long distances in between water sources and since there’s no trees there’s no place to take breaks in the shade. Might as well just keep walking. There wasn’t any other people out here but we did see some wild horses and about a hundred antelope. I’m not sure if the horses are actually wild but I didn’t see any fences or cowboys and the hoof prints didn’t look like they were shoed (plus my friend Speed said that BLM has something like 10,000 horses). We walked through the sunset and as it began to get dark we hit 40 miles and called it a day.

this all day long!

QB going all Clark Griswold across the desert

there’s antelope in this picture, there so fast and skittish it’s hard to get a good shot of them 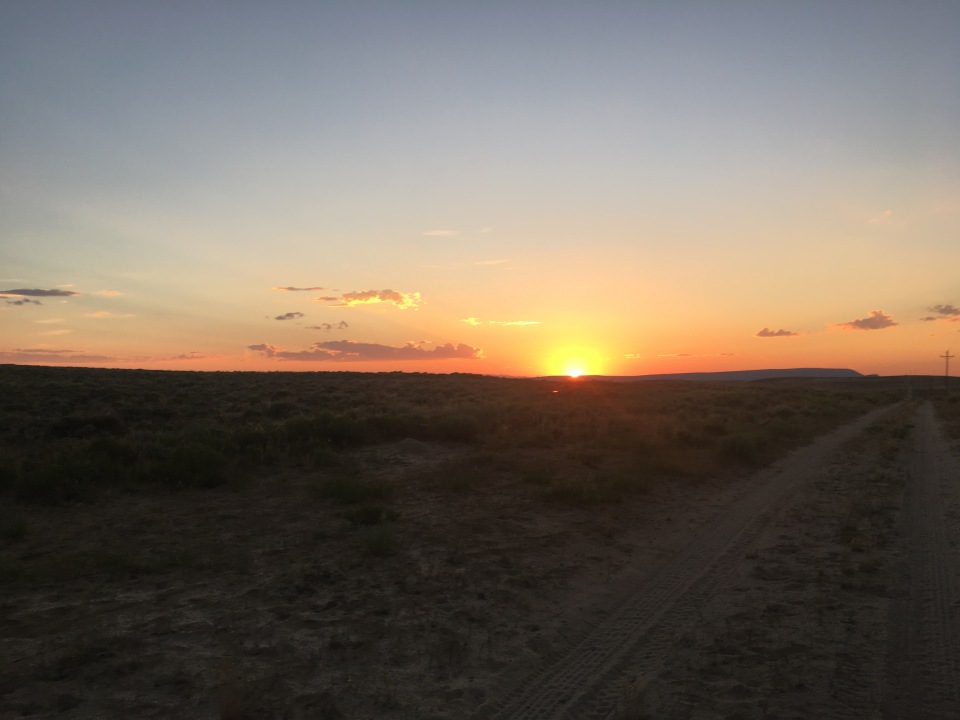 Walking into a beautiful Wyoming Sunset

There really is no sense in taking our time through the Basin so we tried again for 40 today. The skies were mostly overcast all day and this provided some decent shade and was good for hiking. Yesterday the heat was borderline oppressive but today it was much cooler and rather comfortable. I saw more wild horses again and tons of antelope(those things are fast!). Around 30 miles in we came across an awesome water cache stocked by Hawkeye and stopped for supper. I was feeling really good after we ate and definitely had ten more in me but Mother Nature had other plans. About 20 minutes later, the clouds that were providing shade and keeping us cool all day suddenly got really dark and suddenly we were enveloped on all sides by thunderheads. There was lightning in every direction and it started to pour. The only move was to quickly find a lower lying area and quickly set up camp. This wasn’t a passing storm, there was heavy rain with thunder and lightning for about an hour, and then there was an incredible sunset and a faint rainbow visible from my tent. 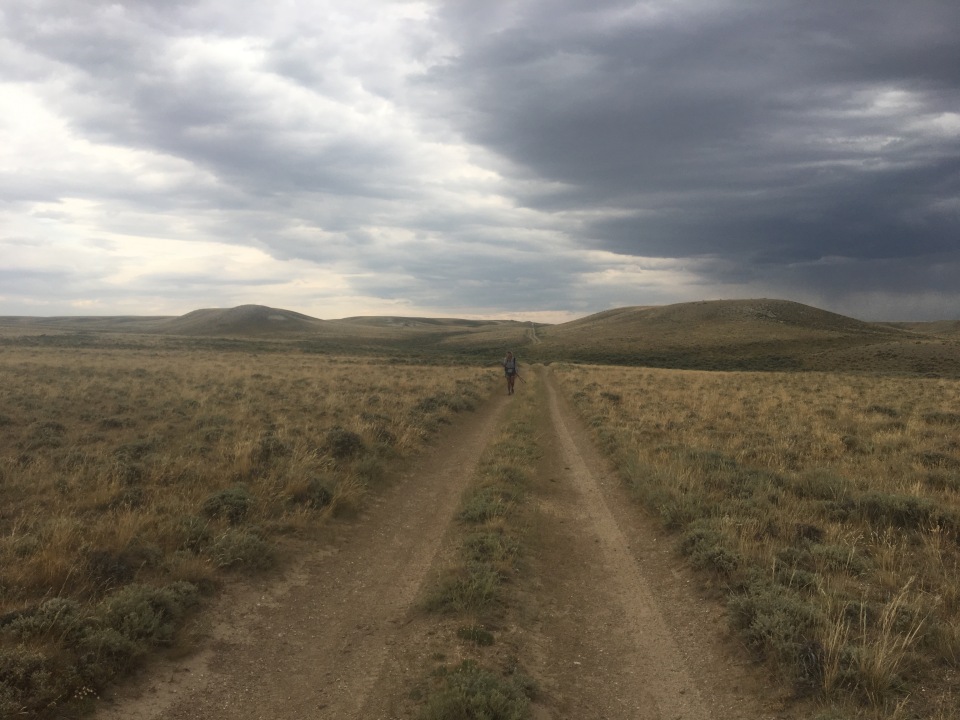 it looks like this weather is starting to change on us

Today might as well have been two separate days, at least it felt that way. It was mostly blue skies, with a few clouds, a slight breeze and hot until about 6:30. We even came across the Sweetwater River and  jumped right in. So nice to cool off after a few hot days in the desert. We stopped to eat dinner around 6 and had some big time thunderheads looming directly in our path. There was another crazy electric storm just a few miles ahead of us and we were the highest points on a flat plain. Continuing forward was not an option. We could have either retreated backwards and found some lower ground to camp on but instead we audibled. Looking at the map we decided to cut West down to a river and then stick between a river and a road that went all the way to South Pass City(this isn’t really a city but more of a historical area along the lines of Plimoth Plantation or Sturbridge Village). We had resupply boxes waiting for us in SPC and this was our next destination. Taking this route we figured we could go along the edge of the T-Storm and avoid trouble. It was crazy! For the most part we stayed out of harm’s way but were right on the edge of a couple different storm systems and more than once had to stop and hunker down for a few minutes. We had to cross a river, crawl under a few fences, and were cutting across what was probably private property but it seemed to be the safest and only option. After a couple hours we were out ahead of the danger and were not only happy that we didn’t get struck by lightning but were also able to enjoy some incredible skies for the last hour into town. There was a remarkable double rainbow as well as bright orange, yellow, pink, purple and dark gray sky in all directions. This was a truly incredible experience, I’ve never seen such an intense sunset. Wyoming has the best sunsets! It was dark by the time we got into SPC and found a spot to set up. I’m relieved to be able to sleep in tomorrow since the store where I’m picking my package up doesn’t open until 9.

Walking towards Wind River Range in the distance

swam here in the Sweetwater River

the sky got so crazy!

Getting through the T-Storm safe and sound