We took the last two days to rent a car and drive out to the middle of nowhere, UT to cache food and water for the future. Last night we camped just outside of Moab within Sand Flats Recreation Area. This place is a hub for Jeep owners, mountain bikers, and 4WD enthusiasts.

This morning we drove down into town to tie up some loose ends before we continued on the Hayduke. First we had to go to the post office to pick up our ‘pack rafts.’ Actually the pair of Intex Explorer 200’s we’ll be paddling are more like a glorified pool toy than a legitimate pack raft. Then we met up with our friend Quiet Earp who dug up some life jackets for us and gave us a bunch of tips about the river. We ate a couple meals, returned the rental car, and got a ride from Kim at Enterprise to the boat launch on the river.

While we were blowing up our pool toys and staring down the mighty Colorado, I was definitely having second thoughts. The wind was whipping, the water was choppy, and it seemed to be going backwards up river instead of flowing gently downstream like I was hoping for. Plus I don’t know how to paddle one of these things! You’re supposed to sit backwards and paddle it like a rowboat. I have zero rowboat experience(besides the 4 times I watched ‘The Notebook) and the last time I was on a boat like this was probably when I was 10 years old on Lake Ossipee. QB had a little bit more confidence, she was a Girl Scout and a camp counselor. What’s the worst that could happen? I got in and for awhile probably looked like a baby deer on ice but it didn’t take me too long before I somewhat got the hang of it. Luckily the wind settled down and there was a bit of a current that pulled us along while we figured out the paddles. And then after only 15 minutes I noticed my boat seemed to be leaking!

We pulled over and gave it a good inspection and found a few tiny pinholes on the topside of the raft. What the heck dude! I can’t imagine I did the damage myself but I guess I might have, I really think it was a defective boat and came out of the package like this. QB patched it and reinforced the patches with duck tape and that seemed to hold up for about an hour. I was paddling along just fine then suddenly I could hear the leak hissing and bee lined for the shore. The tape seemed to get wet and that pulled the patch off, so this time we put on just the patch and hoped for the best(our last patch already!). I guess that’s what you’re supposed to do because that seemed to do the trick. Fingers crossed!

Besides being a little nervous I would sink the rest of the day, paddling the river was awesome! With a gentle current we moved about 2 mph and had spectacular views of big red rock walls the rest of the day. From the boat we could see petroglyphs and mountain climbers on the walls. Because the road parallels the river for the first 15 miles of our trip people have access to the river and the canyon that it’s in. Around the time it was starting to get dark we got to an island across the river from a campground and set up for the night. 10 miles done, we just might make it in these things.

In total we have about a 67 mile stretch of river through Meander Canyon and then a similar amount of hiking to do before our next town, Hanksville.

Going into this trip my main concern was whether or not we’d be able to paddle these boats fast enough to make decent mileage. It hasn’t been simple but we’ve been moving along. As long as the weather doesn’t do anything too crazy and we don’t have any major hiccups I think we just might be alright. The patch was still on the holes and we still had two boats floating. QB insisted on switching boats this morning so she could keep a close eye on her patch job(I think she thought I would sink that boat.)

When we first got on the river this morning there was no wind and with the gentle current we seemed to move relatively quickly. Here and there throughout the day we’d face a significant headwind and would have to paddle pretty hard to make any progress at all. Other times when the water was flat and the current was just pulling us along it was very enjoyable. It’s actually a really nice way to travel, sitting backwards in a rubber raft with my feet up and just drifting slowly and effortlessly through a beautiful red rock canyon(one time we even had a tailwind!).

Seven miles into the day we passed the Potash Salt Mine and the last hints of civilization. This thing was a bit of an eye sore. Shortly after the mine we reached a boat launch where a guiding company was dropping off a handful of canoes and paddlers. As luck would have it there was a privy at the launch. I have no qualms with digging a cat hole in the woods but this is wag bag territory so any chance at using a toilet is a luxury. 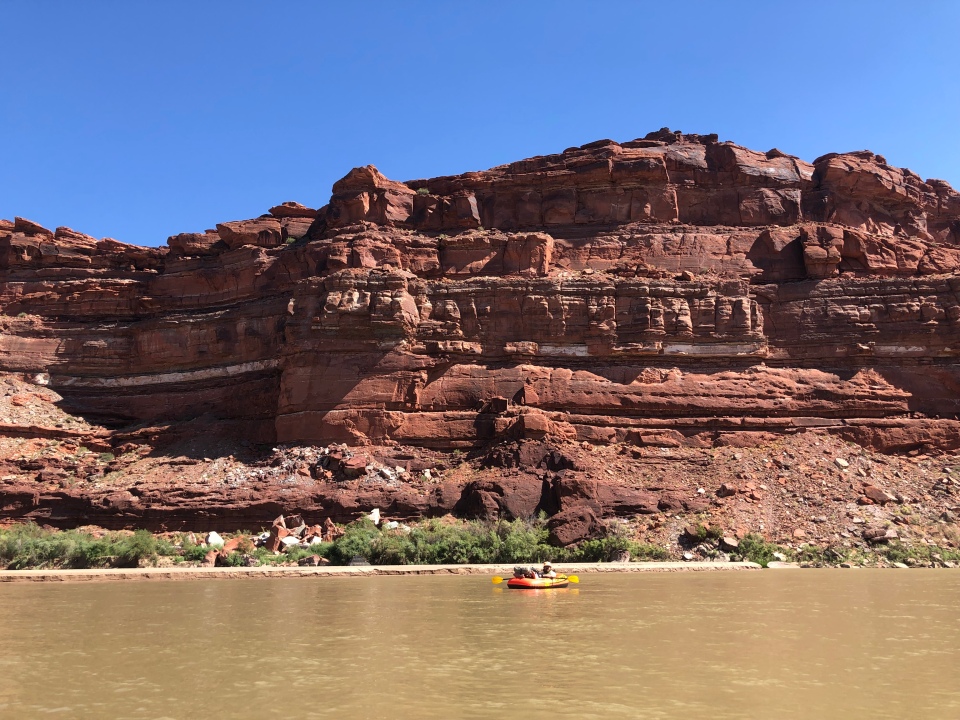 The rest of the day was really uneventful. We stopped a couple times to eat and swim. We saw just one other party canoeing and a few jet boats that motored up and down the river with a bunch of guests on board. For wildlife I saw 3 bighorn sheep, 2 beavers, and a ton of great blue herons. At first I thought maybe it was the same heron I just kept seeing over and over again but then I saw 5 of them all at the same time. Other than that we just paddled through a beautiful canyon on a beautiful day. Shortly after we crossed into Canyonlands NP we found a nice place to camp on a big beach at a bend in the river. 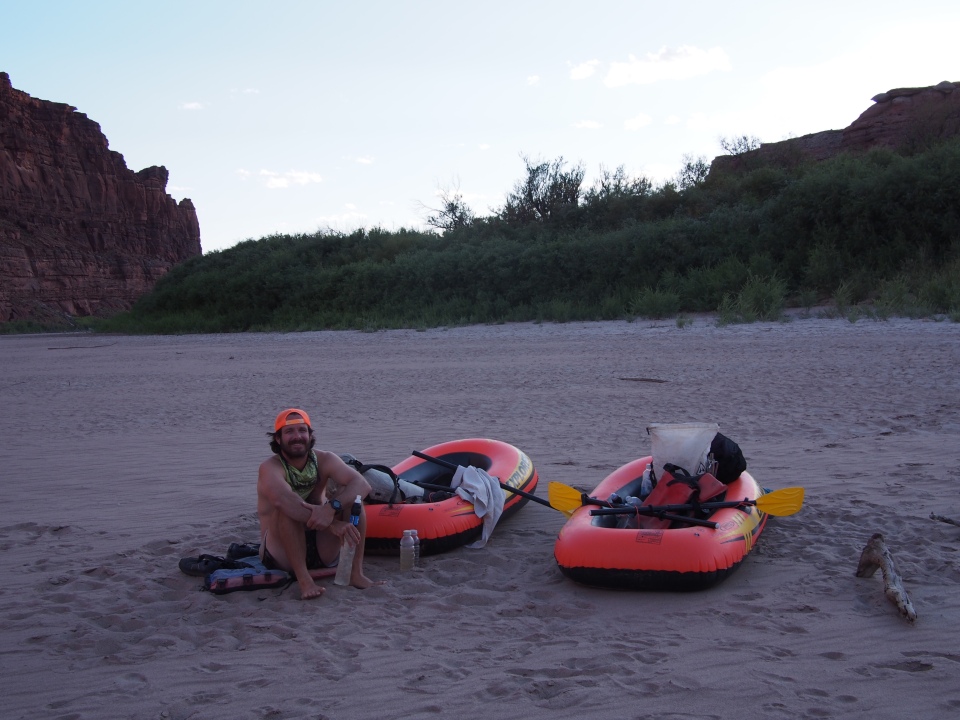 For the majority of today it was smooth sailing, so to speak. We got up and just cruised for the first 8 miles to Lathrop Canyon where there’s a top secret privy, take note if you want to save a wag bag. Beyond Lathrop the wind picked up just a little for the next couple hours until we took lunch. After lunch it got a bit crazy. At first we were just clipping right along and even caught a really nice current at one point and then some seriously fierce winds hit us right in the face. The river was pretty wide at this point and the wind was going directly against the current causing some major waves. We stuck to the side of the canyon and a couple times had to pull over altogether and wait for the wind to subside. I’m not sure exactly what these Intex Explorers can handle and I’m not sure I want to push them to the limit. During this whole event I managed to put a little hairline crack in part of my paddle that I had to slap some duct tape on. For the most part the wind hasn’t been unmanageable but for about an hour today it was straight up unpleasant.

Once the wind and water settled down we got back at it and got about 6 more miles down river to a campsite on a beach right the start of ‘The Loop.’ This is where the river serpentines through the canyon creating a couple of goosenecks. Check out image of the map below. 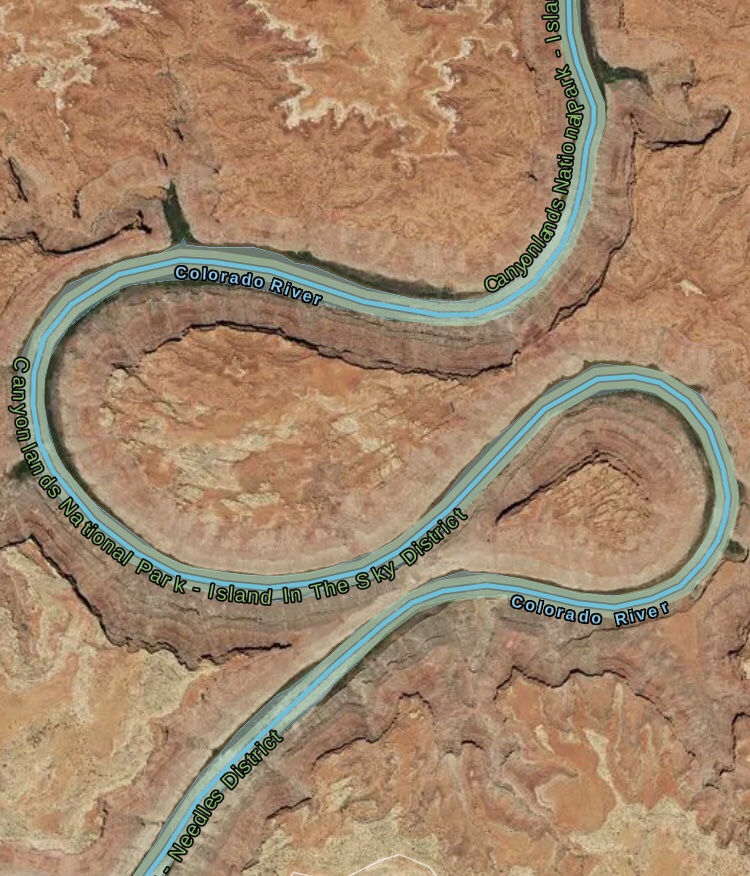 Wow! What a day! First of all absolutely no wind on the river which made the paddling super smooth and fast. Paddling through ‘The Loop’ was definitely my favorite part of the whole river section. There was a fast current and huge sandstone on both sides. Next we easily made it through ‘The Slide’ where the river narrowed due to an old rockslide and created a minor rapid, nothing these rubber rafts couldn’t handle. Shortly after that was the confluence of the Colorado and the Green River. In the last month we’ve walked by the glacier that is the headwaters of the Green River, hitchhiked through two towns named Green River(Wyoming and Utah) and now paddled by the spot where it ends and flows into the mighty Colorado. 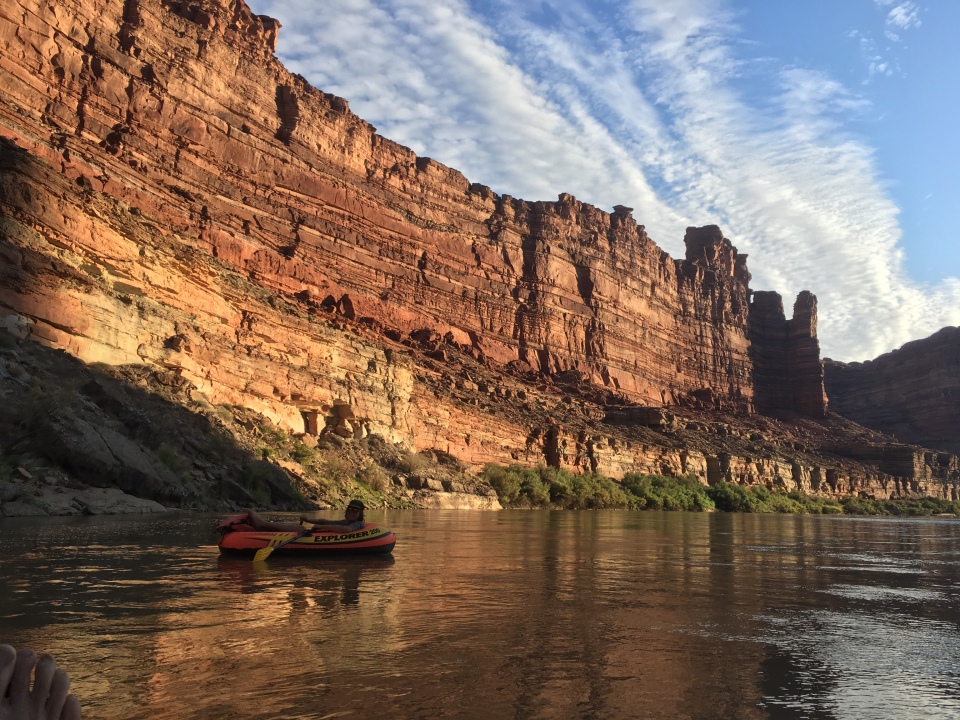 3 miles past the confluence we reached our destination, Spanish Bottom. This is a big flat area surrounded by thousand foot high canyon walls across from a beach at a bend in the river. Earlier in the day we met Keith who was guiding a rafting trip down the river and we asked if he’d be able to take some gear back to Moab for us. Of course he knew Quiet Earp and he’d be glad to return the life jackets to him, as well as our rafts, paddles, and cake pan.(Per order of our permit we were required to carry a fire ring, not that we ever have campfires, and the cake pan would meet that obligation. It also doubles as a bailing device if I was to take on water and triples as an onboard urinal). This was super lucky and couldn’t have worked out better if we planned it , Keith got to Spanish Bottom at the same time we did and saved us about 15 pounds each of gear to carry.

From here we have about a similar distance that we need to walk to get to our next town and resupply but because the rafting was so unique I had to split the blog and the day into two posts. I hope you’ll understand. To be continued…..

Posted on September 25, 2019 by endlesspsummer