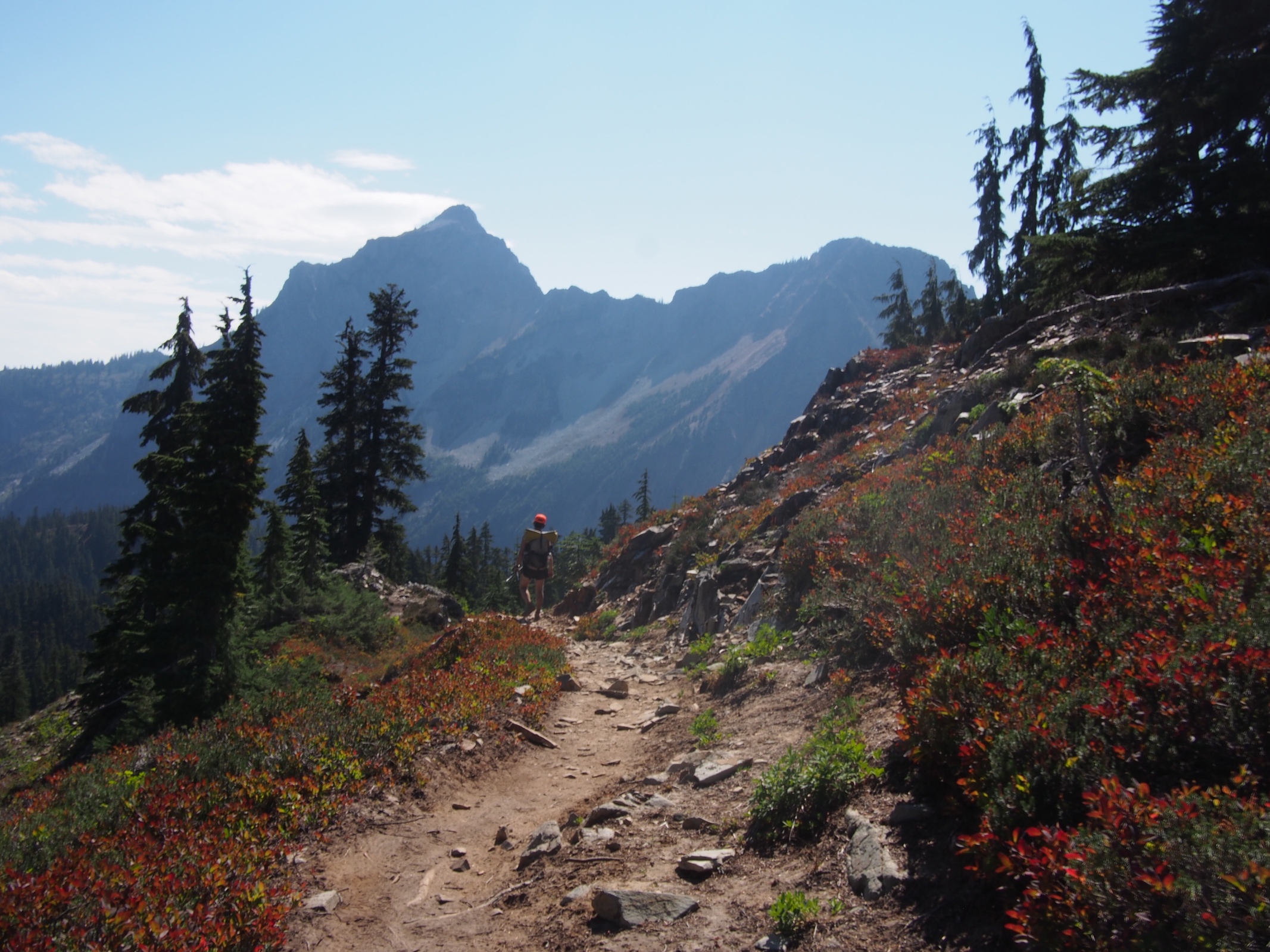 So the rest of yesterday, after I fired off the last blog post, went really smoothly. Our friend Malibu, who lives in Seattle, drove out to Snoqualmie Pass to have lunch. And he brought us some massive cookies. We chilled out by the Aardvark food truck all afternoon and just did thru hiker town day stuff. 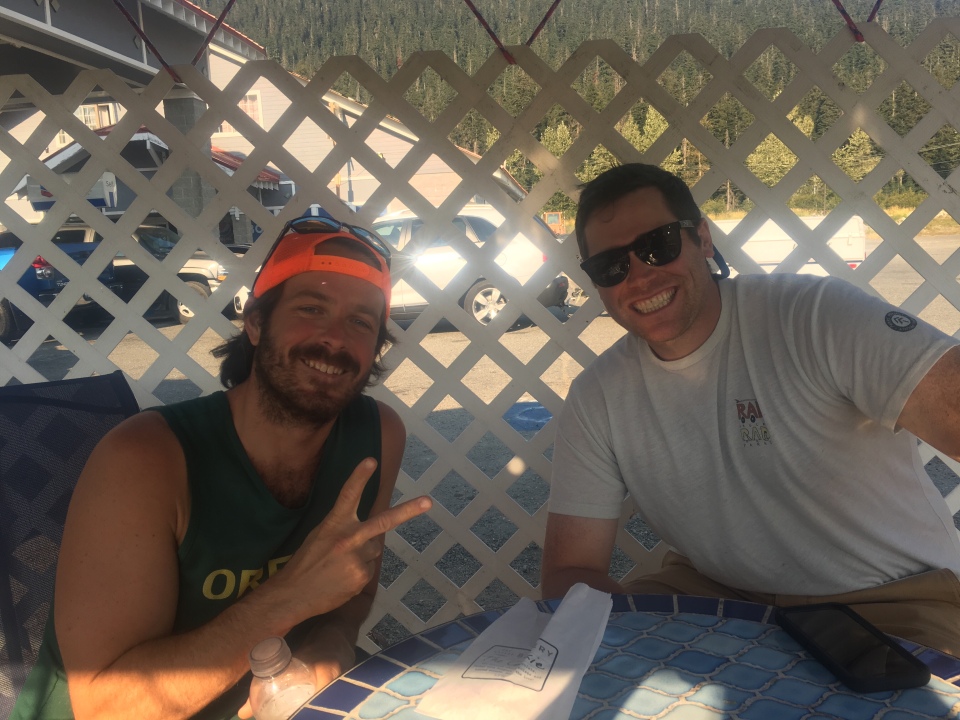 This morning we got back on trail after pummeling some omelettes and pancakes and had quite a day. The hike out of Snoqualmie Pass is a long switchbacked climb above the tree line to a little strip of trail called Kendall’s Catwalk(or Katwalk, but I refuse to write that). Once you get to this narrow piece of trail the views in every direction are spectacular. For the next 15 or so miles we contoured around jagged peaks and looked out at alpine lakes and other huge mountains. The footing was a little more difficult than usual and the miles a bit slower but well worth it. This is my third time up on this section of trail and the first on a clear day, looking to the southwest I could see Rainier and to the north I could see as far as Glacier Peak(I think). 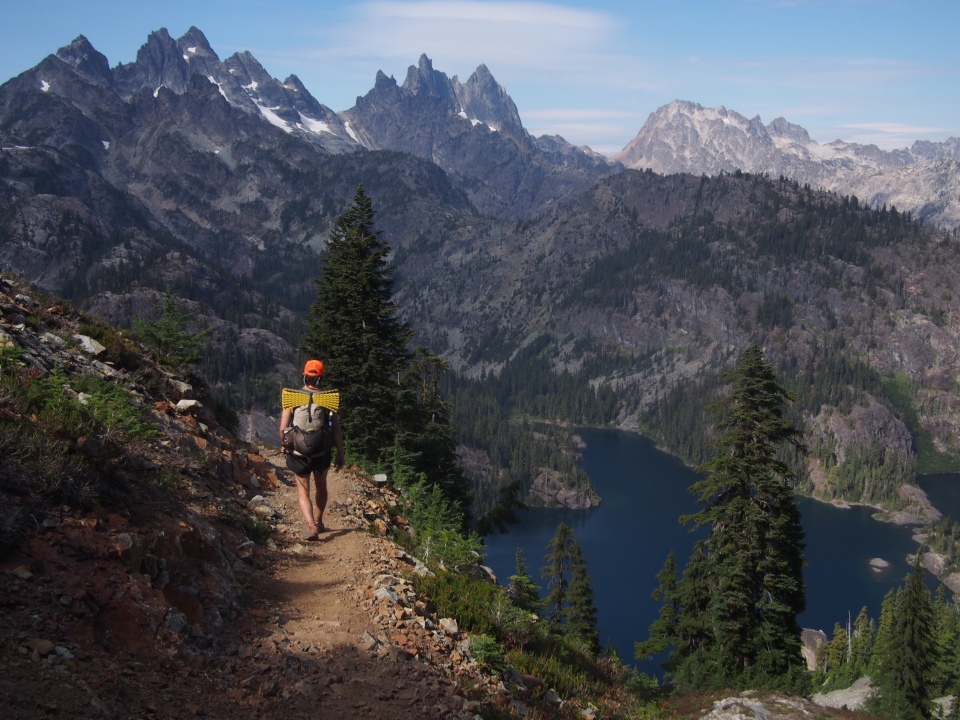 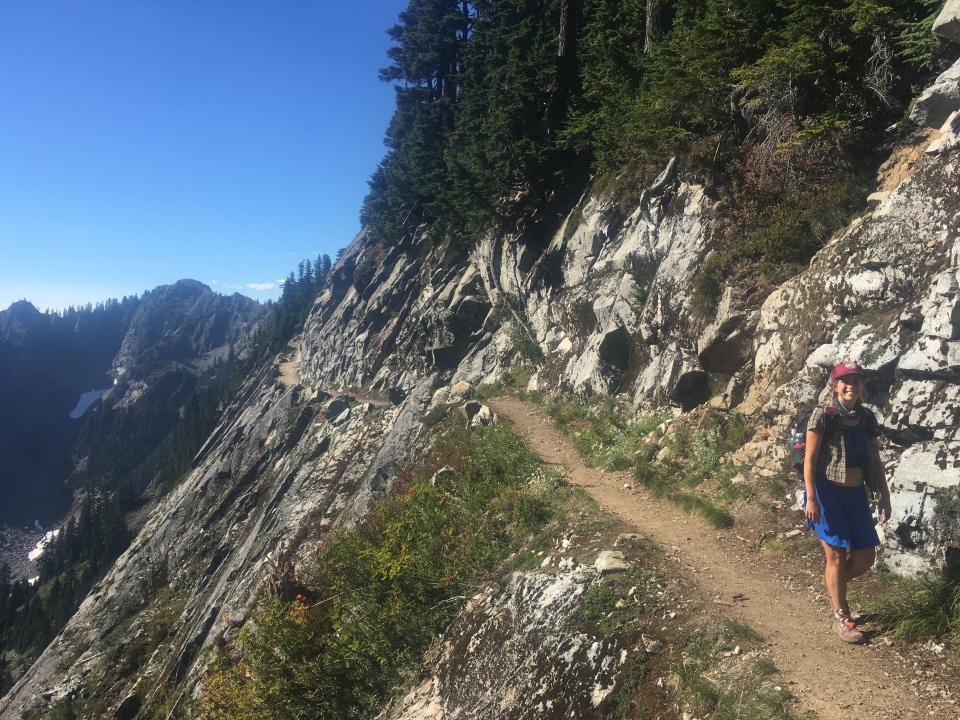 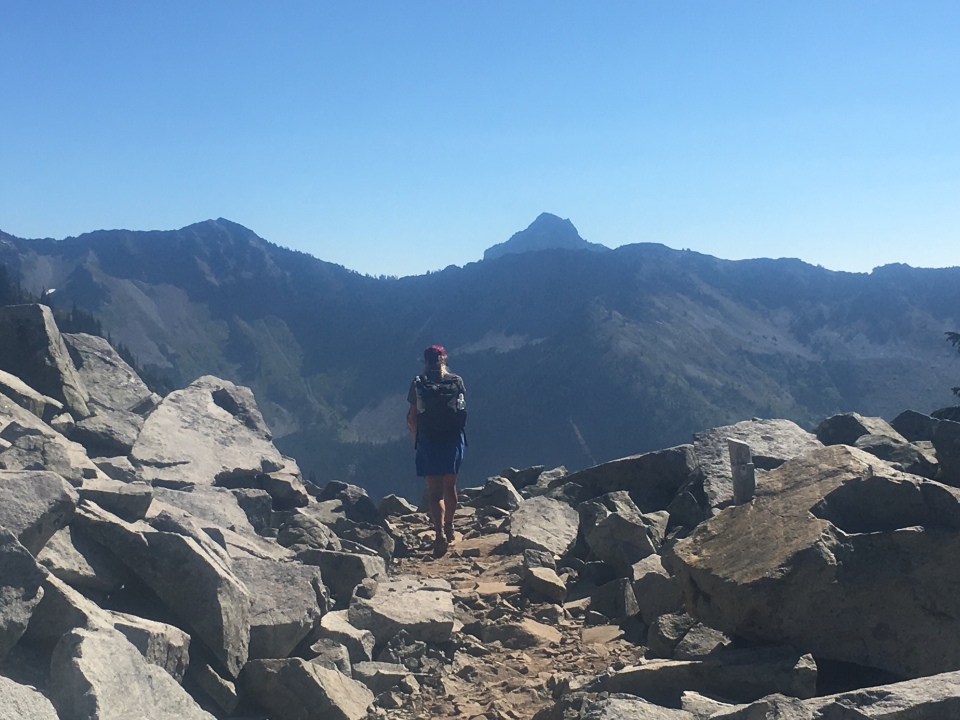 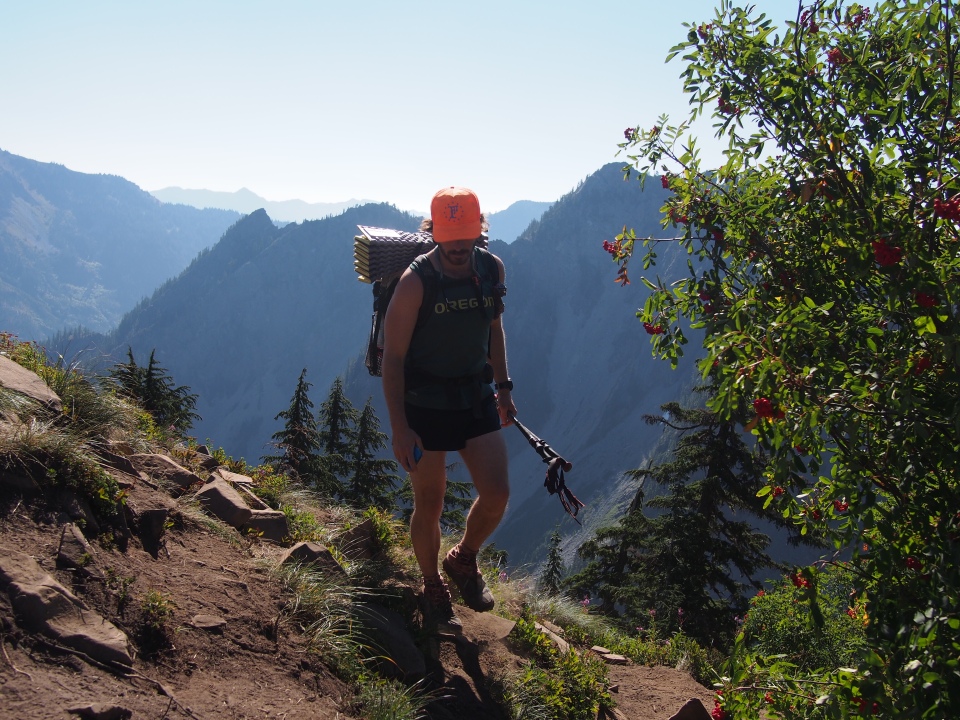 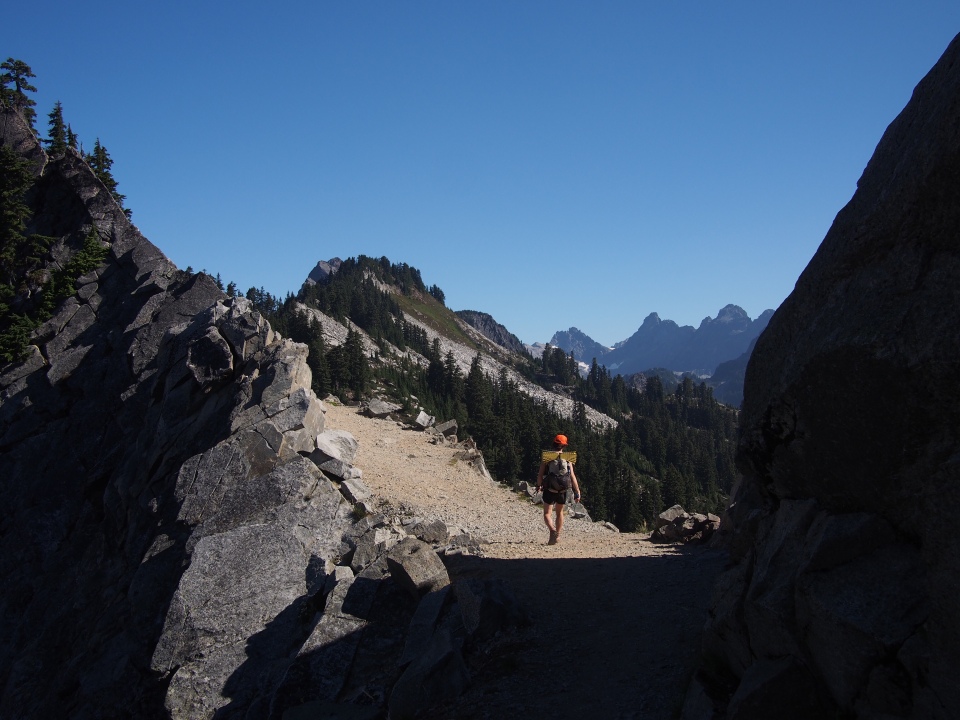 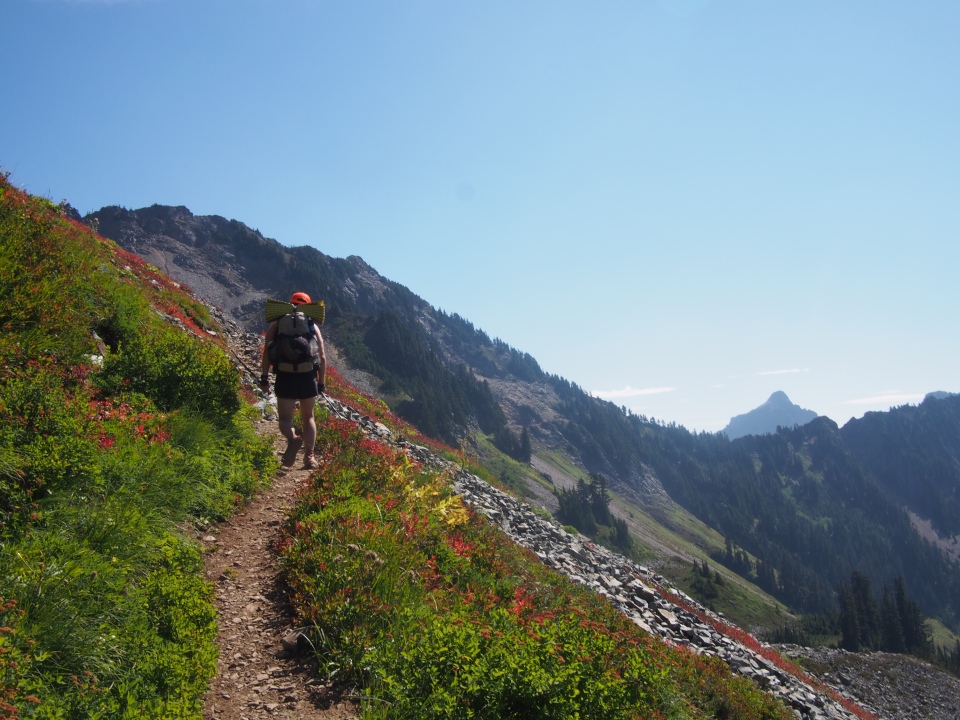 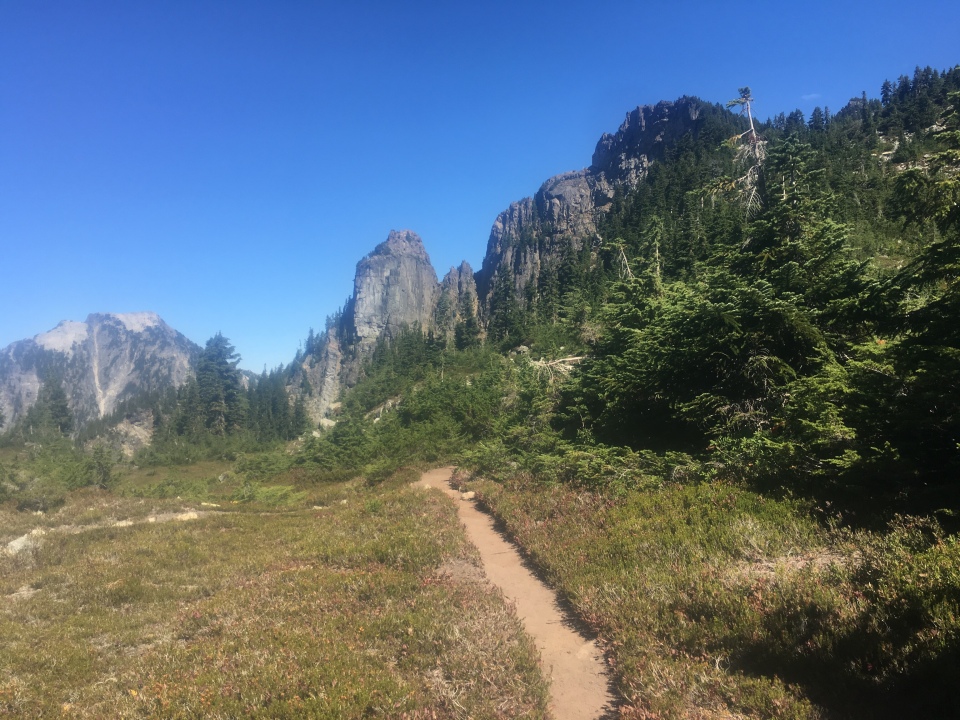 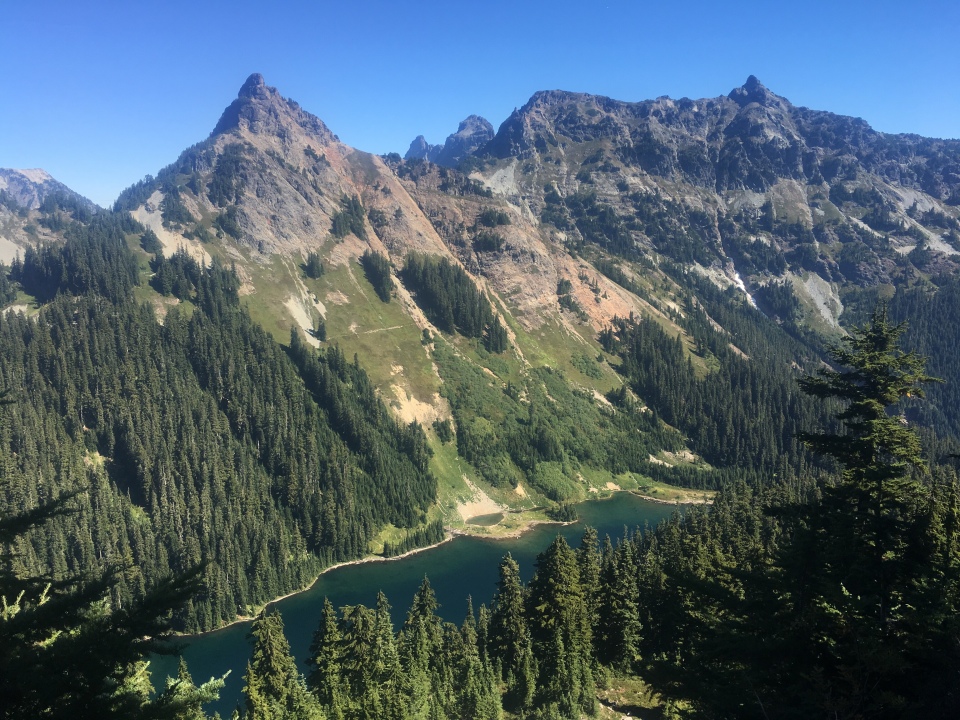 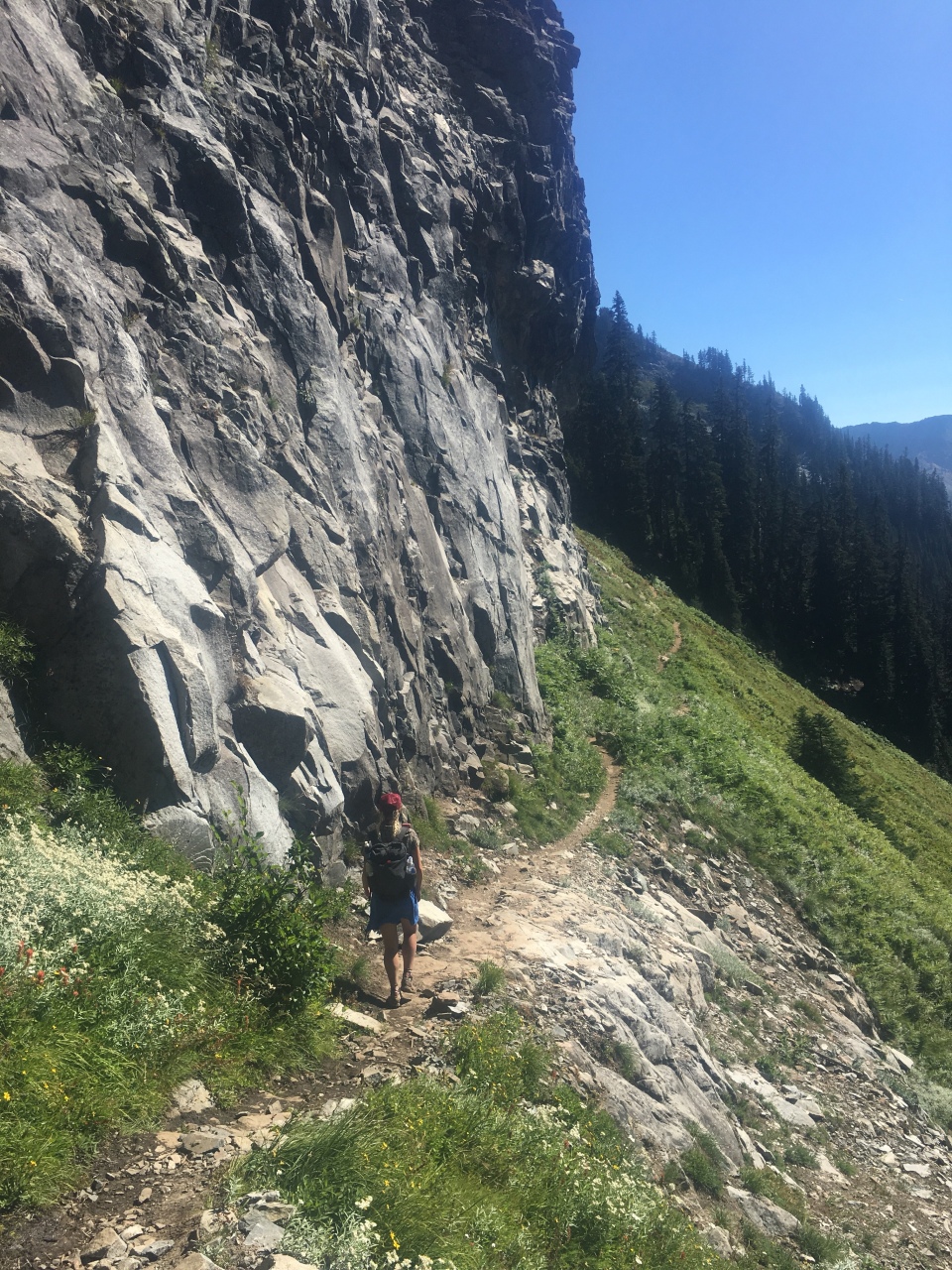 In the late afternoon we dropped a few thousand feet to a valley and along the way I took a quick dip in a swimming hole at the bottom of a waterfall. We crossed a river and then climbed big long switchbacks that brought us way up and out of the valley. With about 2 miles to the next campsite a cold rain had moved in with a crack of thunder and a flash of lightning. Luckily that was it for the T&L and the rain just gave me good reason to pick up speed for the rest of the day. We found a sweet campsite up high next to a little alpine lake. 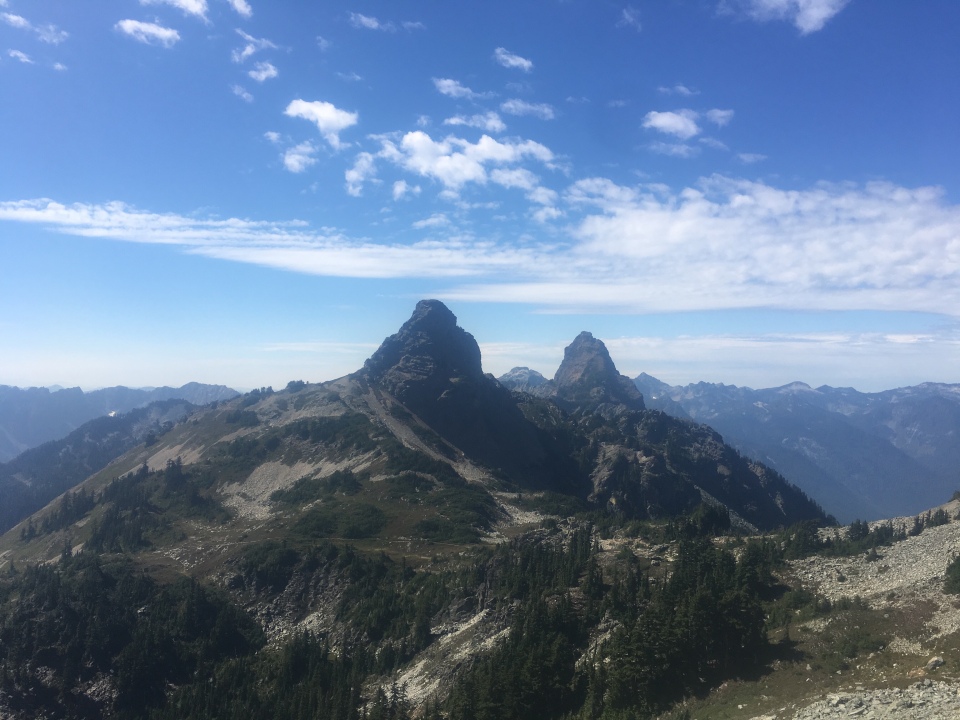 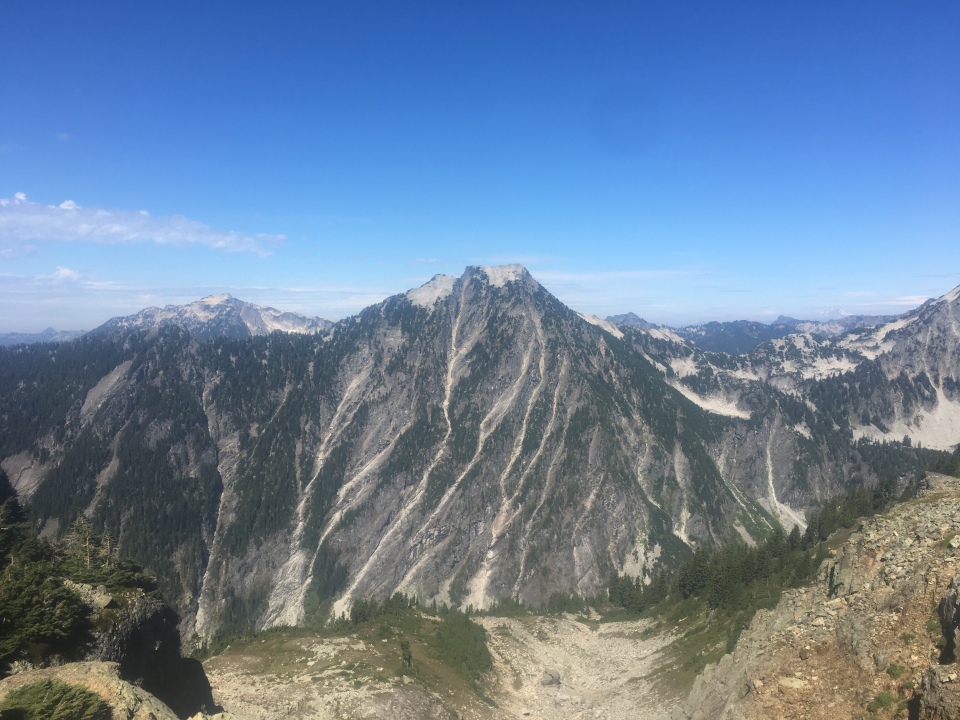 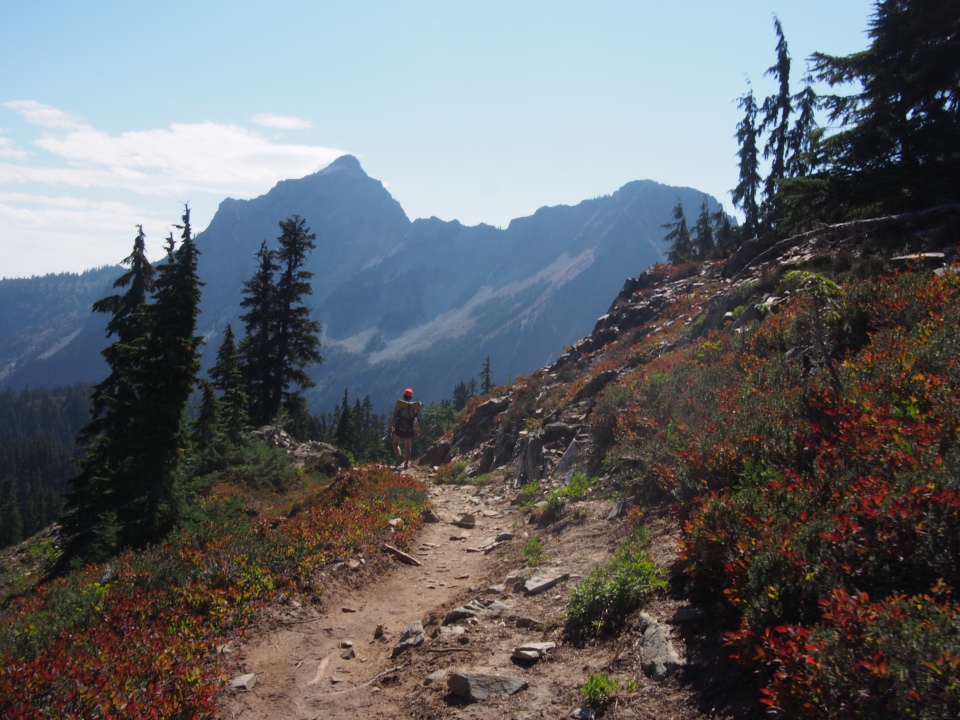 I’m pretty sure it rained all night, but I was busy sleeping peacefully so I didn’t notice. It was raining hard on the tent this morning when I woke up though and I thought we’d be walking through it all day. Luckily the rain stopped right around 7am so we packed up the wet tent and got moving. It was cold and wet for awhile and we had lots of clouds all day but it never rained. Good hiking weather, I’ll take that any day over rain. 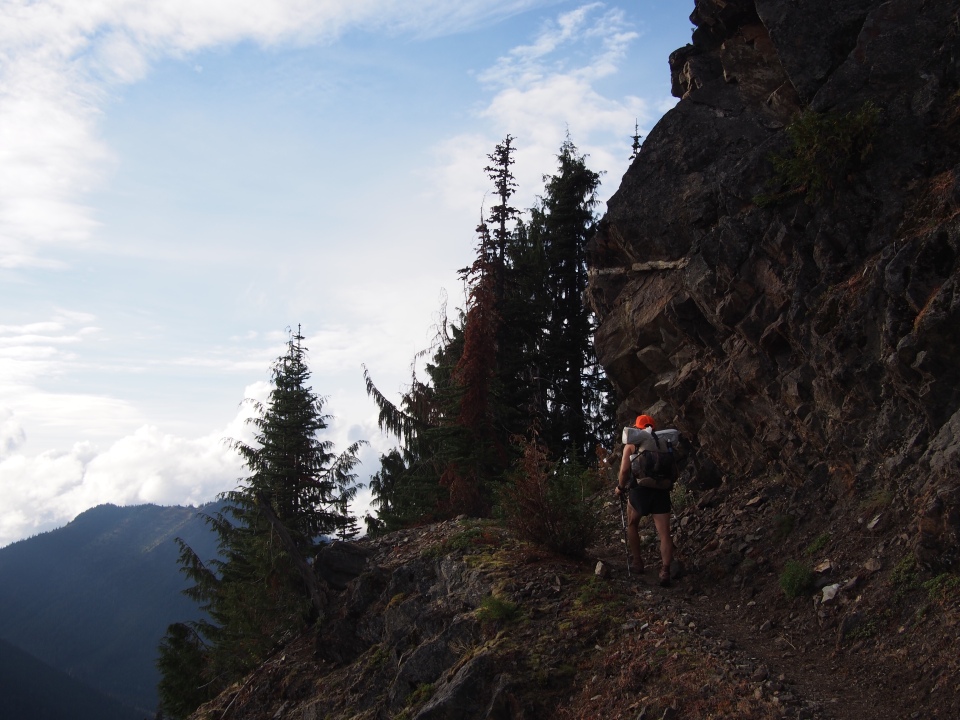 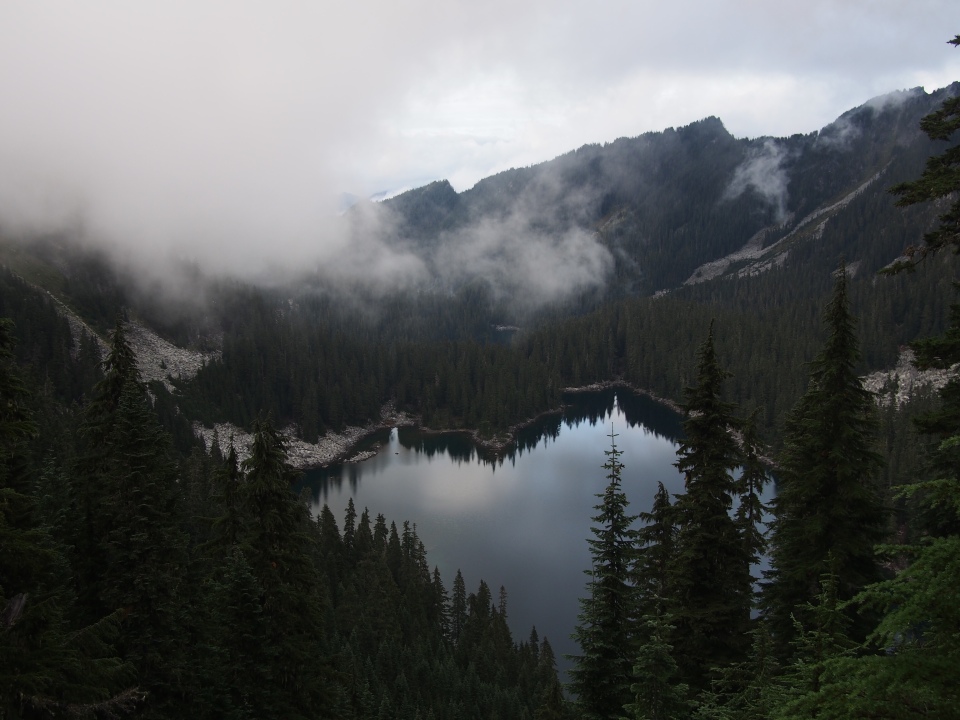 The trail dropped down from where we were camped and we walked through a valley for awhile then back up again. It seemed to do that all day. There were at least 3 named passes we climbed; Cathedral, Piper, and Deception. None of them seemed particularly difficult, we’d just walk up long switchbacked trails to a pass with views of jagged peaks and turquoise alpine lakes on the way up then do the same thing on the way down and look at new jagged peaks and turquoise alpine lakes. Washington is awesome. 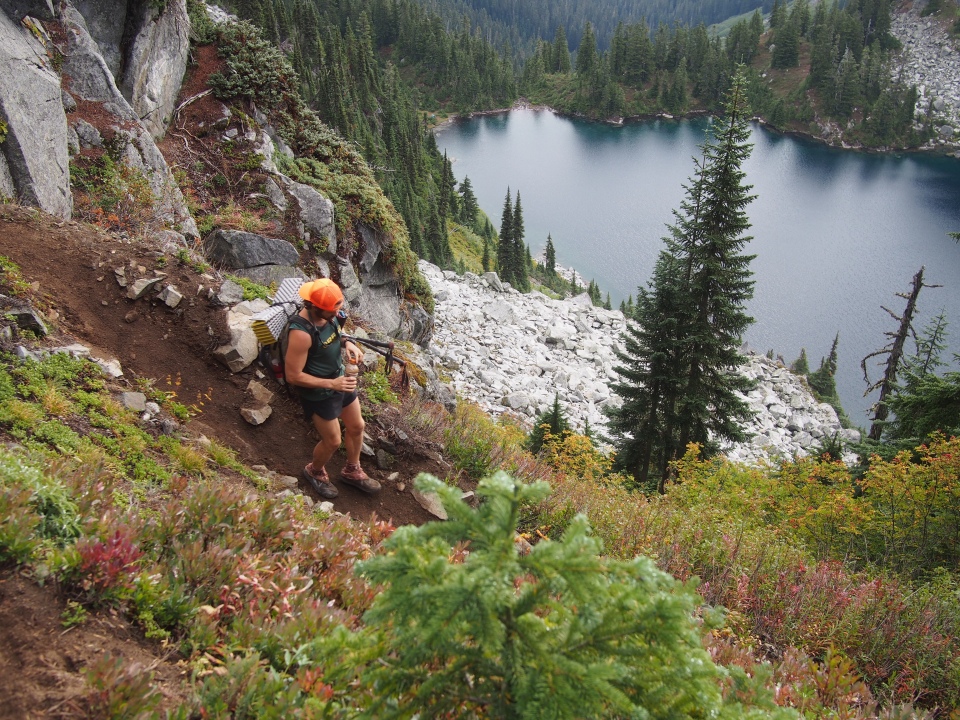 After walking down Piper Pass and through a boulder field we found a tent site next to Glacier Lake. It was a beautiful and productive 30 mile day. And it didn’t rain at all. 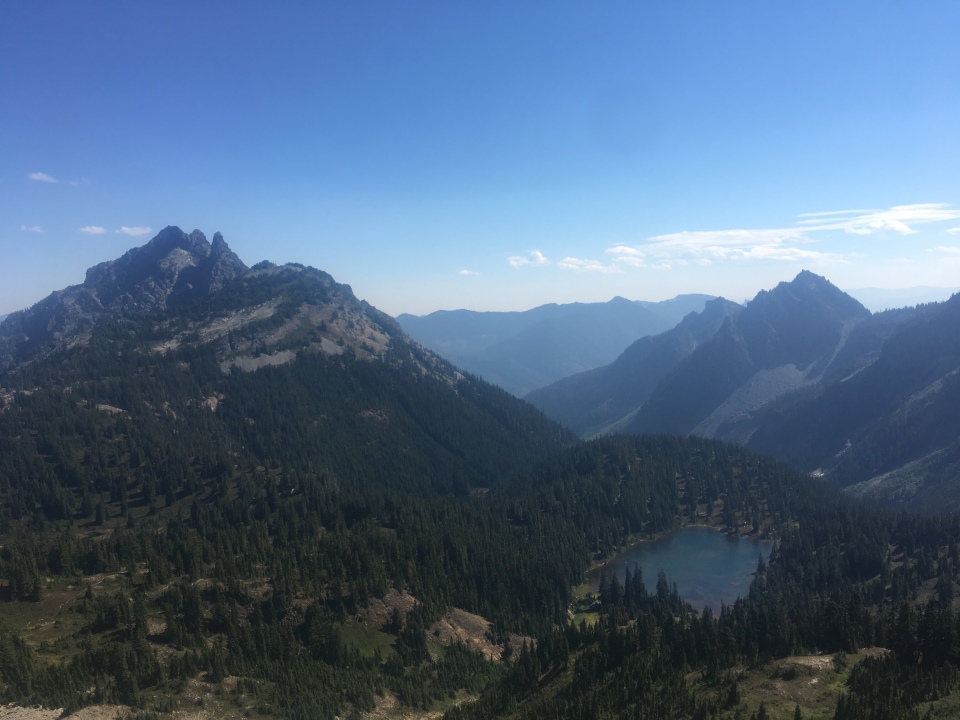 Woke up next to Glacier Lake to cool air and clear blue sky. Good day for hiking, most of them are. Today we had to cross route 2 and stop at Steven’s Pass Ski Resort to pick up resupply boxes we mailed out a month ago. It was a quick 14 miles up and down a couple passes, through a few valleys, and we were at Steven’s Pass for lunch. I did fall though. I put my foot on this slanted slippery log in the middle of the trail, not thinking anything of it, and it was like I stepped on a patch of ice. My feet went out from under me and I hit the ground hard with my right big toe taking the brunt of it. I’ll be fine and everything but my toe still hurts and I did a fair amount of whining for the next half hour or so. 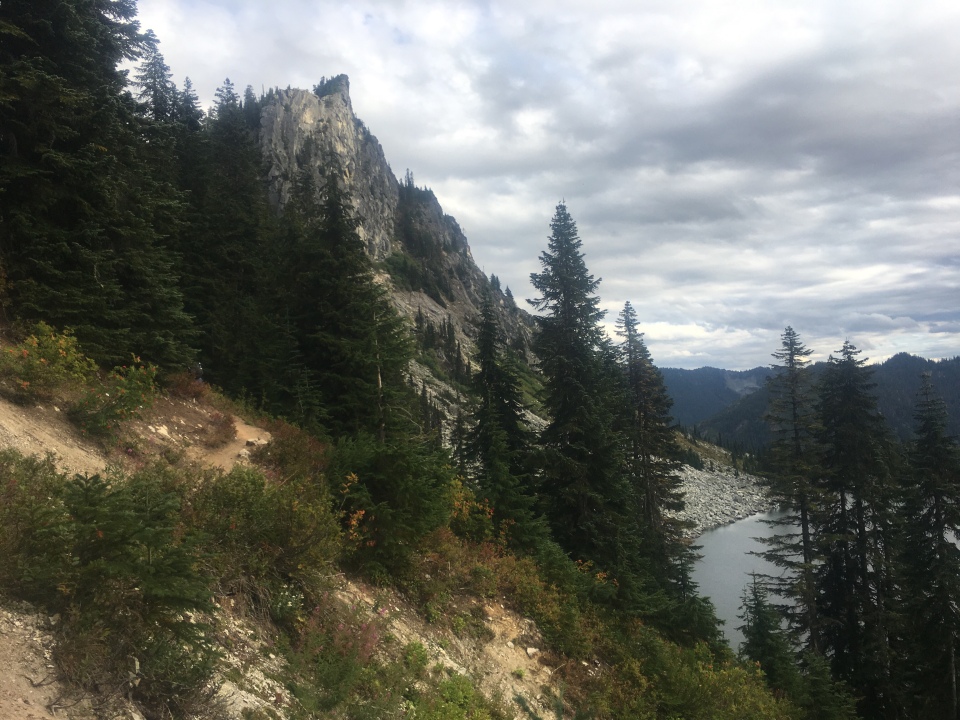 At Steven’s Pass we picked up our boxes, sorted our food for the next section and got a couple of cheeseburgers while letting our electronics charge up. This looks like a fun place to ski. It’s got a couple of peaks, it’s steep, and there’s lifts servicing the backside of the mountain also.

Back in 2015, Steven’s Pass is where my thru hike abruptly ended when I found out the trail ahead was closed due to wildfires. The following year I came back to Steven’s and got back on trail to finish what I had started. You can go back in time in this blog if you’d like to read about either of those hikes, but I don’t expect you to. No forced trail evacuations today though, we blasted in and out of town and got another 11 miles in this afternoon. We’re on a very serious mission.

It rained a good deal overnight and into this morning. When I first woke up, listening to the raindrops, I thought today would be absolutely miserable. But it wasn’t. The rain stopped and although a little bit delayed we packed up our tent and put on our rain gear. It never really rained the rest of the day but it was constantly threatening. It was misty and foggy, every once in awhile it would drizzle, and today was colder than usual. I never took off my rain jacket or pants all day. Being a little cold is still better than rain. The fog and the mist added an interesting change of scenery to an already beautiful Washington. At times it just looked like something out of the movies. It also feels so remote out here, we saw a few other thru hikers but we’re far from any trailhead or any road for that matter and there’s no day hikers or weekenders out here. 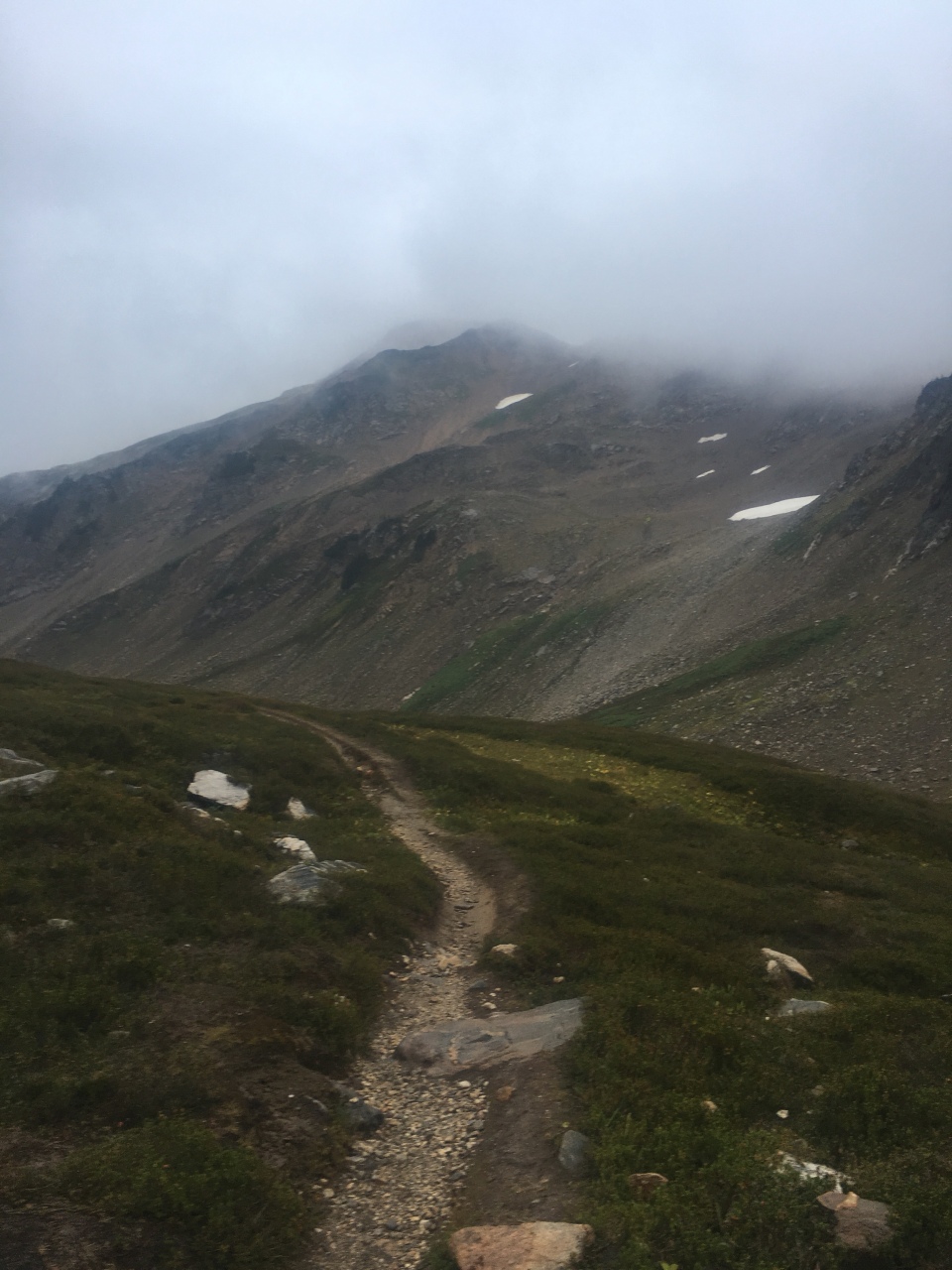 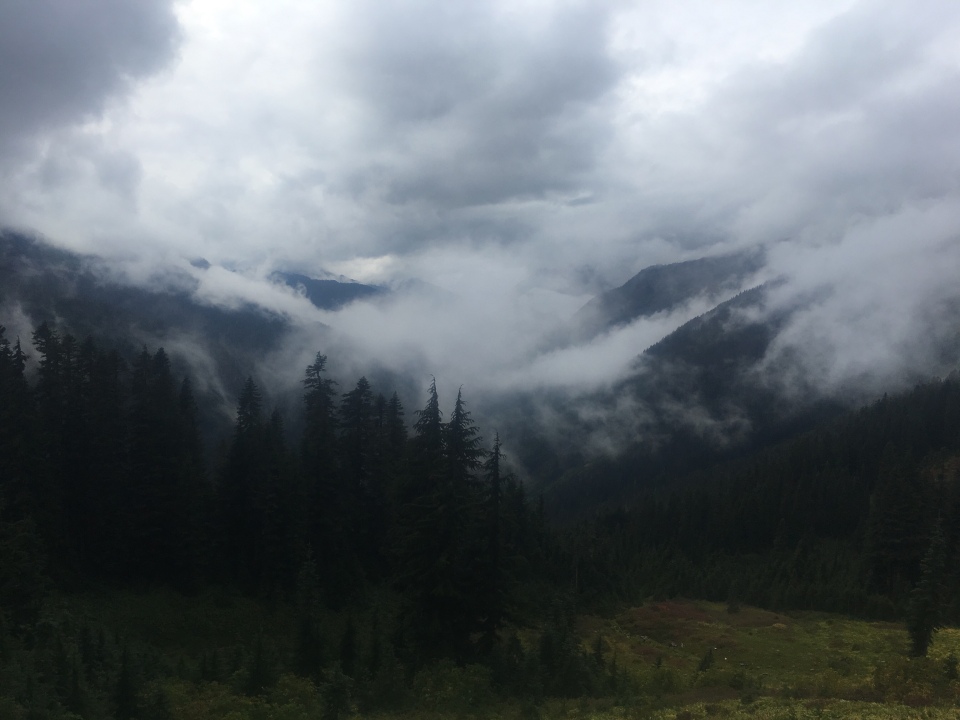 The trail itself was up and down all day. Mostly smooth trail through forest and contouring along mountains. The story of the day for me was definitely the weather and the way it made this place look. With a few miles left we dropped through a huge valley with steep granite mountains on the sides with their peaks obscured by clouds. The valley reminded me of a pass in Nepal that led to Tibet. This valley only leads to more of Washington and eventually a campsite next to a river.

When we got to the campsite I was cold, wet, hungry, and a kind of tired that I only feel after walking all day in this type of weather. We cooked in the vestibule and ate inside the tent: Annie’s Mac n Cheese with bacon bits, coconut oil, and a packet of Tapatio. This was one of the most delicious meals I’ve ever had.

I can’t sugar coat it, today pretty much sucked. At least the first half of the day. Right off the bat I saw an owl though, and that was cool. It swooped down in front of me and then perched itself up in a branch next to the trail for awhile. Then things went downhill(figuratively). It was cold and wet out right away. It rained overnight and the trail was overgrown so for about an hour I was getting soaked from both sides as the bushes gave the trail a car wash effect. When it actually did start to rain I was already drenched and wicked cold. Then it rained all morning and as we climbed higher it turned to a ‘wintry mix’ and then to snow. As we descended it would go back to a cold, cold rain. We figured we had 2 choices: either set up the tent and get into dry clothes to wait it out, or just keep walking to try to stay warm and eventually it would stop(finding a relatively dry place to just sit and wait it out and warm up wasn’t an option, too cold for that.) We chose the latter and that ended up being the right move. It was miserably cold and uncomfortable but we weren’t quite in danger and I really thought the sun would come out soon and make everything all better. This was one of my hardest days on trail that I can remember and Sara wouldn’t even commiserate with me because she was too busy belting out show tunes.

Her positivity worked though because after 4-5 hours of weather, as we walked over Mica Lake Pass, the sun did come out in all of its glory. Moments earlier it was dark and dreary and we were crunching through snow and now the sun lit the whole world up. A tremendously bright rainbow appeared and the sun shown on the glistening peaks that were freshly snow capped. The steam was rising from the ground, there were waterfalls seemed to sprout from everywhere, and I suddenly felt warm. It was glorious. 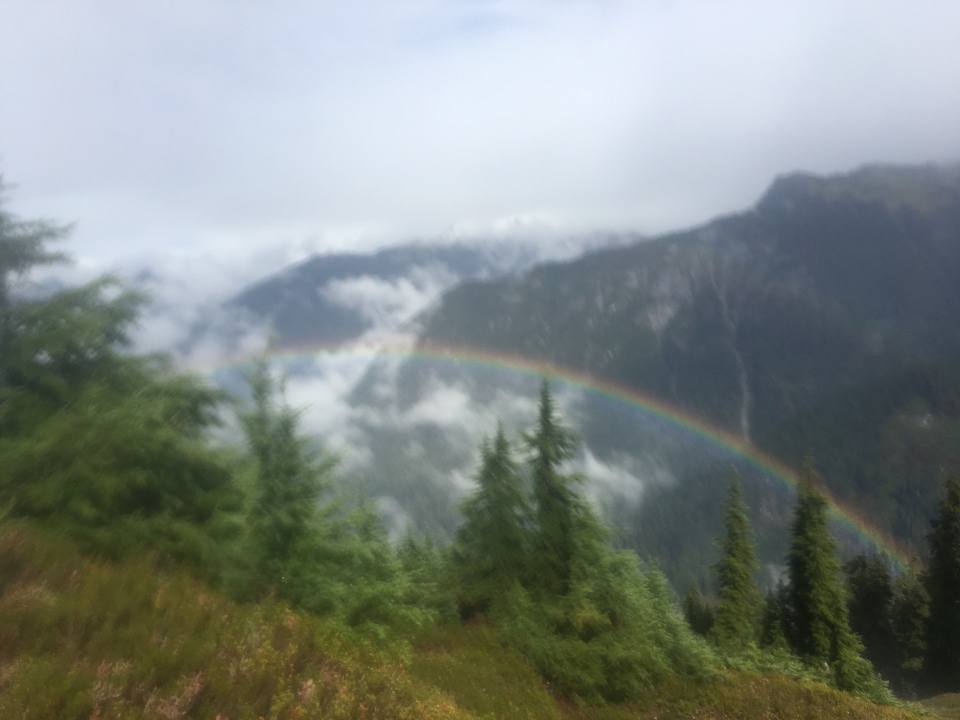 Nothing as wild as this happened the rest of the day. We did dry out and walked a huge uphill followed by a huge downhill around Glacier Peak. This evening it felt so good to finally be lying down and dry inside the tent. 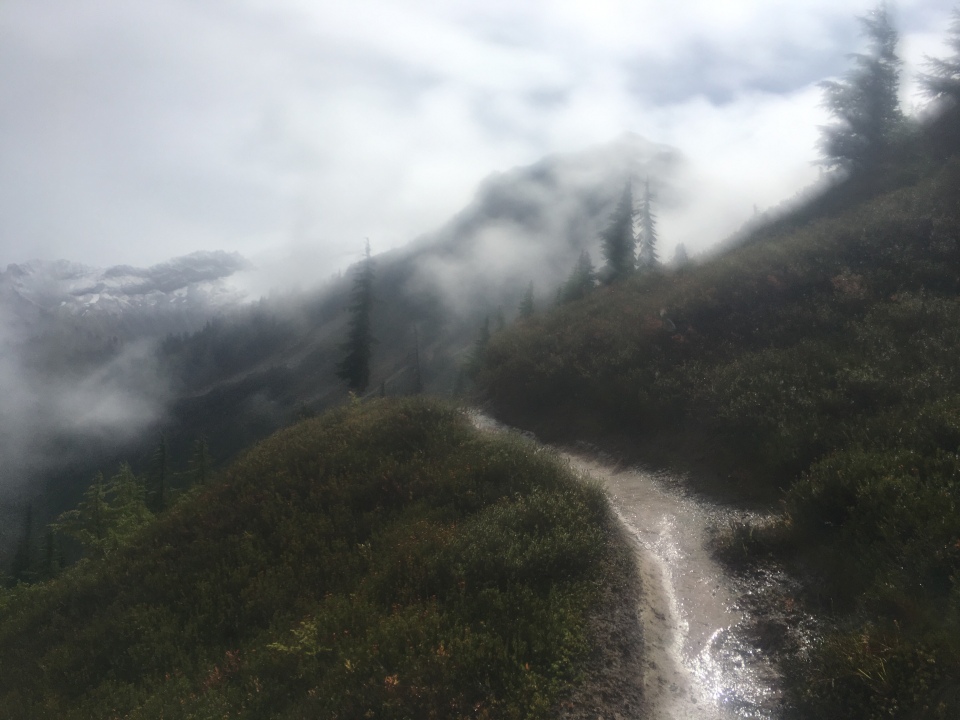 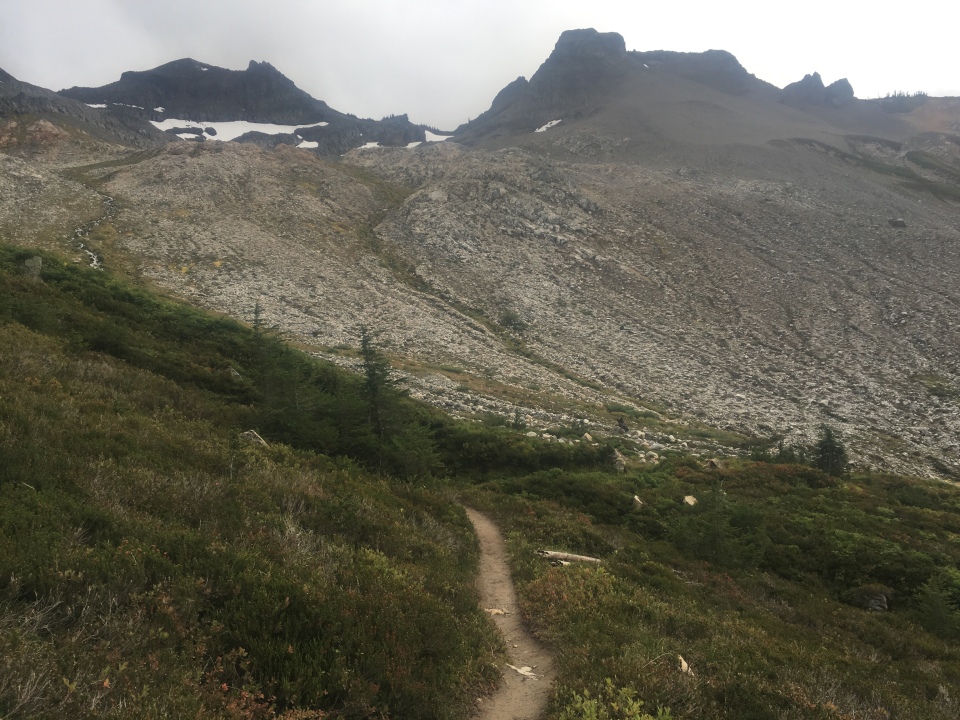 What a treat this morning was. If yesterday morning the PCT slapped me in the face, then today the trail welcomed me back with open arms. We walked along smooth soft dirt for a few miles through a forest full of big huge old growth trees until we got to a bridge that crossed the Suiattle River. On the other side of the river the trail was still pretty cruiser and had a gentle incline for the next 10 miles. 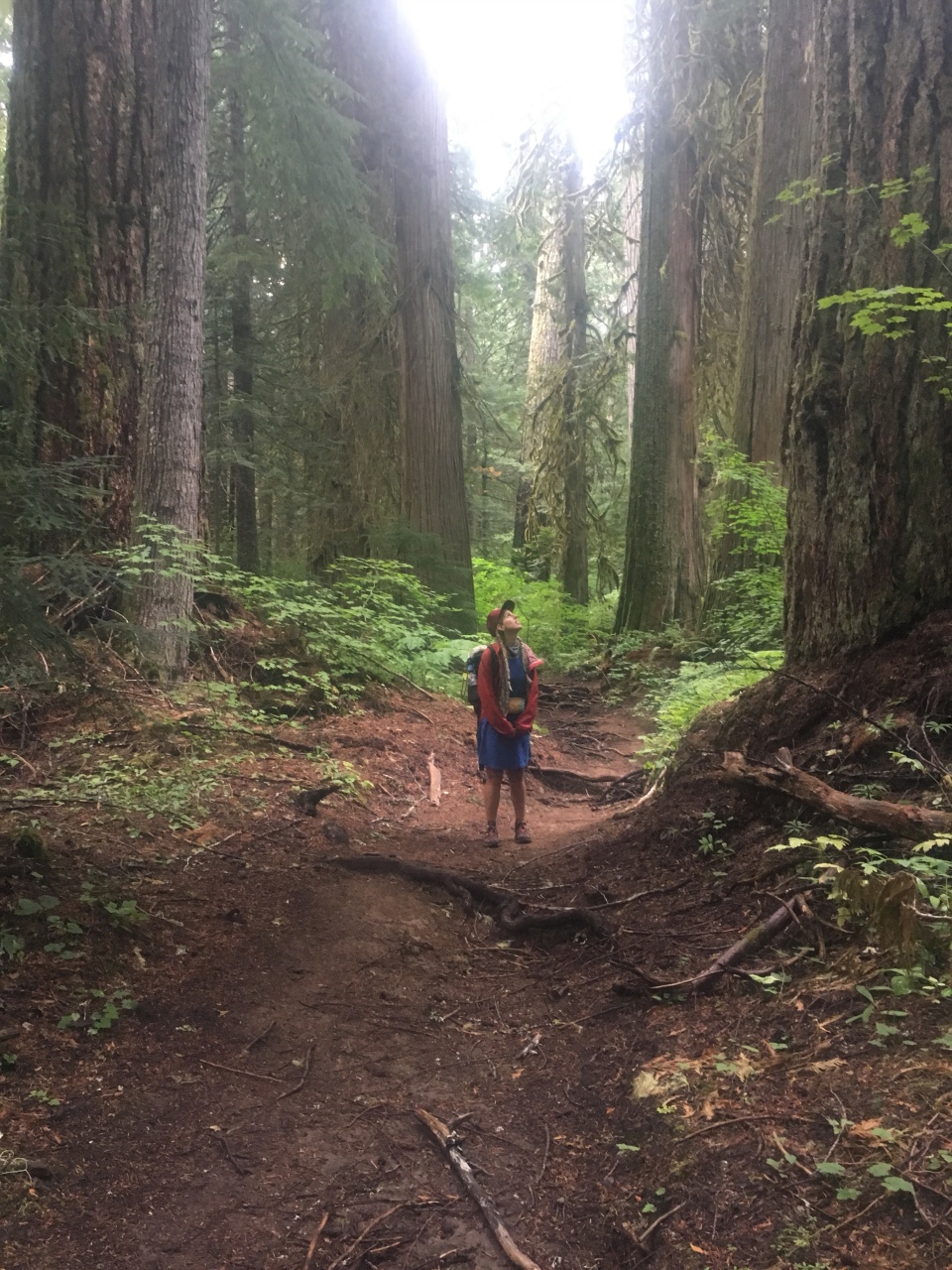 We’re aiming for the town of Stehekin, but due to wildfires part of the trail is closed and we’ll have to walk the reroute. The detour isn’t actually all the way into Stehekin and doesn’t connect back to the PCT. So we’ve got 2 options with one of them involving a boat, I’ll try to explain later. 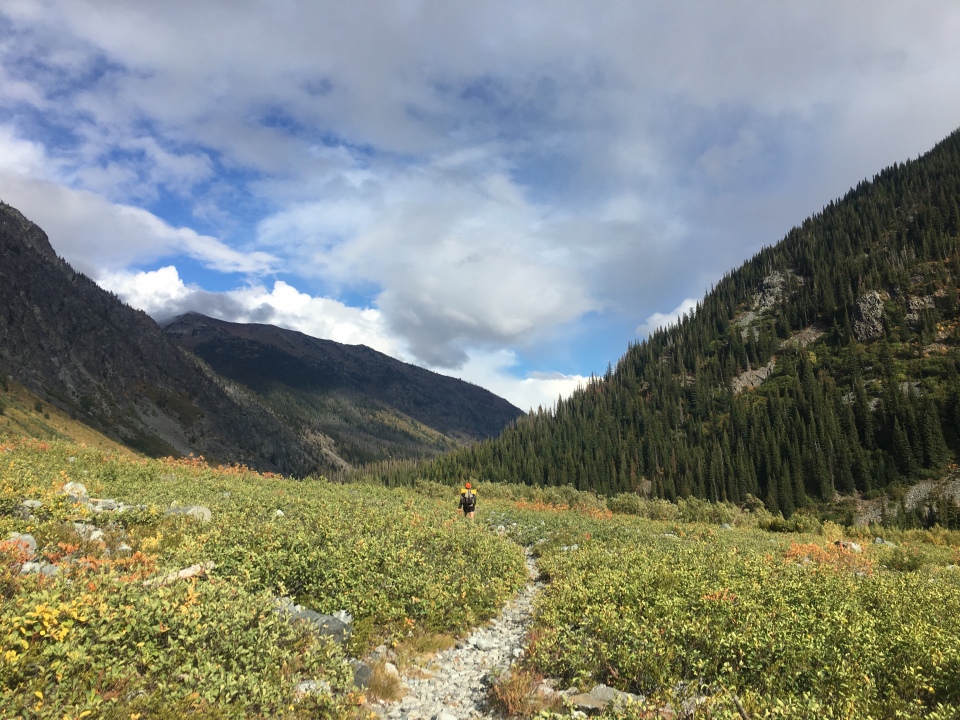 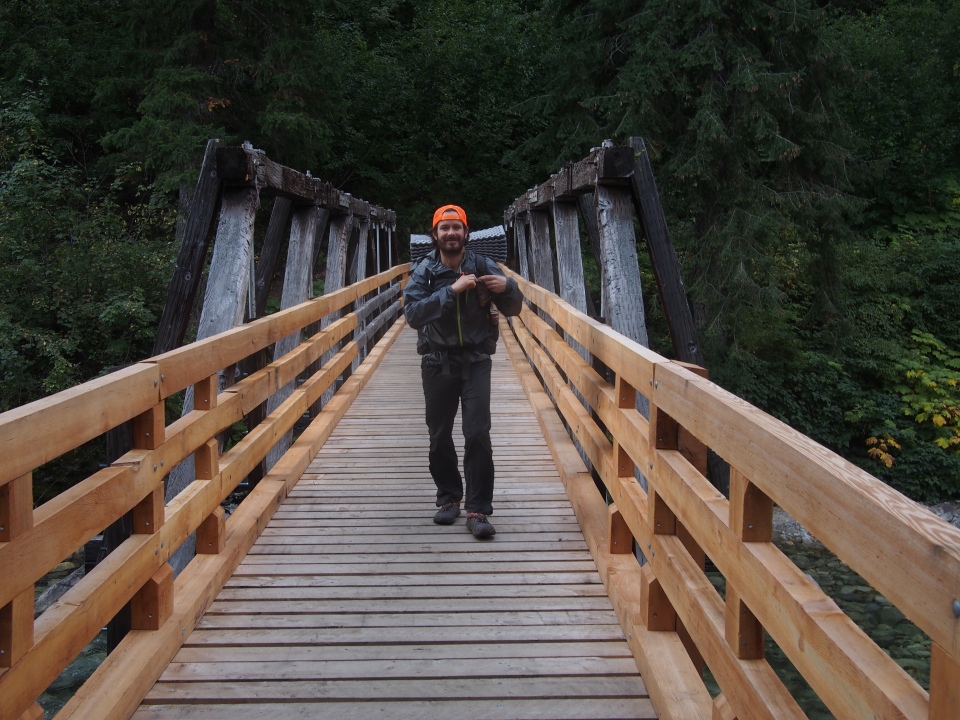 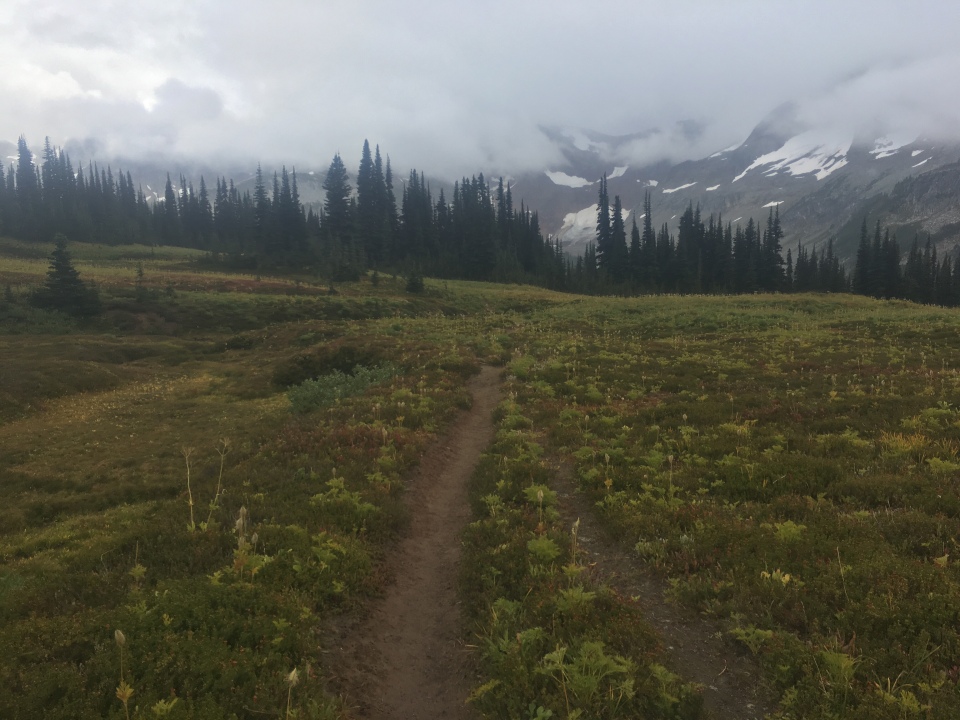 The reroute started 17 miles into our day and brought us up and over Cloudy Pass and down into a valley with beautiful Lyman Lake. This place was really incredible to see and if it wasn’t for this fire detour I probably never would have walked through here. It rained again while we were in the valley but I knew it wouldn’t last and once again the sun came out and produced a beautiful rainbow. From Cloudy Pass we walked 10 miles to this tiny place called Holden Village(It’s not really a town, I guess it used to be a mining camp and now it’s a Lutheran Retread Center?). Tonight We’ll camp outside of Holden Village then tomorrow take a shuttle to Lake Chelan where we’ll catch a ferry to Stehekin. Our other option would be to walk another 17 miles of detour that doesn’t bring us back to the trail anyway and still have to catch a bus to town. North of Stehekin the trail is open again so as long as we get our boxes at the P.O. and a permit to stay in North Cascades NP tomorrow night, we’ll take the shuttle 10 miles out of town to get us back on trail for the final stretch. You followed all that, right? 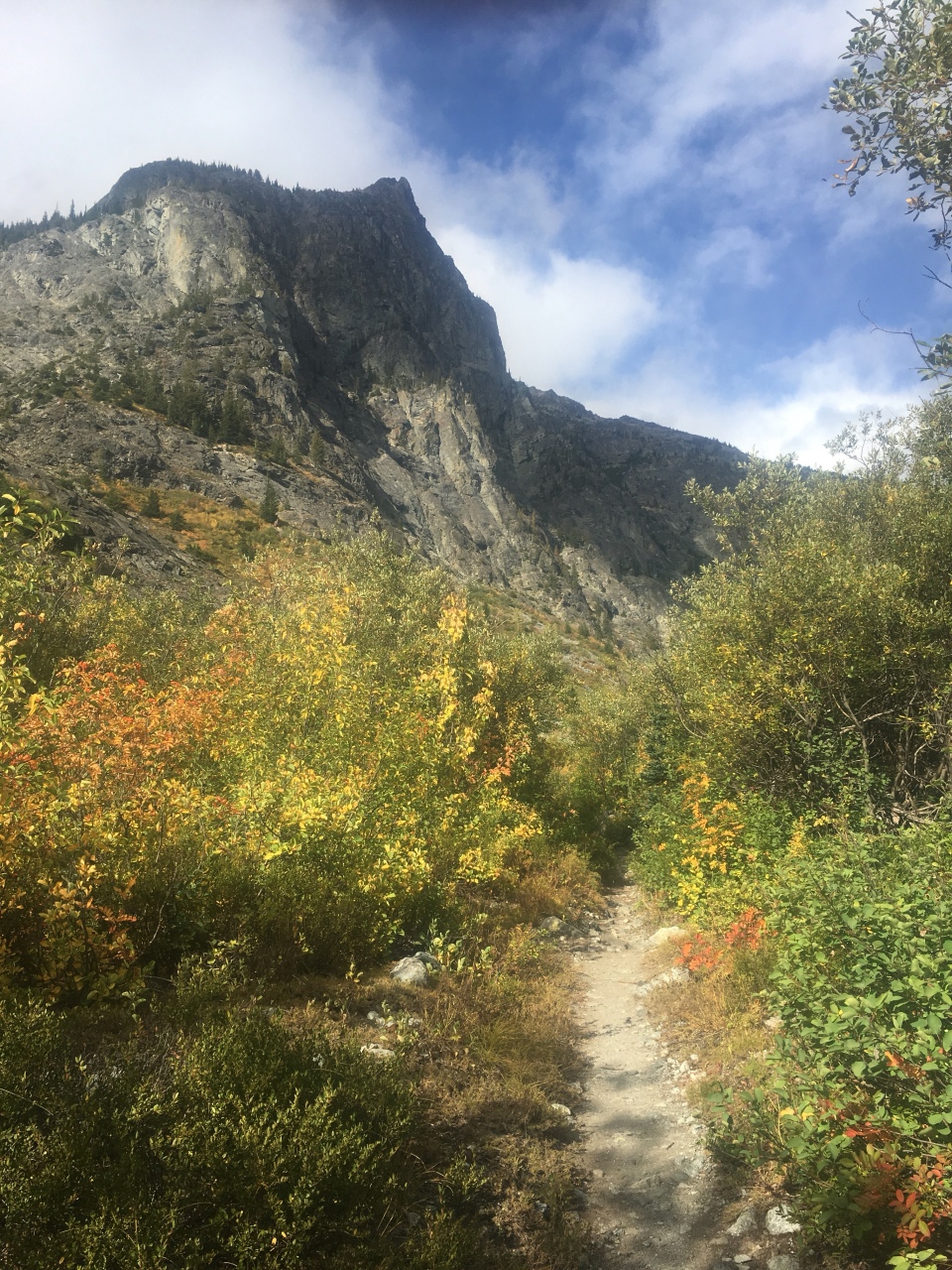 Posted on September 18, 2018 by endlesspsummer