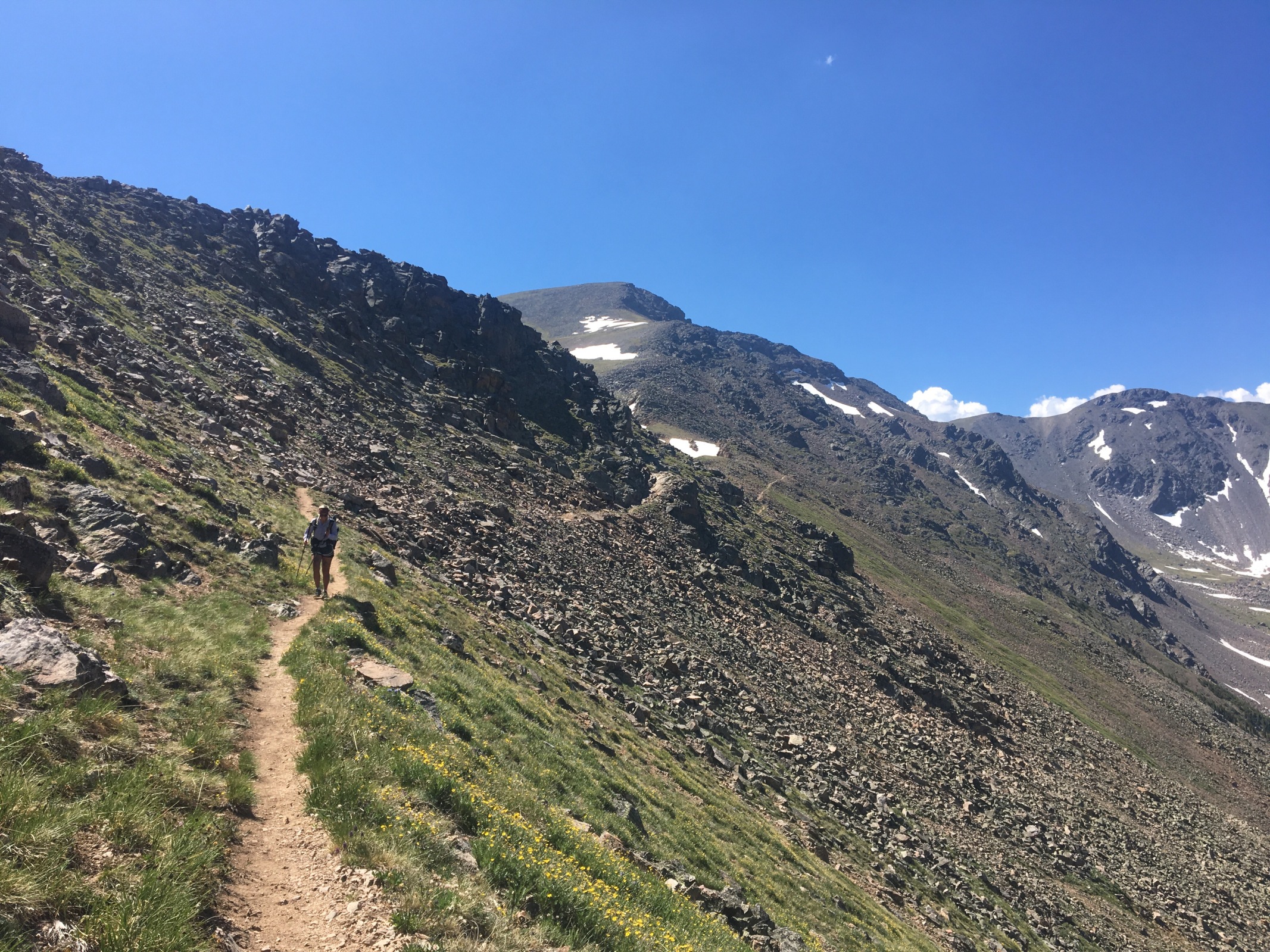 It was nice to be in no hurry at all this morning and I slept in a couple hours. QB and I grabbed breakfast at a restaurant near the hotel and I went for the Denver omelette scramble plus a pancake. Then we went across the street for ice creams from McDonald’s before taking the free bus to the supermarket in Fraser, a town a couple miles down the road. The supermarket was a zoo with everybody out shopping for the holiday. I accidentally grabbed a box of reduced fat cheezits instead of regular. This is crap because the ‘reduced fat’ label is tiny and easy to miss. Anyway it cost me about 20 minutes of waiting in 3 different lines; the first was to get to a register where the girl told me I had to go to customer service for returns, at customer service I waited while the guy took forever selling this woman a fishing license before taking care of my cheezit return, and then I had to pick out another salty snack and wait in the checkout line again(I went with Lays potato chips this time, it will be awhile before the cheezit company sees any of my money again). In hindsight I should have just suffered through the box of reduced fat cheezits. Right away after leaving the market we put our thumbs out and got picked up by Tim and his grandfather who drove us all the way back up to Berthoud Pass. At the pass we ran into Hannah and Charlie, who we first met in New Mexico, and bs’ed with them for awhile before getting back on trail. Leaving the parking area we walked steeply uphill to a ridge and continued until Flora Peak up over 13,000 feet before starting to descend. It was super windy up there and at one point we had to duck below a man made rock wall to escape the worst of it. The winds died down but we did catch a little bit of hail later on and even some rain but nothing crazy. We walked through a pretty amazing valley and had views of a faint rainbow in the distance before finding a place to camp in some woods near a creek. 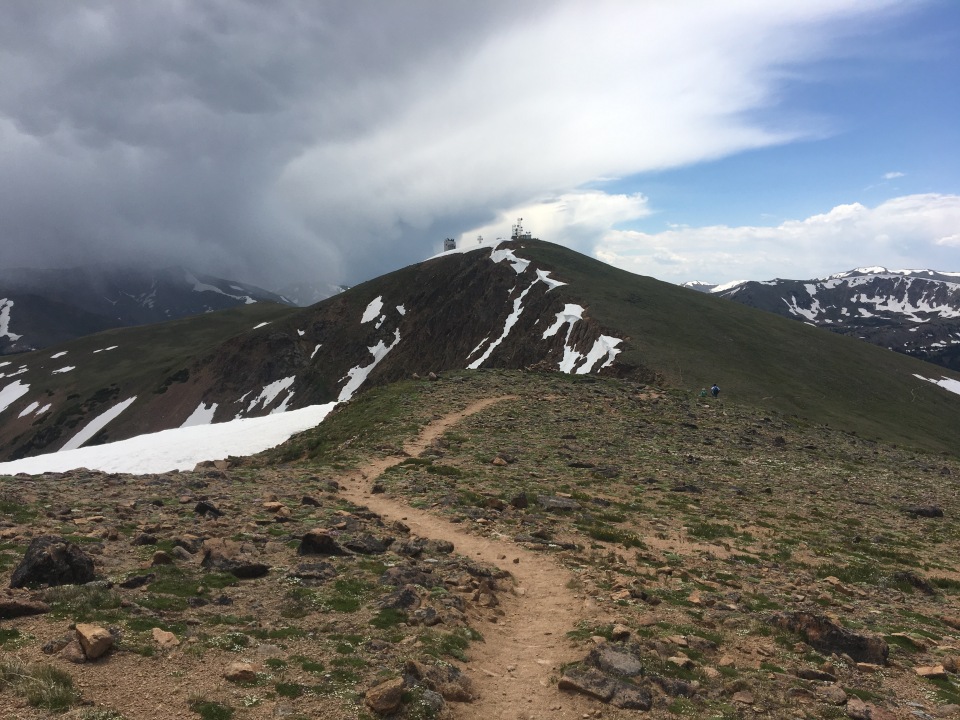 I slept like a rock last night. 8 hours straight. It might have been the greatest night of sleep of my life, at least top 10. After leaving this super cozy campsite, I followed the trail as it gradually and then steeply climbed up out of the valley and onto a ridge topping out over 13,300 feet on James Peak. It was something like a 3000 foot climb to start the day. The trail then followed a ridge for about a dozen miles and we had amazing views for most of the day. A lot can be said for cookouts fireworks and parades but walking over around and through the purple mountain magesties of the Rockies on the 4th of July is probably my favorite way to celebrate America. It was cool to see lots of others out hiking today and there was even a good amount of people skiing what’s left of the snow in the backcountry. We eventually dropped below tree line and walked the last 10 miles or so in the woods before finding a soft looking campsite beside the trail. 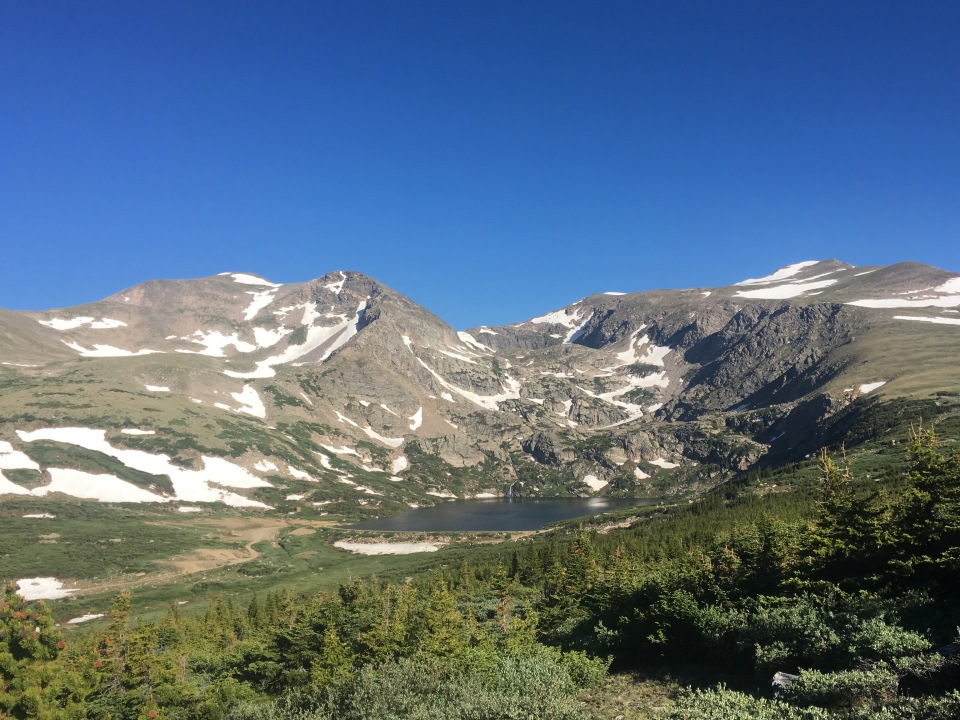 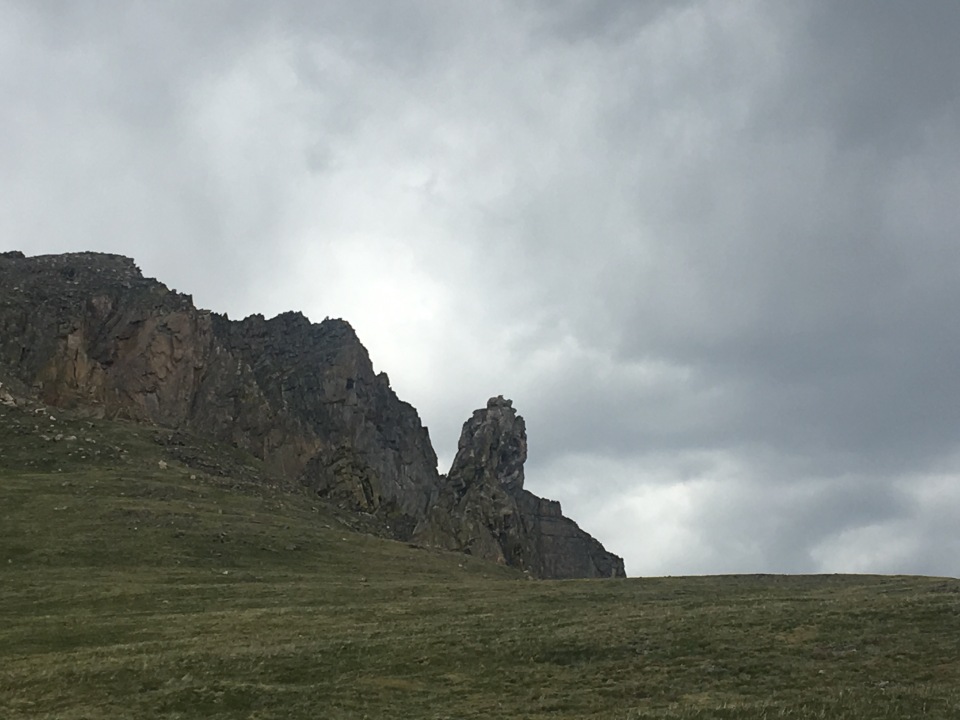 Another solid night sleep on some cozy ground. On this day last year I was summiting Katahdin to finish the AT and today I’m crushing miles walking into Rocky Mountain National Park, both great days but I couldn’t help thinking a lot about the Appalachian Trail this morning and I look forward to hiking it again someday. We descended for most of the morning until we came to a series of lakes and then walked along them staying below tree line for the entire day. Right before we got to Monarch Lake I came around a corner and immediate was within 10 feet of a great big bull moose. I startled the poor fella and he bolted down to the edge of the lake. Once we rounded another corner we got a sweet view of him doing his thing in the distance and shortly after that saw a cow moose with two calves in tow. It was awesome. For the rest of the day the trail skirted the edge of lakes and for lunch QB and I ate on a beach and went for a swim. There were a lot of boaters out and I nicely asked one guy to pull me skiing. He thought that was funny but I wasn’t joking. The trail crosses into RMNP and then goes right through the vacation town of Grand Lake. Our friend Katie, the recent newlywed we saw get married in Illinois, was in nearby Estes Park and came to meet us for supper. We missed Boone by a day. Immediately after getting into town, QB and I ate cheeseburgers and sucked down coke floats so when Katie showed up we weren’t completely ravenous and could relax while waiting for second supper. In honor of Townes Van Zandt we ate fish tacos and quesadillas at Pancho and Lefty’s and had a great night. Since we’re in RMNP there’s all kinds of rules like we can’t just set up wherever we feel like it so we had to go to a pay campground for the night. This is against everything I believe in. At least I’ll take advantage of their showers, even though I swam today and that should hold me over for awhile. 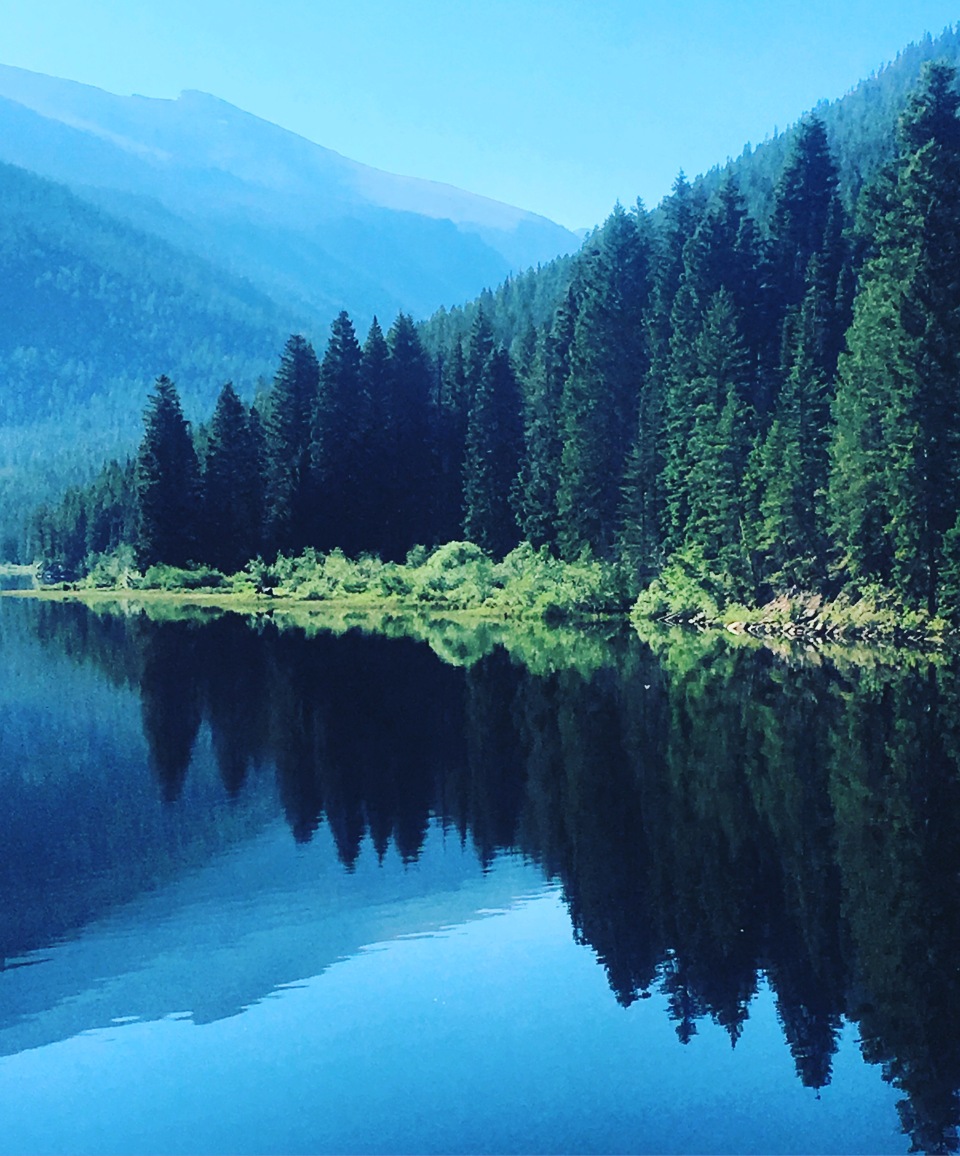 I swear there’s a moose in this picture 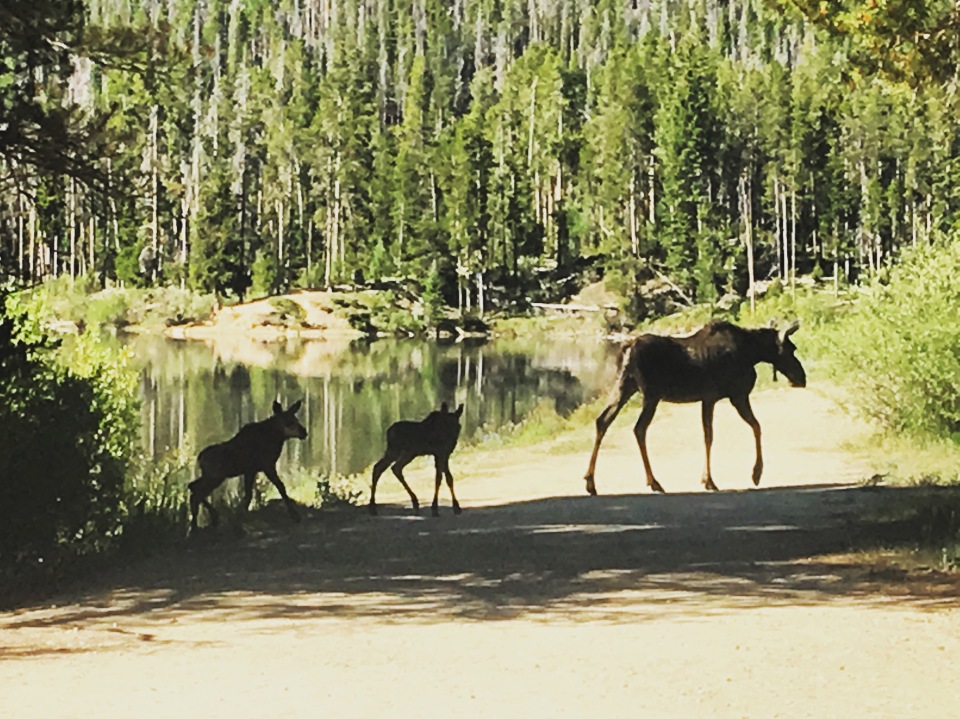 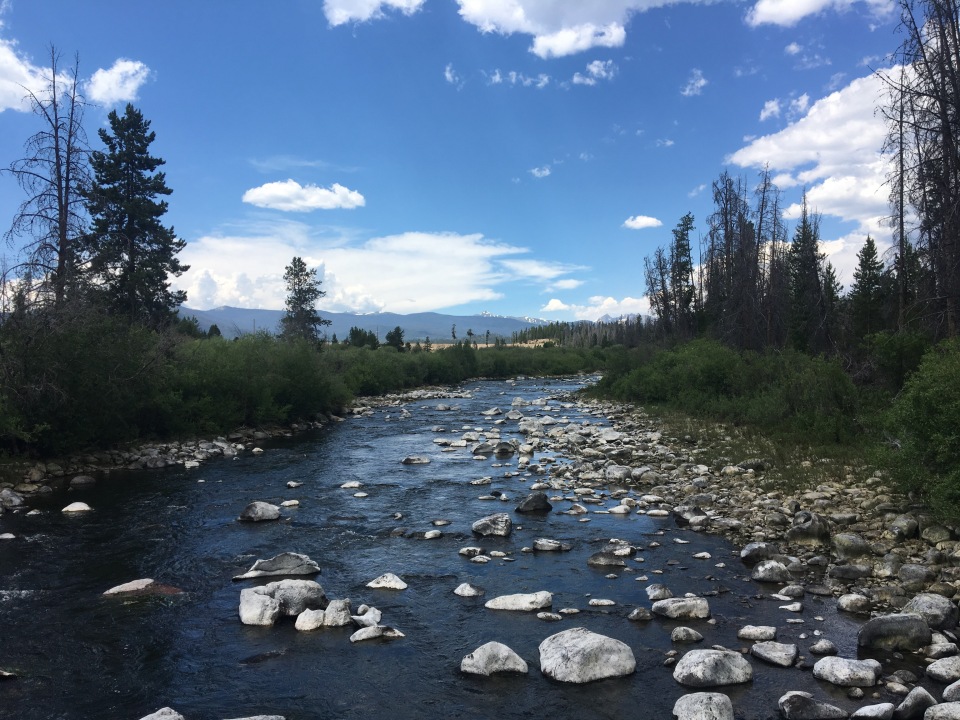 those things don’t even have UV ray protection

Katie and QB no doubt laughing at one of my jokes 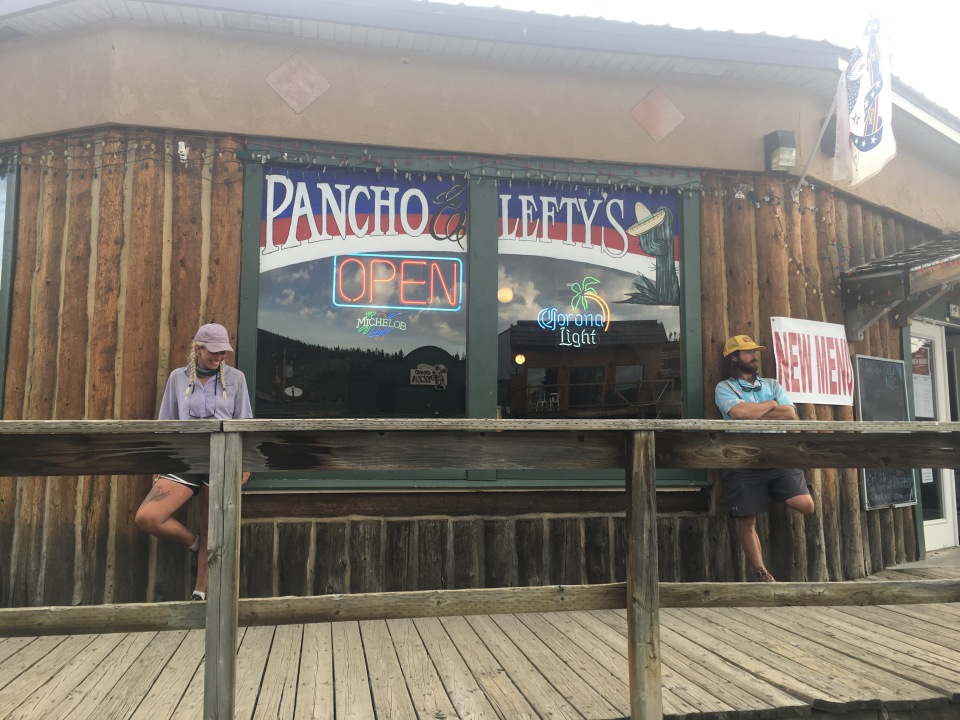 looking as cool as possible

Posted on July 6, 2017 by endlesspsummer