Ghost Ranch was pretty cool. The place had AYCE (all you can eat) meals 3x a day and the food was good, I ate more than my share. Besides Speed, Queen B and myself there were a handful of other hikers there including Moses and Operator. These two are both from California and also ultrarunners, they are really the only other hikers that seem to be going about the same speed as us. We all stuck around for the buffet style breakfast this morning and then headed out around 8:30 with super heavy packs. It felt like I was carrying a piano. A grand piano. There’s supposedly a bunch of snow in this section so I walked out of Ghost Ranch with snowshoes, microspikes and an ice ax. Plus, since I plan on going a little slower due to the snow, I’ve got 5+ days worth of food. Once we got back on trail we climbed steeply through a red rock box canyon. I had the eye of the tiger for a little while and was crushing the uphill, even with all that weight on my back, but was stopped in my tracks suddenly by a big scary beige and black snake crossing the trail. Queen B said it was not that scary but I disagree. The trail climbed pretty much the rest of the day and around sunset we found a place to camp in an aspen grove on the side of the trail. 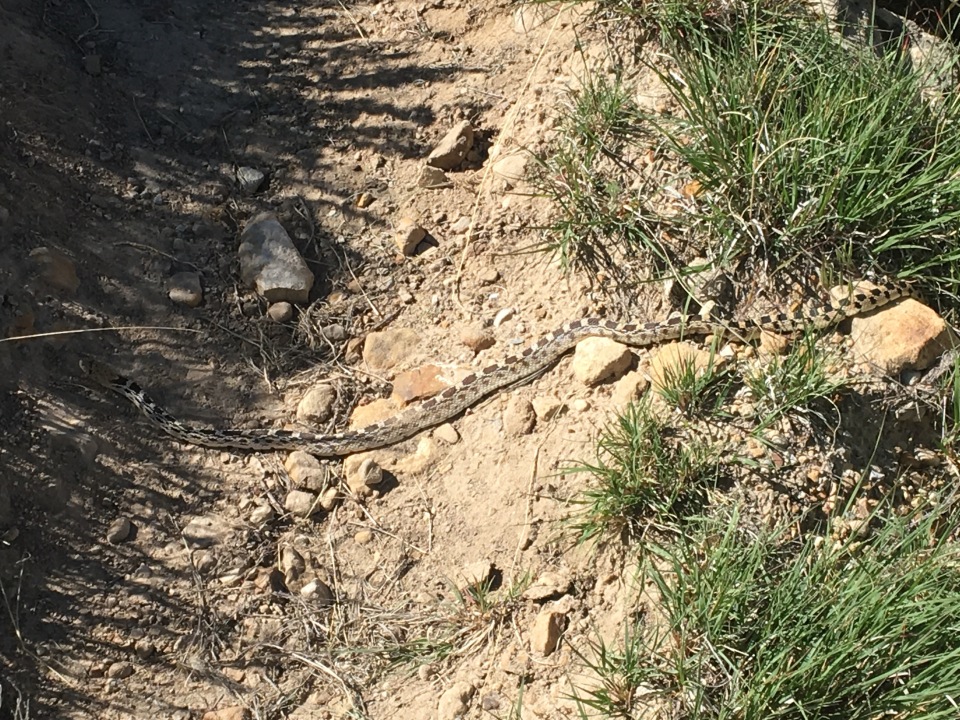 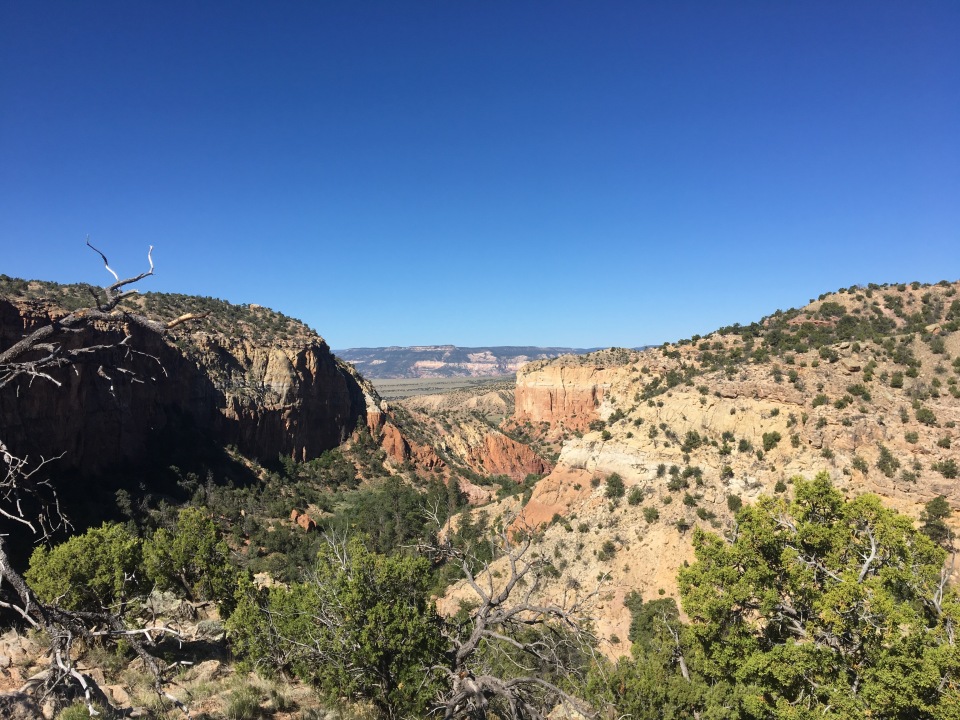 I counted well over a million dandelions

As I was falling asleep last night it seemed pretty warm, unusually warm, but I woke up around 4:30 and was super cold. The temperature must have plummeted at some point during the night. I got going nice and early and until the sun showed up the temps were pretty low. I saw lots of animals this morning; including a good sized cinnamon colored black bear that I must have spooked because it was running in the opposite direction, lots of elk even one with a tiny calf and I saw a tiny deer fawn. The hiking today wasn’t the easiest though. Early in the day we came across lots of blow downs, I think there was a mudslide or something through this section recently. Around 9 am we got up over 10,500 feet and had to walk through snow for a few hours. We all wore our microspikes for the first time and this greatly improved my traction but I still managed to posthole a few times. This isn’t the most pleasant experience, especially while wearing running shorts. The trail eventually brought us down to a valley with the mighty Rio Vallecitos running through it. With a dangerous crossing ahead of us we decided to put it off until morning. There was good camping in the nice flat meadow next to the river and since we quit a little earlier than usual the rest of the afternoon and evening was spent relaxing.

I love this trail

Great day out here! Started off crossing the mighty Rio Vallecitos on an icy log. I felt like Dana with his slick shoes in Goonies. Right as I got close to the other end, I slipped pretty good and almost went in but managed to catch myself on a branch. That was close! The rest of the day was uneventful but just all around awesome. We climbed up through a pine forest and then walked for miles through a huge open meadow or a mountain park. The last few miles brought us through an aspen grove and then down to a meadow containing the Rio San Antonio. This was quite the picturesque place to camp, I felt like I was inside an REI commercial.

Queen B carefully mapping out her steps across the mighty Vallecitos

Lots of elk in this meadow, just not in this picture

walking through an aspen grove 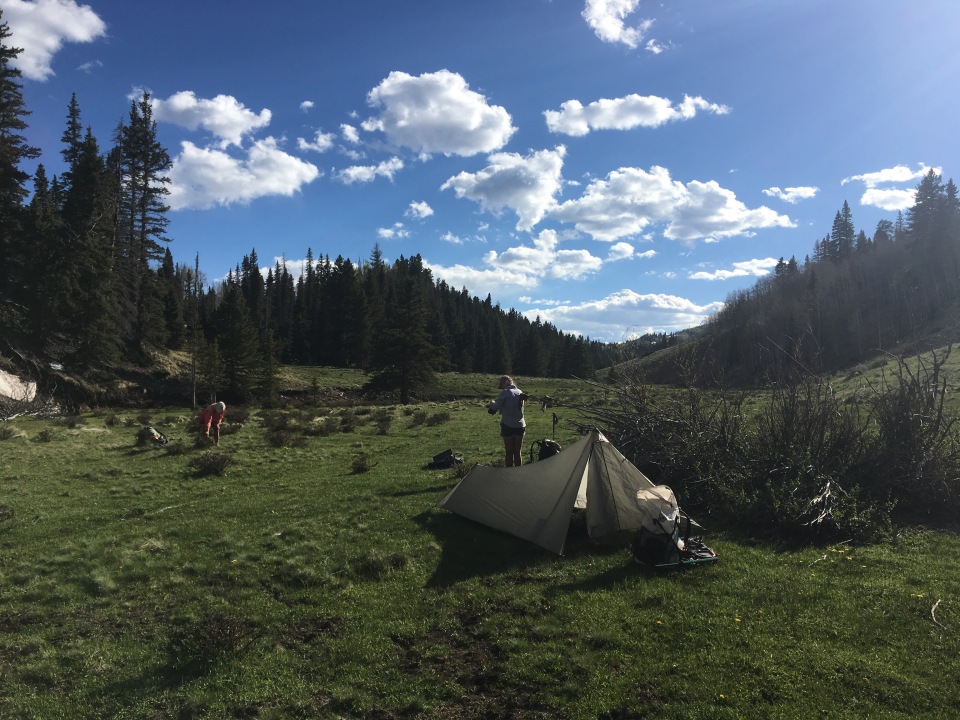 this REI ad actually came out of a magazine

1 month on trail, and what a month it was!! This was also our last full day hiking in New Mexico as tomorrow we should be crossing into the Centennial State (Colorado). First of all, I love New Mexico! It’s a beautiful state and the trail has been awesome through here, very different landscapes throughout and anything but repetetive. What stood out the most to me was how few people have been out enjoying the outdoors in the Land of Enchantment. Anyway today was a good day although maybe a little tougher than usual. I woke up to frost all over my tent, probably because I was next to a river and in a low lying meadow, also my tent was out in the open. Rookie mistake. Oddly though, only a couple hours after waking up with frost on my tent, I found an alpine lake to swim in. It was exhilarating. As luck would have it during this last section, the trail passed by these primitive campgrounds with pit toilets everyday around 9am. Let’s just say I haven’t dug any cat holes lately.  I guess sometimes it’s better to be lucky then good. Alright enough of that personal nonsense. Today we walked through a good amount of snow and the navigating wasn’t simple but the scenery was incredible as usual. We stopped a little early at a nice dry spot because if we carried on any further we’d be sleeping in the snow. 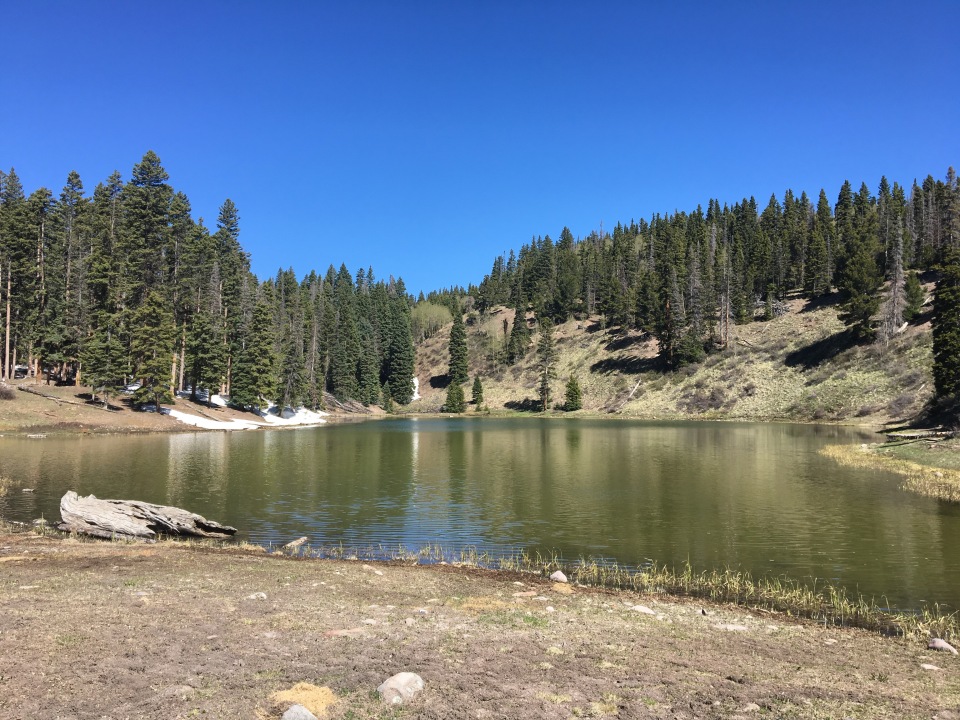 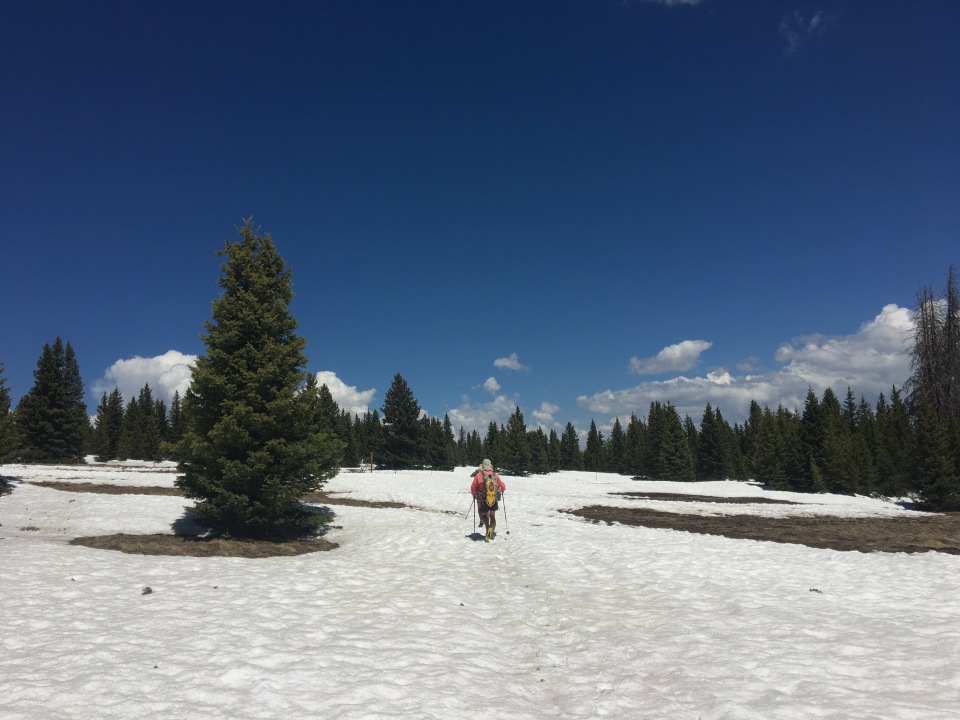 Speed cruising through a snowfield

CDT is so rad 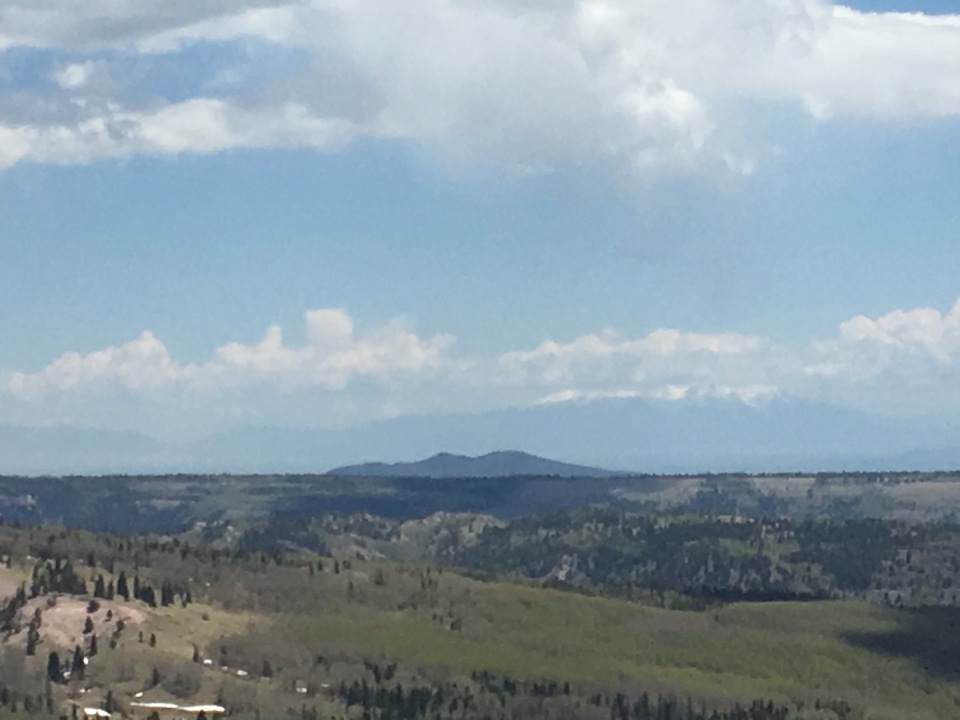 the beefy San Juans in the distance, the snow capped ones, not those little peaks in the foreground

Shortly after breaking camp this morning we found ourselves putting our microspikes on and walking through miles of snow. After a few hours we crossed from New Mexico into Colorado finishing our 1st state. This was a big deal and a major milestone on the hike. I love New Mexico. The scenery has been beautiful and diverse, the people are friendly, and overall I think the place is underrated. I spent a week in NM a few years ago and I really liked it then but after walking through it over the past month I’ve grown quite fond of the place and felt a really strong pull to the state. Maybe someday I’ll buy some land out here with access to some nice trails and possibly a hot spring and put a trailer or a shipping container on it to live in. Maybe not. Until then keep reading this blog and I’ll probably tell you about falling in love with Colorado again. Right now I’m relaxing in the town of Chama, NM. We got to Cumbres Pass, CO shortly after crossing the border and hitched left to the closest town that happened to bring us back into New Mexico. As always feel free to follow me on insta for more pictures. @endlesspsummer 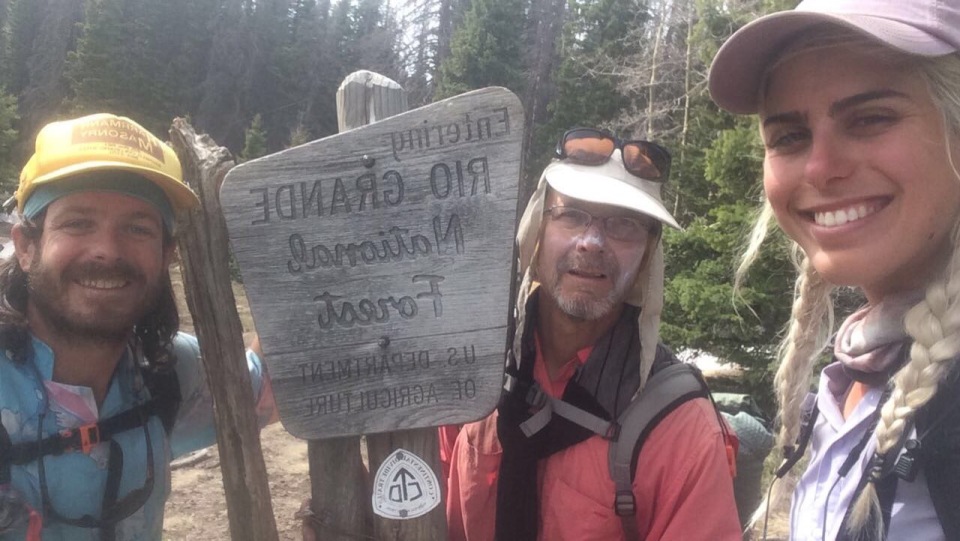 Me, Speed and QB at the NM/CO border 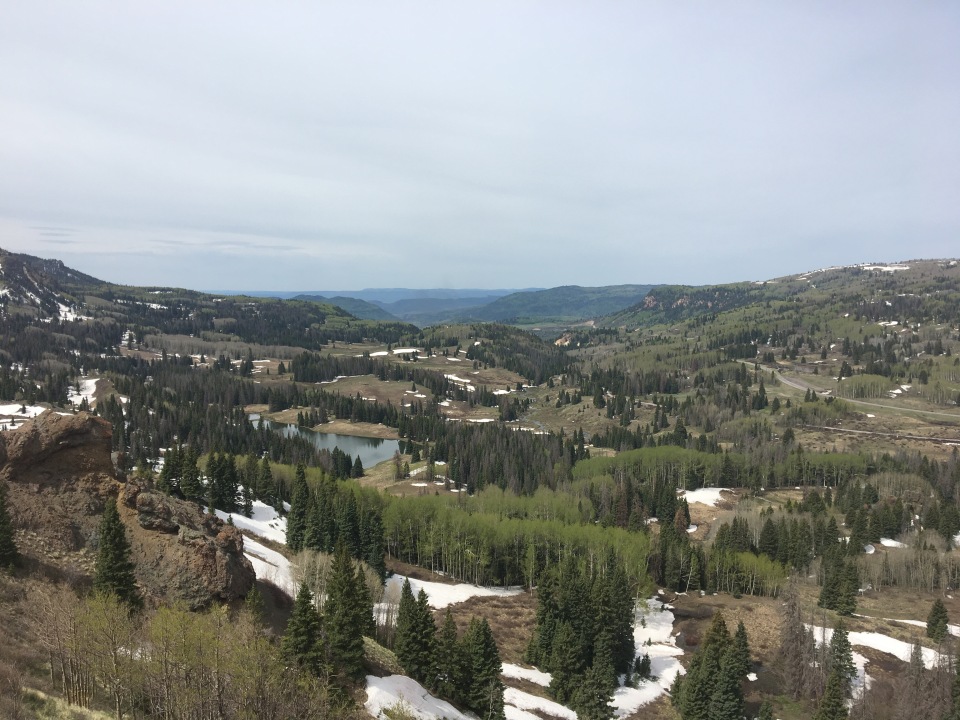